NEW EPISODE
BANGALORE
Sometimes mankind tries to dominate nature, but nature forces are stronger.
PAGE 1
PANEL A
One of the main streets in Bangalore. Streets are flooded, it is raining heavily. Water is standing in the street up to the windows.
TEXT BOX 1
Bangalore. November 04, 2020
OFF-PANEL 2
It hasn’t stopped raining since 5 days. People were forced to leave their houses alone to get to safer places in the hills behind the city. Many shops…

I would like to make some suggestions to the next Evoke Episode. Fistly, the application has to become more user-friendly. This means that some improvements on the website could be made regarding the layout, the buttons and user profiles. Further applications could be inserted, like implementing a live-chat amongst the members, or live-chats with alchemy or other Evoke members. There were some internet links not working, and all websites linked should be proofed regarding their actuality.…

For me, a main insight is the scientific standard which differs enormously from the news media reality. We have a very famous newspaper in germany which is a very good example for the gap between science and media reality. The "Bild" Newspaper has little text blocks and many pictures, and its headlines are always instigative, polemic and in many cases worse than the facts in reality are. Here is an example, an old Bild headline about poverty in Africa, accompanied by effective…

I chose the case study of sacred groves in India. Sacred groves are zones in the wood or in the field with holy trees that are dedicated to a deity. A sacred grove could look like this: 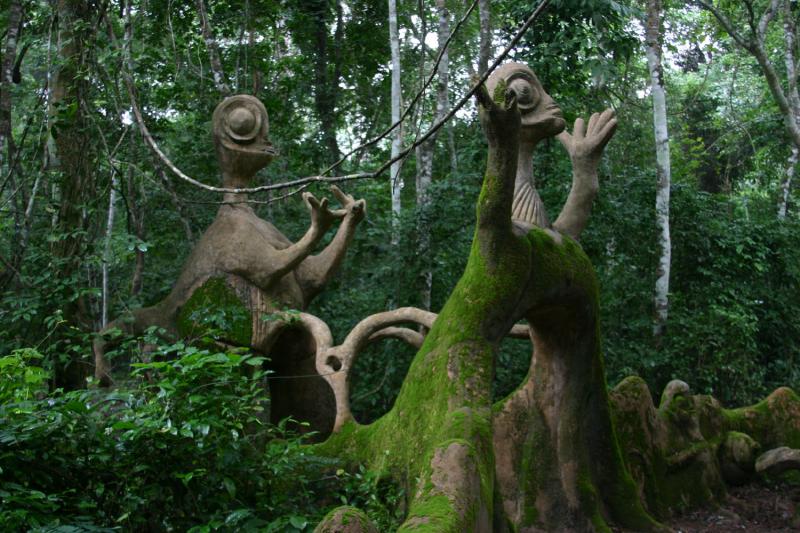 The areas of sacred groves are getting smaller and smaller caused through farming activities or urbanisation. In this special case an endangerment of an area of sacred groves…

My imagionation of the world water day is, that all the people in the world colour themselves with water-based non-toxic colours that have been specially developed by chemical laboratories and have the function of eliminating germs in the water. On world water day, all the people in the world altogether take a bath in their local rivers, lakes or in the ocean and in this way contribute to the global water purification. The Event could look similar to the Indian "K**b Mela" Party of which I…

It is May, 6th 2020. It is my birthday dinner! I prepared a three-course menu and invited some friends to my home. The first course is Basco, an indonesian soup with vegetables and glass noodles, but without meat. Meat consumption has been restricted by the European Union, in the way that every person in a first world country is allowed to consume meat only one time per week. Therefore we will have meat for the second course.
Because I have always loved italian food we are having an…

Crisis handling with Ushahidi in Nuremberg/Germany

Also here in Germany it is possible that a crisis happens. This could be a flood caused by heavy rainfalls as we had in the past, or through a nuclear incident caused through an explosion in an atomic power plant. We had a similar accident in 1986 when in the city of Tschernobyl in the Czech Republic an atomic reactor exploded. Tschernobyl is not so far away from Nuremberg, and it was dangerous to play in the sand because nuclear clouds were blown from the czech republic to germany. In the…

Yesterday I took part in an experiment using an alternative currency. The system took place as follows: every team had four players. The team played 30 rounds together. Every round, every team member was able to decide how much money to put into a community account. After every round the community account was multiplied by 2.5 and divided by four, and everyone got the same portion of the total sum. But the more you put into the account before, the more has also been deducted when calculating…

We start our holiday to southern Italy in the year 2020. I am 36 years old. My two children, Katharina, 5, and Jonas, 3, can't wait to see their grandfather who lives in Italy. We pack our car which is an electro mobility car full of luggage, food and drinks for the journey. The food is from our local farmer, and the water is from the local potable water processing plant. We pass the austrian Brenner by paying our fee by the electronic eco-payment system. Because we have an electro mobility…

The internet article
http://www.unfpa.org/public/cache/offonce/home/news/pid/10804 of the UNFPA describes the reasons and possible solutions why still today more than 800 women and 20,000 children die every day caused by the lack of commodities in the situation of child birth. Also, cotraceptive methods to avoid unwanted pregnancy are treated in the article. Contraceptive methods like the condom are known but…

In my opinion, the system of "Mahila Milan" is a very good idea. Normally people in this social level would never save an even small amount of money daily. Without savings, people are never able to build up a capital stock which can keep them from poverty. They are not able to offer their children a perspective regarding their education because they do not have money for school or university, for example. Mahila Milan focuses on women which is another positive point, because women in poor…

I'd like to show you a project of the Organisation ESAF in cooperation with the website water.org. They made the "World Water Day" in Kashiram Nagar, India. This event was aimed to show people how to conserve water effectively. I think a main problem regarding lack of potable water in the world arises from the people dealing in a wrong way with water. One the one hand, in western european countries people waste a lot of water and use, for example, fresh water for purposes where it is not…

I chose the Business Idea of Gyanesh Pandey (like many others, probably) as an example for social entrepreneurship. His company probably is one of the biggest and therefore best-known examples for social entrepreneurship at the moment. Pandey developed a method how to make electricity out of rice husk, which is a usual waste in India. The company "Husk Power Systems" serves around 92,000 customers in their metropolitan Area in India at the moment. Husk Power Systems won a Business Plan…

My dinner in 2020 would consist of vegetables I have been growing on my own in the countryside of our village. The meat is from our local farmer, and I eat only as much meat as I need. We get fresh milk from our local farmer too, and fruits can be taken from our own trees in our garden. Practically, this imagination is not so far away from today's reality. When I was a child, we already got our milk from a local farmer, and my grandfather and me always went there by foot with our milk cans.…

Regarding the food security topic, I informed myself about agricultural issues in Germany. One in my opinion interesting topic are milk prices in germany. already, milk is not an expensive good, and it is to be questioned if the current prices for one liter of milk are fair (from 45 to 85 cents/liter). Furthermore, in 2015 Germany will leave the so-called "milk quota regulation" of the european union. until now, every european country was allowed to produce a certain amount of milk to avoid…

In 20 years I imagine myself - in the best case - being as happy as I am now, with some objectives in my life having reached already like children, a finished master's degree and hopefully a good job in which I earn enough money for my family. Hopefully in 20 years there will be less missions to be fulfilled because for all peoples life on earth has improved, respectively people have found a way to solve some of the existing social problems in the world. i also hope that some governments…

I choose Deb Levine As my hero who founded the ISIS Internet Sexuality Information Service. This Platform has the aim to inform young People about sexually transmitted deseases, HIV and pregnancy. These topics are important for First World As well As second and Third World countries. Also, in many countries Women do Not yet have the Liberty To decide about their sexuality on their own. Regarding this topic I refer To the Book Desert flower by Waris Dirie in which the Life of an African Girl… Continue

My favourite secret is Ethan Zuckerman's advice not to fight culture. Culture is very important for market mechanisms and therefore we should respect it. We can improve other people's lives through respecting their culture and use the mechanisms of the social market economy to bring products to them that could help to provide better living circ***tances.