This site is going to be improved as I have not yet put the required information completely. Also I'm planning to create the Bahasa version for this site that it will be easier for people to follow and respond.
Here is the link:
https://sites.google.com/site/natsemergencydarksite/

I've followed David Suzuki on twitter, he's a great scientist and environmentalist.
https://twitter.com/DavidSuzukiFDN
Also as I'm curious about KIVA, and wondering if it can be modified or contextualized and then applied in my current community, hence I'm following KIVA on twitter and would be great if there is opportunity to discuss my concerns with people who knows KIVA…
Continue


Are found in every corner of the garden prepared for my grandma’s birthday.


This evening is special, the…

The Strength of The Youth

The youth..
They are definitely an asset in this kind of situation. Youth that full of energy.
Will be far more better if these young people have varied skills.
They will reach their fellow all around the region, and all of them will be data gatherers, that will be sent to Ushahidi. First step done!
Then they can also help in providing meal for the people,…
Continue

Culture is one of my concerns.
So, i think these two will be part of indigenous knowledges I'm gonna share.. 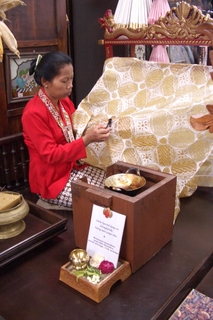 1. Batik Painting
Each area/region in Indonesia has its own batik motifs. For some areas in Jogja and Central Java, it might look just the same. But it is not.
And each motif has its own philosophical meaning and usually worn in different special occasion. For…
Continue

"You're afraid, I'm afraid too. We're all afraid. We'll get through this together."

How many markisa i will get for these ten mangoes??

Talking about barter system, it's been a while since i did that.

If i have to share of how it feels when practicing it, i might prefer to say that it depends on what kind of barter system i've tried to practice.

If it just a very simple barter that involve only for example my friend or my brother and i, that would not be as interesting as that with a seller in a remote area. This kind of barter is far more exciting as i have to learn first of what the rule is. I have to… Continue

- People will not be resistant to changes as long as they can see the tangible and intangible results. In creating a program for natural resource management there is no doubt that people will ask the question "What’s in it for me?" -… Continue

"Chocolate-milk River" - do they have at least a choice??

Approximately 60% of human body, our body, is water. Each of us needs water..

How long can we survive without water??…

What Will Happen If No Fruits of The Earth Anymore??

"Water Is Now Available in Their School's Backyard"

Talking about water and sanitation, usually it is problem in rural or remote areas.
The playpump is wonderful, remind me of a story, a touching one..A real story and real people.
A story about children in the remote area, one of our intervention areas.
Once upon a time, there was a sponsor who has sponsored child in one of remote areas knew that in that placethe availability of water was a problem. Then shortly, this…
Continue


What is my life like in the future?
The same question I just asked a group of youth I’ve facilitated this afternoon.
As I previously shared about myself, I think besides sharing about the girl I’ve been helping through the organization i'm working with up to this recent time, I also have to continue sharing about what my life is like in the future.