1. The Place. My proposal is to make a difference in two places, the first being in Renton, Washington state and the second being in a virtual space that is available globally. Planting the seed in my current local community of Renton will keep costs down for the seed funding while allowing me to easily utilize regional…

The goals of the EVOKE network are to have fun while developing the skills, power and community to change real-world issues and manifest creative solutions to existing problems. The EVOKE network works by empowering people through non-threatening game scenarios to feel energized and solution-oriented. Network members include anyone from around the globe that has access to a computer with the Internet and is able to read and write about the game missions. Being a good EVOKE agent involves not… Continue

EPISODE 11
USA
“Education is not filling a bucket,
but lighting a fire.” William Butler Yeats

Inside a suburban American home in the evening. We can see a white, American woman seated at her computer, with stacks of paper piled high around her. She is a high school science teacher breathing a…

WHICH great challenges and social problems should the EVOKE Network tackle next? Education! Much of the education systems built in the world today were created during the industrial era, so we imagi…

Education! Much of the education systems built in the world today were created during the industrial era, so we imagined children as little products with parts added on at each stage. Now, we know each child has special needs and that system is breaking down, especially in the US where funding for education is based on location, keeping poor people uneducated and rich… Continue 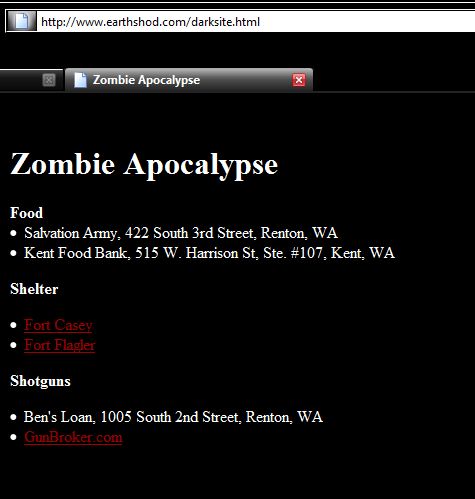 As a volunteer chaplain at a major local hospital that serves communities of many cultures nearby, one of the barriers I've noticed to health care has been language. When somebody is dying, it is heartbreaking to have to make a call to a translator and not be able to get service from an in-person translator in time, having to use a telephone translator or none at all instead. I think that, in a future pandemic, bilingual and multilingual people could be mobilized to communicate important public… Continue

After exploring
The five secrets of Crisis Communication, I decided that the one piece of insight that I think is the most important is Coming
to Terms With… Continue

It is the year 2081, and the religion which I practice, Wicca, is now 127 years old. Though it was considered a modern and new religion in my early years, I am now considered a respectable Elder in a practice that is over a century old. Originally, British Traditional Wicca was considered indigenous to the British isles, and my branch of that practice is lumped under the umbrella term "Central Valley Wicca," since it was brought to California over a hundred years ago. I am now proud to add to… Continue

Though modern Western WitchCraft that seeded the Wiccan religion I practice in the United States today only experienced rapid growth starting in the 1950's after the law against WitchCraft was repealed in the UK, I chose to create Witch's Runes that were developed right here in the United States where I live, by Susan Sheppard, who published a book about them in 1998. I created them from local stones. They are a fortune telling tool that can be of interest to local people now and in the future… Continue

The case study that I picked out from the KIVU (Knowledge, Imagery, Vision, and Understanding) Project for Indigenous Knowledge was "Participatory Research Mapping (PRM). Using Maps of Indigenous Land-Use Patterns To Help Indigenous Peoples Claim Land Rights in Honduras." I believe that the most important lesson from this case study is the emphasis placed on collecting oral descriptions gathered in public meetings and putting them into a… Continue 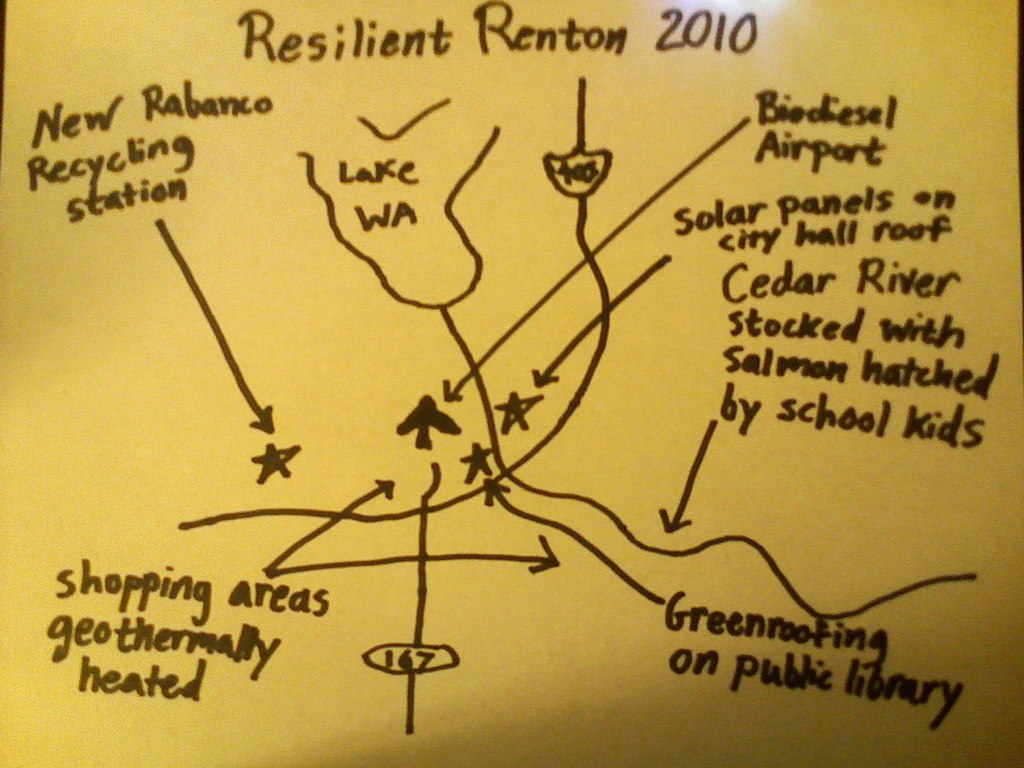 I've been doing a little research into my local city's resilience plans, and found quite a few with regard to sustainability and disaster preparedness, one of which I mentioned in my last Evidence blog post.

As I learned about Ushahidi, I thought about applications to a resilience plan already in place in my city for flooding. As a little background, last year the leaky nearby Howard Hanson Dam threatened my city due to its proximity to the Cedar River. As a resilience plan, the city set up a disaster preparedness plan with CodeRED Emergency Notification System. In case of flooding, subscribers to CodeRED, which may include… Continue

It is 2020, and the donation I made in 2010 to help build an environmentally sustainable clinic to help women in poverty in Nicaragua who have high-risk pregnancies has been completed. One woman, who otherwise would have died due to high blood-pressure during her pregnancy, survived and gave birth to a healthy child. So inspired was she, that she worked hard to become president with a beautiful idea for a perfect health-care model for her country that could then be adopted by other countries… Continue

The first news story I saw on WomenWatch that struck a chord with me was at the top of its list! "UN Expert on Trafficking in Persons Visits Egypt." This produced a gut-level reaction in me because the issue of selling sex has affected clients of mine on both ends of the spectrum, those who are pro-sex-work, and those who have been sold into slavery. One of my clients came… Continue 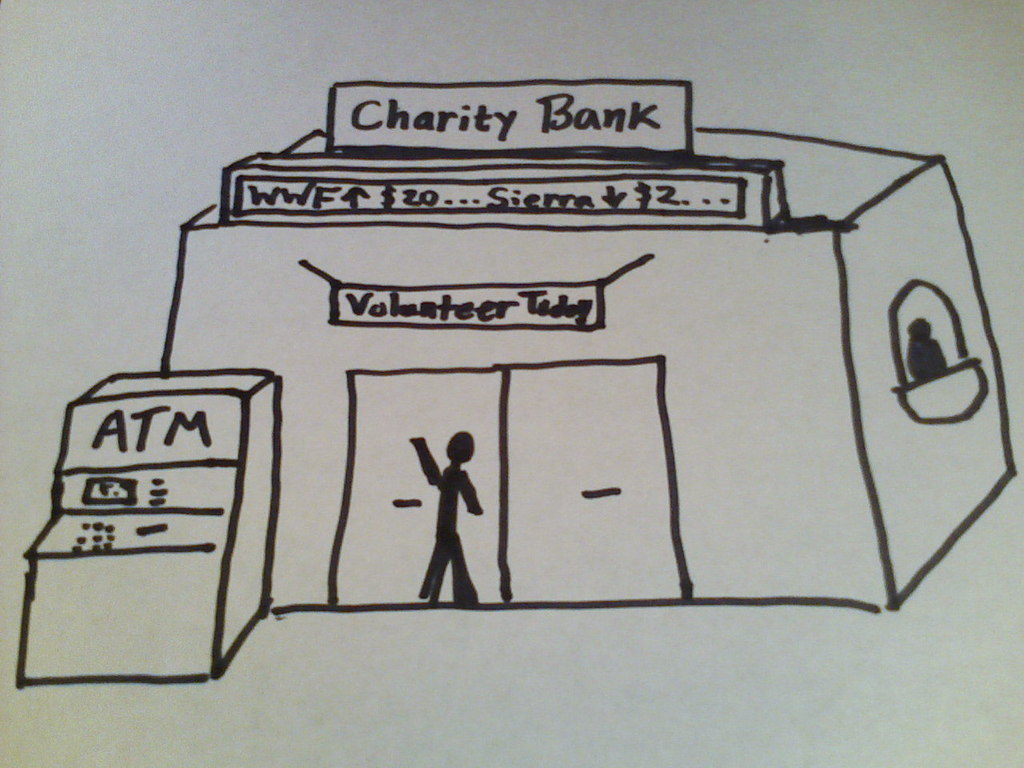 Inspired by banks decades ago, that donated small amounts of interest from credit cards or investments to Charity, the World Bank Institute has established the "Charity Bank." Not really a bank itself, the
Charity Bank is more of a brokerage, connecting individuals with their
favourite charities and empowering those charities to have FDI insured
bank departments so that, whenever their benefactors are saving… Continue

In my limited experience, the people I care about who need the most help are least likely to take hand-outs. So, there are a number of ways to receive help while putting in your own work and effort in exchange, and I'd like to see these systems increase. This week's examples come from two local community resources I found for pregnant women. Being pregnant myself, and wanting to save my financial resources while not wasting new resources by getting brand-new toys and supplies, I tried both… Continue

I'm going to admit to being a little ethnocentric with my money. I worry about my own investments when I'm relatively rich compared to many people on this Globe! As a result, one of my favourite ideas for the future of money is socially-responsible banking and investing. Every time your money sits in the bank, the bank is using it for their own stuff. So, I like to make sure that my bank is using that money wisely instead of investing it in high-return things with which I don't ethically agree,… Continue

It is a rainy World Water Day in 2020, but I am excited to be at a special gathering unveiling a project that has taken quite a while to accomplish. While another Social Innovator is unveiling a much anticipated energy-efficient reverse-osmosis device, I've planned something that involved a few more people in its undertaking. It started with my connections with teaching and my local Chamber of Commerce education committee ten years ago, and turned into a stellar talk of mine delivered at the… Continue