H
[ Copy this | Start New | Full Size ]
HI Evokers,
SamiranRoy has enabled a chat engine inside Evoke!
This to make clear that the merit and the vote should go to…
Continue

Hi all,
I just joined Hopephones which is an effort to collect mobile phones to distribute among people who can benefit from having one.
Think about it, maybe you or friends have one or two that just sit in a drawer.
Peace.

LESS of US will do the trick!

Inspired by aspects of Iron Helix 's truly impressive post, I write this post on a subject I haven't really run into on Evoke. Or did I not look hard enough? (also a distinct possibility).
OVERPOPULATION.
Apart from the knowledge that, in fact, there are enough resources on the planet to feed, educate, give health care to, etc. all people alive today, there remains the question:…
Continue

I found this four part video to be EXTREMELY enlightening as to the root of current global problems. Never mind the dramatic soundtrack.
I think if we want to think about the Future of Money, we should be willing to question the System behind money and its relevance to today's state of the planet.

KIVA answers to the DRAGON search : )

Here you can read the answer i received from Sarah Curl, KIVA's Customer Service Volunteer to my inquiry into the possibilties of opening a direct line of communications with people the EVOKE-KIVA team lends funds to.
At the bottom is my initial mail.
If u want to join the EVOKE-KIVA team: we are here…
Continue

As my hot water boiler here at home lights itself to heat up my running water by the flow of this water through a dynamo which delivers the spark for the flames, I had this idea:
Design a dynamo mounted on a common household tap that revolves when you let the water run out of any tap in the house. Whenever I take running water then, I will be using the kinetic energy from the flow of water to generate electricity, which i can store.
This…
Continue

(From our local correspondent) 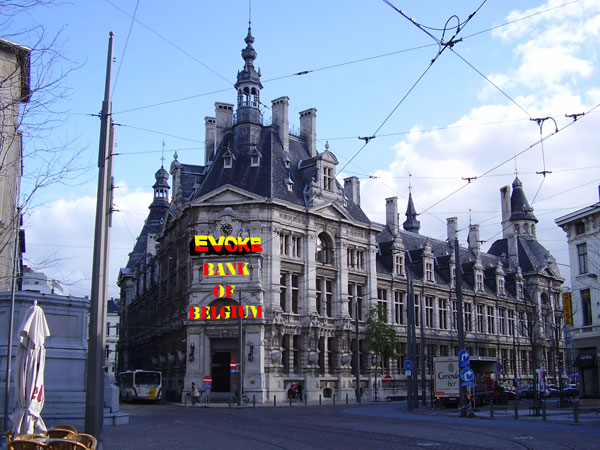 The mood was festive and expectations were high yesterday as Belgium had the scoop on being the first country to actually reform their National Bank into the EVOKE Bank of Belgium. The somewhat gaudy new sign (see picture) on the front of what was formerly "De Nationale Bank van Belgïe" in the city of Antwerp was the subject of quite some controversy, but, as the Belgian Prime Minister, Brick de Bois, stated, quoting the…
Continue It's a day like any other. People are at work all over the world, they work in factories, on their land, at home. Everybody…

We need INNS and GUILD HOUSES!

I feel the communication, especially the brainstorming people do on here as a collaborative effort, could very much improve if there were places I would call Inns or Guild Houses.… Continue

In case you want to look for daqta on all sorts of subjects, including, for instance, the average amount of daily used water per citizen of a certain country: here's a DataWIKI:

Indeed.
If you want to find out how you can watch the very informative and rather hilarious TED talk by chef Dan Barber. He will give you an idea of fish breeding, the how nots and also the how to's.
He introduces you to the work at La Veta Fish…
Continue

A basic human right!
I am helping "It's Agent T" in contacting organizations involved in or affected by clean water management, to fill in the Questionnaire for the Independent Expert of the Human Rights Committee, delegated to deal with the issue of making safe drinking water a basic human right.
WIth that aim I have sent the questionnaire to Cabiokid, an organization in the Phillipines developing…
Continue

Right. If we are going to think about the future of money we first need to know where it came from, what its history and background is and how its use, its meaning and its pitfalls have evolved throughout the ages.
If there is one thing we seem to take for granted it is that money is a good thing, that it is a great and efficient way to use for human transactions. It is, but...
Why, I wonder, are most, suggestions for the LEARN mission objective in the Future of Money about alternative…
Continue

Good news!
The Urgent Evoke KIVA team has 12 members now and those all seem to be spreading the word. I hope that the team will blossom and take the knowledge of KIVA's micro loans to aal corners of Evoke and beyond.
Make a difference. Suggest lending at KIVA to non Evoke players too!
Peace.

It's may 2020. Six people gather for an annual celebration. 28 years ago in may we bought a house together, to secure our own shelter and to rent out parts of it to other people. At the time it was a daunting risk to take. But in the meantime it has proven to be a great investment into our own future. At the outset we called ourselves 'OK unlimited' (OK stands for Opportunity Knocks).
Now in 2020 we gather again, celebrating with great food and nice drinks too. This year is…
Continue

I have decided to follow a personal Hero of mine on Twitter.
Bart Weetjens is founder of APOPO.
APOPO trains African rats for land mine detection and Tuberculosis detection.
More info in my Amazing Stories
Bart's Twitter link:
http://twitter.com/HeroRAT
Peace.

On the DRAGON 's tail

Well i just took the bull by the horns and wrote an email to KIVA and to the field partners of the people i gave a loan to through KIVA, letting them know that EVOKE players would like help in setting up a direct line of communications with some of the people we are trying to help.
Awaiting response.
I also informed them and now also whoever reads this that there is now a Urgent EVOKE KIVA team. Feel free to join.
:)…
Continue