I was gonna make a Google map of my resilient city, but I thought about it for a moment and that didn't make much sense. I think the infrastructure need for a resilient city is not structural, but informational. We need our residents connect through informational networks (compulsory and otherwise), not through a physical coming together.
Maybe that's a cop-out of an answer, but that's what I'm going with.

Ushahidi in the Developed U.S.

A unique way to use Ushahidi in the Southeastern United States? We're really not prone to many natural disasters. Earthquakes, hurricanes, tornadoes, and blizzards are all exceptionally rare. Combine that with are exceptional 911 service, and Ushahidi seems almost useless here. That is unless Ushahidi can actually report on a crisis that's not visible to the naked eye...
I'm not a germaphobe by any means, but I can see how it would be exceptionally useful to have everybody…
Continue

In 2020, I think the majority of teachers will be women... for both boys and girls, closely resembling our current gender roles here in America's educational system. That's it. Not much to say, but a lot to hope for.

Too easy. I'm in the Army. I've been to Afghanistan and I'm going back soon. This is what I do. I make situations possible to empower women in that country. This time around I'm going to follow Greg Mortenson's model.

Holy crap... I can't believe this wasn't mentioned in the mission details. If you have read Greg Mortenson's Three Cups of Tea or Stones into Schools, you are missing a seminal work on empowering women through education. If you care anything at all about this issue, you must read these books.

It's 2020. A new bank just opened up. They are strickly an online only presence. They have no brick and mortar representation. All deposits must be electronically submitted by scanning and then email your checks or you can mail your deposits to them, but they really prefer you don't. By the way, they've pretty much consolidated your wh*** financial life: checking, savings, equity and bond investments, insurance, everything. The name of this bank is USAA.
Oh wait, they've…
Continue

This is kind of drastic and we decided to do it before this mission, but my wife and I have decided not to save for retirement. Instead we're investing in as much education as we can, a few pieces of real estate, renewable energy systems, and building up a substantial emergency fund (~ $100,000 US). As for retirement, we simply just plan to keep earning money doing something we love doing, even if we only earn a small amount. If our properties are paid off and our energy is free, or expenses… Continue

The days of money are nearing an end. Essentially, what we've set ourselves up for in the developed world (and what is currently bleeding over into the undeveloped world) is a system of electronic credits. We simply have an electronic account that keeps getting debited. Money... rather currency... is no longer necessary.
However, this all has one very big problem... it can't last. At some point, be malicious or accidental, everybody's little accounts are going to be wiped…
Continue

I'm writing a paper about EVOKE. I was hoping you could leave problems you see with EVOKE in the comments of this blog so I can investigate and analyze them to try and improve the game. Thanks.

So, I like to find things in interesting places. I've studied Iran quite a bit and know that they have severe water issues and draw much of their water from desalination plants on the coast. Maybe talking to them about water and how what they're doing could be improved or transferred to other countries could open up some dialog on other issues. Did somebody say nuclear?…
Continue

I'm in charge of teaching the world the importance of water conservation and water cleanliness in 2020? Well if I'm in charge than nobody gets clean water for the wh*** day. In fact, we're turning off all the water to every faucet and toilet in the developed nation for the entire day. You want water? Go find it. You need to take a s***? See you in the woods.
Nothing like walking a mile in a man's shoes to show you the world needs to change... and by the world I mean…

To be honest, she's not really a water hero, she's a human waste hero. Her book is so powerful and informative however that I must make a mention of it here as I think reading this book would benefit anybody concerned (or unconcerned) with helping to fix our world society.
Kudos to Rose George and her book The Big Necessity. 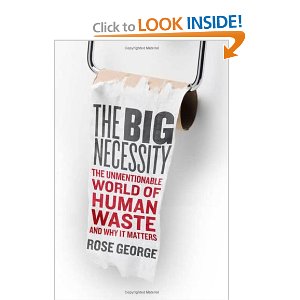 Available on Amazon.com in hardback, paperback and Kindle formats:…
Continue

Gotta love Halloween. So me and the wife are running the kids around the block for Halloween. Cool thing is, they're all dressed as working light bulbs. Even better, they light bulbs really light up. But instead of being powered by batteries, the energy for the light is being produced by my kids kinetic motion. Little power generators are drawing kilowatts from every bend of their hips, knees, elbows, and shoulders. Then, after they've collected all the candy they can carry, I take them back to… Continue

So, this was a hard one for me, but I found somebody... the entire population of Austin, Texas, USA. The citizens and legislators of Austin were the first US city to begin the implementation of a full-scale smart grid. Despite some bad press, I still see this as the future of power in the United States. Not only is it a great conservation tool it's an even better consolidation tool. Now when the power company switches off of coal burning power sources, so does every citizen.

Acting To Shift My Power...

Continuing with my theme of "I don't think a power shift can be accomplished through a distributed power source model," My act for Mission 3 was to figure out how I could interact with my power grid (i.e., local power company) better. So I went to Wal-mart (which I'm not proud of) and bought some outlet timers. So instead of having my cell phone chargers, my 52" LED TV, and my laptops drawing power all day, every day, now I am all drawing power during the times of the day that I actually use… Continue

To tell you the truth, I had a hard time figuring out what to do for a food security act. I mean, here in central North Carolina, food security is not really an issue. Homelessness and hunger aren't exactly rampant so finding someone who suffers from food security issues, much less helping them with it is a bit difficult.
Luckily though, my wife and I just checked our mail and there was my act. We got the 2010 U.S. Census! I've never filled out a census before so you'll…
Continue

In the next ten years I believe food growing and acquiring will revert back to a localization trend. People will grow and produce more and more of the food they consume or a barter system with those in one's local community will be used frequently to acquire the food stuffs one can't produce himself.
So here's the setup for my meal in 2020...
Continue

Food Security in the United States...

In the United States it isn't a matter of having enough to eat. Our extremely large brains and abundance of natural resources have led us on a food binge over the last 30 years that may bring back Darwinism in a very dramatic and unprecedented way. So, if we've got so much to eat here and most of us are fattening up for the hibernation that will never come, why do we still have people that go hungry here?
The answer is waste. According to Robin Shreeves of SustainABlog, the…
Continue

Well, let's first discuss what I'll be doing between now and then...
So in 2020, besides my research and teaching, I hope to be bridging the educational gap with countries that don't currently value a higher, broad-based, non-biased education like we in the West do. I'd like to…
Continue