I think the secret “How do People React in a Pandemic?” is very important, because you can learn how to react during a pandemic.

When people initially become aware of a risk, they overreact temporary in a short-term way. The knee-jerk…

If I'm 100 years old, it will be 2087…the world will have many changes, the information age will be in more advanced stage, the consequences of climate change will be more evident and so on. The future generation, at least in industrialized countries, will live in abundance and take everything for granted and don’t think about consequences of their behavior in respect to environment.Probably they will still sit from the screen and prefer to communicate with each…

I choose egyptian hieroglyphs, because it is very impressive how many thousands of years the knowledge has survived.

The hieroglyphic writing was used as a notation system for accounting,…

The RFO: Zoning as an approach to natural resource management

I choose the case The RFO: Zoning as an approach to natural resource management.

Okapis Fauna Reserve (RFO)  is a protected area of the Democratic Republic of Congo, which covers a surface area of 13,725 km2, or 20 % of the Ituri Forest (which… 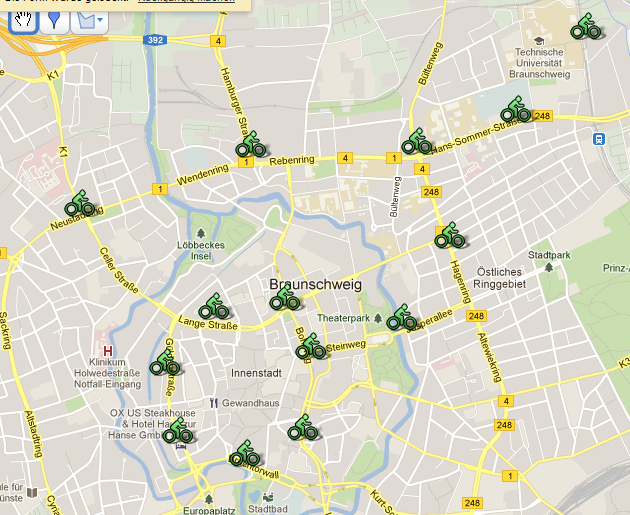 I think in the year 2020 bicycle traffic  will be increase in Braunschweig, particularly near to the campus, because many students are cycling and near to the city center.

The following Linkprovides informations about the climate protection concept in Braunschweig.

This concept is based on "Energie- und CO2-Bilanz"created in 2008. The…

I am originally from Cuxhaven, where floods occur from time to time. On 09 November 2007 was the last storm surge with water levels about 2,30 - 3,30 m over the mean high tide. Outer harbour and the "Deichstraße" have been flooded, whereas the damage was minimal.

I think, the girls and women empowered by my favorite Global Giving Project "Provide Scholarships for 20 Rural Guatemalan Women" would have an education and a job, so that they can provide financial security for their family. Their children would have the opportunity to go to a school too. The project itself would get bigger and global, because it would be also supported by the past Kateri Education Fund recipients.

Guatemalan girls and women have no access to educational opportunities,Their education remains low, particulary for Indigenous women, who complete an average of 3.1 years of schooling.The Kateri Tekakwitha Education Fund allows these women to remain in school beyond elementary school. The women attend monthly workshops, which help them with career, economic and professional skills.

"The ILO (International Labour Organization) is the only tripartite U.N. agency with government, employer, and worker representatives. This tripartite structure makes the ILO a unique forum in which the governments and the social partners of the economy of its 183 Member States can freely and openly debate and elaborate labour standards and policies " (…