I have selected the following case study: http://srdis.ciesin.org/cases/south_africa-003.html It's about the Pilanesberg - National Park: The following summarizes the most important facts.   „Bac…

I have selected the following case study:

It's about the Pilanesberg - National Park: The following summarizes the most important facts.

Pilanesberg National Park (Pilanesberg) is situated some 150 km northwest of Johannesburg in what is now known as the North West Province of the "new" South Africa (SA). At the time of its planning and development it fell under the government of the erstwhile homeland of Bophuthatswana (Bop).

The land which is proclaimed and managed as Pilanesberg is a large (diameter of 30 km and circ**ference of 100 km) extinct volcano that last erupted some 1200 years ago. […]Geologists claim that the Pilanesberg is the second largest and most symmetrical alkaline ring complex in the world […].  […]

This unique geological phenomena with the resulting unusual and appealing landscape coupled with a genuine desire to uplift the underdeveloped local community were the major factors that stimulated the idea of proclaiming the Pilanesberg as a national park. […]

The master plan for Pilanesberg was completed in 1978. On the basis of this plan, negotiations and participative decisions commenced between the neighbouring Bakgatla (hereafter referred to as "the community") and the Bop government. This process was successfully concluded by early 1979 and the park, comprising some 55 000 hectares, was finally proclaimed and opened in December 1979.

In compensation for this the Bop government agreed on the other hand to grant the community a "package" of rights, privileges and benefits which included inter aliathe following:

Based on these agreements, Pilanesberg was rapidly developed by setting up management structures, park infrastructure, re-introducing wild animals, and rehabilitating large acres of land that had suffered centuries of abuse from inappropriate land use practices. […]

Park management and government even failed to honour essential aspects of the agreement with the community. This included land compensation, reimbursement of resettlement expenses, access to the park and a percentage of entry ticket sales. The crowning point of this reneging on agreements was the exclusion of the local chief (Chief Pilane) from any park decision making forums when the Bop government abandoned the Pilanesberg board of trustees in favour of setting up a "National Parks Board" for Bop (in 1984). The result of this was the cutting off of all forms of communication with the community and effectively marginalising them from Pilanesberg.

Despite all this, Pilanesberg management continue to implement the basic principles of sustainable utilisation. Some 6 years after the establishment of the park, 250 jobs were provided, about 20 tons of relatively cheap meat was sold to the community, 10 000 school children visited the park per annum for environmental education courses and substantial foreign exchange was generated through trophy hunting and tourism (Molope 1988). […]

The community’s negative perceptions of Pilanesberg increased to a level where management could no longer afford to ignore them. This was a classical example of how public relations usually works in practice. […]By 1983 "the pain had become so acute" that management appointed a sociologist to conduct a survey of the perceptions, aspirations and attitudes of the local communities in relation to the park (Keenan 1984).

The findings of the sociologist were analogous to "opening a can of worms". In essence the findings were as follows:

Eventually park management "threw caution to the wind" and took on the responsibility of trying to turn the lose-lose situation into a win-win one. They initiated dialogue with the community and managed to persuade the government to mandate them to act as an informal arbitrator between the government and the community. This resulted in the park management becoming involved in a prolonged process of shuttle diplomacy between the community village and the homeland capital. […]

Of longer term importance, the crisis that park management had had to face up to and resolve lead to a complete change in organisation strategy and culture. This was achieved through a strategic planning process lead by the chief executive and which involved a through review and reformulation of the organisation’s mission, objectives and strategies.

An important outcome of the strategic planning process was the overhauling and re-engineering of the sustainable utilisation and community participation approaches that was propounded in the initial park master plan compiled by Tinley and Van Riet (1978). Essentially these approaches became more appropriately a means to an end in the new mission. […]

By adhering to the above mission and following the supporting key strategies, park management made steady and meaningful progress with rebuilding relations with the community. To start with, the government gave in to the community’s demand for previously promised (but unspecified percentage) share in the park entry ticket sales. […]

However the most meaningful progress made was the establishment by the community of a legally constituted body, the Community Development Organisation (CDO). Park management played an important role in facilitating the formation of the CDO which is essentially a registered non-profit organisation composed of elected members of the community. Its main function is to serve as the custodian or steward of benefits (mainly money) emanating from the park (e.g., entry fees) or other conservation projects initiated by the community. In particular the members of the CDO are entrusted with ensuring that such benefits are used and/or invested for the short and long term benefit of the community. The CDO also serves as an important forum for communicating with park management issues such as airing grievances and identifying needs. On the basis of the motto "if the dividend is good it pays to look after the investment", it is now in management’s interest to continue to foster the continued functioning of the CDO and to ensure that meaningful benefits from the park continue to flow to the community through this body. […]

At a workshop held by management in 1991 to formulate a policy for Integrated Conservation and Development Projects (ICDPs), an attempt was made to identify and formalise the lessons learnt from the Pilanesberg experience. The proceedings of this workshop doc**ented five key principles for effective community-based development in relation to resource conservation. These are:

Seven years have now passed since these five principles were doc**ented and much further interaction between Pilanesberg and the community has taken place. Despite this passing of time and the gaining of a great deal more experience, these principles to a large extent still hold and can be applied in other community-based development situations. The Pilanesberg experience has perhaps reinforced some of these principles and given them higher priority over some of the others. Perhaps of even greater importance it has given the authors of this paper the confidence to focus on the more important principles. Accordingly we believe that in the final analysis, PA managers will not go for wrong if they adhere to the following simple principles.

A map of the National Park: Some pictures from the park: 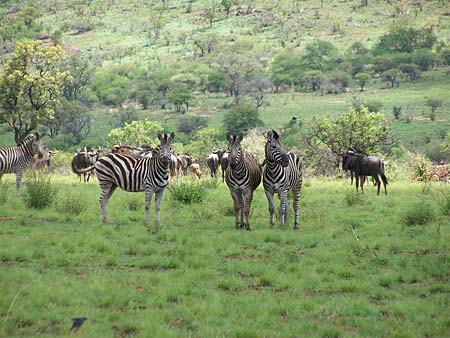