my resiliency improvements for Austin, Texas, USA is in 5 parts. most of my plans are based around redundancy and charity. there is also a major focus on the local community; localized centers give people a direct connection to sources that often seem out of touch. all of these will be networked to each other in a fully connected graph.
1) medical care
while there are several hospitals around, they would be insufficient to deal with massive scale emergencies. smaller free medical care clinics built around the city would take the stress off larger hospitals. they provide redundancy in the case of problems or failures. they would also be able to provide localized information and care specific to the community.
2) food
a network of sustainable food centers around the area would provide food security training and free/cheap food. these would be part farm, part store and part education center.
3) water
water is absolutely necessary for life. sustainable storage and distribution centers would collect water from a number of sources, including rain, sewage and existing reservoirs. in the case of plumbing infrastructure failure, these would become community water distribution centers.
4) energy
multiple distributed renewable energy farms would provide a much needed redundancy in the case of energy failures. they could store energy for emergency use as well. it would also be useful if they distributed free/cheap personal renewable energy generators.
5) housing
the homelessness problem can be mostly solved with a few projects. free tent/camping areas throughout the city would provide a free place for living and an address for work and business. low cost housing would provide a next step for those that want it.
6) transportation
Capital Metro, the local mass transit company, has finally started running its first train line in addition to its bus routes. i would see the train system expand and take over many of the bus routes, especially those along areas with heavy traffic.
there is also a fair network of bicycle lanes. i want to see more people using bicycles as transportation; making short trips in cars is very wasteful. to foster bicycle use, i would like to see bicycle rental stations at most train and bus stations. in addition, people will be used to alternate transportation in any emergency that prevents car and mass transit use. 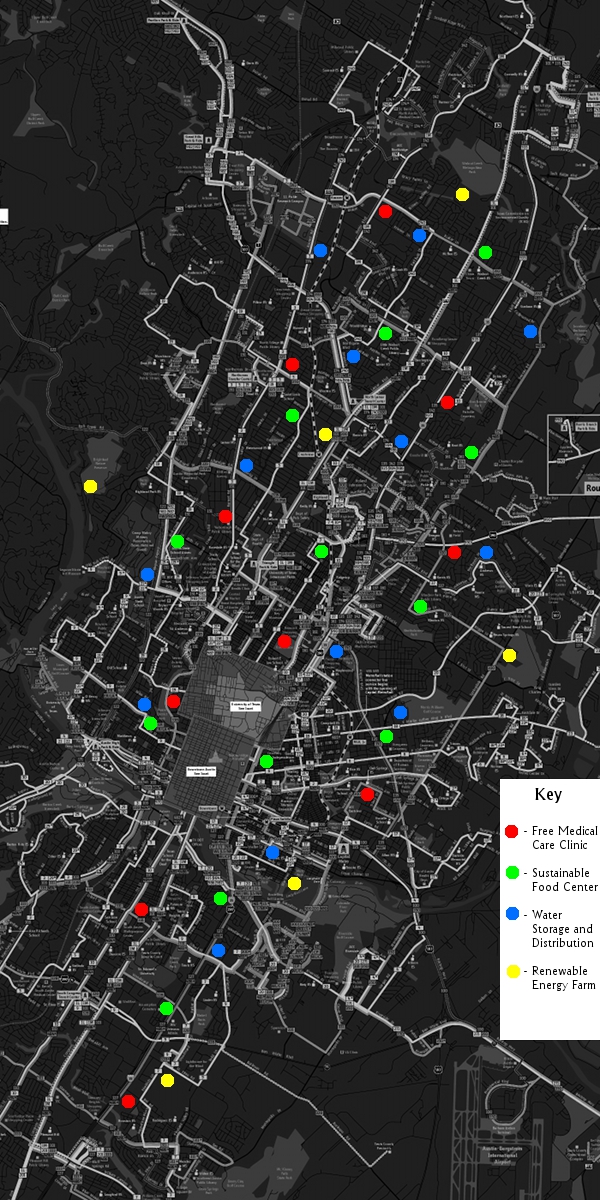