Banking for robustness: Dr Doom and The Black Swan to lead the European Central Bank 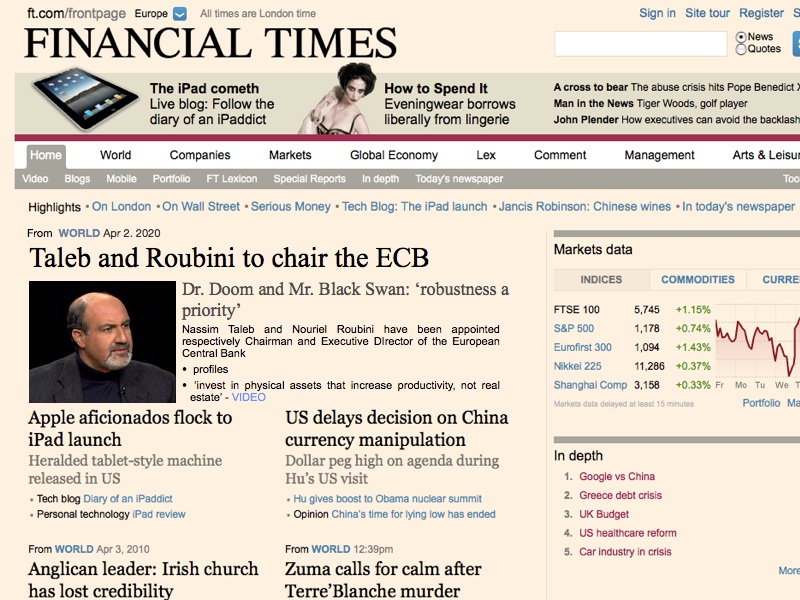 April 2020. In a move that credibly signals a will to push for reform, the European Central Bank starts to reinvent itself. Two brilliant, unorthodox scientists are charged with leading it through the reform process: epistemologist/statistician Nassim Taleb (nicknamed The Black Swan, after his best seller book) and economist Nouriel Roubini (known in some circles as Dr. Doom, for correctly predicting the 2008 crisis). Their mandate is consistent with their thinking: financial institutions should be redesigned for robustness.

Mr. Taleb's contribution lies mainly in getting rid of "bogus" measures of risk used in the past, that are blind to the coming of large unfavourable events (black swans). Mr. Roubini is more concerned in engineering the policy tools that will help the new ECB build its vision. Both scientists agree that
An announcement from Frankfurt states that Mr. Taleb is going to take charge of the recruitment of ECB staff personally. "Banks have historically tended to hire dull people and try to make them even more dull. That age is over."

The news have rocked the financial world, with City of London bankers specially enraged. Despite this, early market response was appreciative: the euro jumped up 3% after the announcement was made. An ECB spokesman has declined to comment on rumours of connections between the newly appointed chairman and executive director and EVOKE, the mysterious network of social innovators.

The following video, dating back more than 10 years, show Mr. Roubini and Mr. Taleb already in perfect sync with each other.

Comment by Joshua Z on April 4, 2010 at 11:47pm
Excellent piece of evidence which personifies two of the greatest ideas yet -- reducing debt, and anchoring risk at the level of lender.

Comment by Wintermute on April 5, 2010 at 12:13am
Great debate, the anchors are actually curious about what these too know.