I finally picked one thing to make for the action part of this week's mission. I had so many ideas! And I'm actually going to add some more small things, once I can get the materials...

But for now, this is what I've created, the earth box, in which I've combined native wisdom from the Wampanoag tribe from the Eastern Massachusetts area and my own ideas about the future of human natives of the wh*** Earth. While researching native peoples (for which the best information seemed to come from the Boston Children's Museum, of all places) I found a quote that really moved me:

And then I found another one:

The four colors on the Medicine Wheel represent the four races of people. The reason that there are four is that the Creator created all four - each one with a specific responsibility and special gifts. In order for people to live together on this earth, everyone has to have their place in the circle. ~ Jessie 'little doe' Fermino of the Mashpee Wampanoag tribe

And I did some more research on medicine wheels, and found some wonderful philosophy about the elements that go into making a wh*** human, and a wh*** world, with each direction of the wheel - north, east, south, and west - each representing an element of life - mind, spirit, heart, and body, which are the elements I also include in my own philosophy of life. So I took those two ideas and combined them into some words and images to put on my box. Now that the box is done, I'm putting in four real things that represent the four elements of life of the medicine wheel. I'm putting in the very meaningful clay heart made from pink clay that that my husband and I found on the Wampanoag reservation on Martha's Vinyard when we first got married, to represent the earth. I'm planning on collecting some rain water from where we live now, in some pretty glass container, to represent the water of life. I'll probably put in another bottle of air from the ocean nearby (unless I can think of something else to represent air). And I plan to collect seeds from local native plants this summer and fall, and put them into the box, to represent the fire of life, and as a way to preserve local native plants for future generations. I'll include some information about the meaning of the elements, as well as a description of the plants and what they traditionally were used for (medicine, food, rituals, etc.), using the Native American Ethnobotany website. (I'm definitely including wood sorrel, because it's not only a yummy lemon flavored plant that has lots of vitamin C in it, but also because it's leaves are shaped like hearts!)


The box started out as a rather silly and frilly teddy bear jack in the box music box, which I properly disassembled after finding it in a pile of toys that were being abandoned when a family moved out of their house near me. 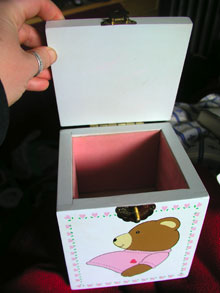 I used my grandfather's old file to remove the cute, but mostly unmeaningful bear. 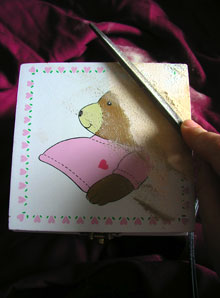 The box is dedecorated and ready for some real meaning! 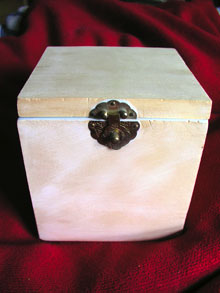 I played around with a variety of techniques for putting the text on the wood, including using a candle flame to heat some metal things as a way to do wood burning, and eventually settled on using some metal stamp letters that I had with suitable application of a hammer. It took me about 1/2 an hour to hammer out the following text (with my young housemates downstairs wondering what the heck I was up to making all that noise!):

We name ourselves after the land we live with. We breathe it in, eat it, drink it, and gain energy from it. We are all one thing — the Earth is us and we are the Earth. 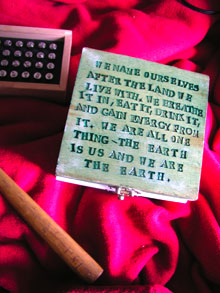 Then I added a medicine wheel design on the side with some wind/water waves going around the box. 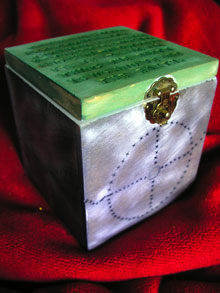 And then I added my first element, a bit of the earth, from my heart. And finally, because this is meant to be a gift, to pass on this very valuable information, I intend to give the finished, and elementally full, box to my husband on our anniversary, on the Summer Solstice, this year. :-)

Comment by Jean Frankly on April 28, 2010 at 1:01am
What a beautiful concept. Thanks for sharing it with us.