Emergency-prepared Mexico of the future

April 15th, 2020
It is 2020 and Mexico City, after decades of neglecting resiliency programs, is about to unveil it's new PESCA (Programa de Emergencia y Supervivencia Citadina Avanzada or "Advanced City Survival and Emergency Program"), in which yours truly took a part in designing.
This program was designed to provide support and facilities in case of city-wide emergencies and natural disasters, with a primary focus on seismological activity, which is the single greatest natural threat we can face in central Mexico and a likely possibility with the increased telluric movements across the world.
As a result, we have picked 64 locations all across Mexico City and it's metropolitan area to be conditioned for urban resilience and survival, with the work scheduled to be completed in a maximum of 3 months. All the locations have been chosen with two goals in mind: minimum of debris and collapse risk after an earthquake, ease of on-the-spot building of camps, population density per area and strategic location for easy and fast access in case of emergency. As a result, the vast majority of locations are city parks, forests and a handful of privately owned areas.
After the work is completed, the overall map will look like so: 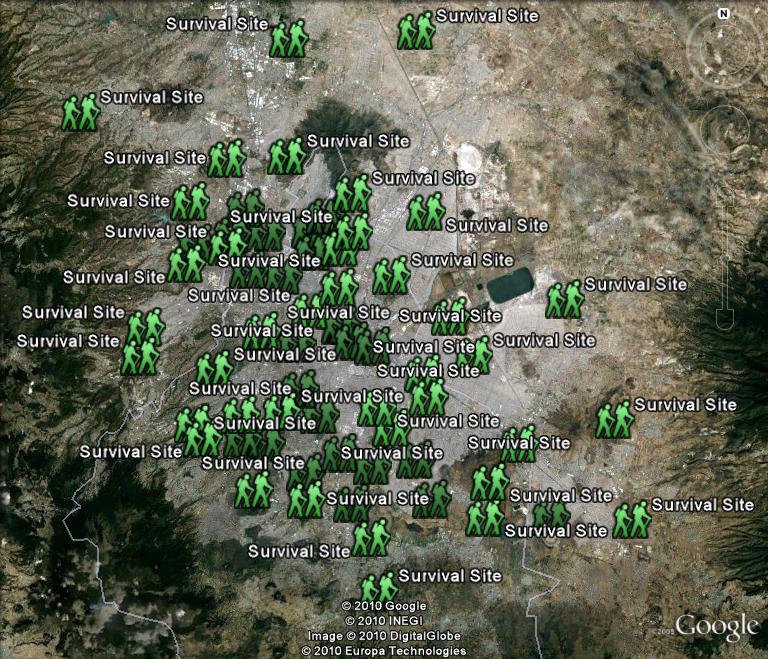 One of the most important and vital locations will be Chiquihuite hill. This is one of the main telecommunication areas in Mexico City, as it houses most of the radio broadcasting towers. In the case of many emergencies, widespread power outages will be expected, and the only means of staying informed for most inhabitants of the city will be radio. It will be vital then, to divert resources into this area to keep them operating and sending vital information to everyone with access to a radio receiver. 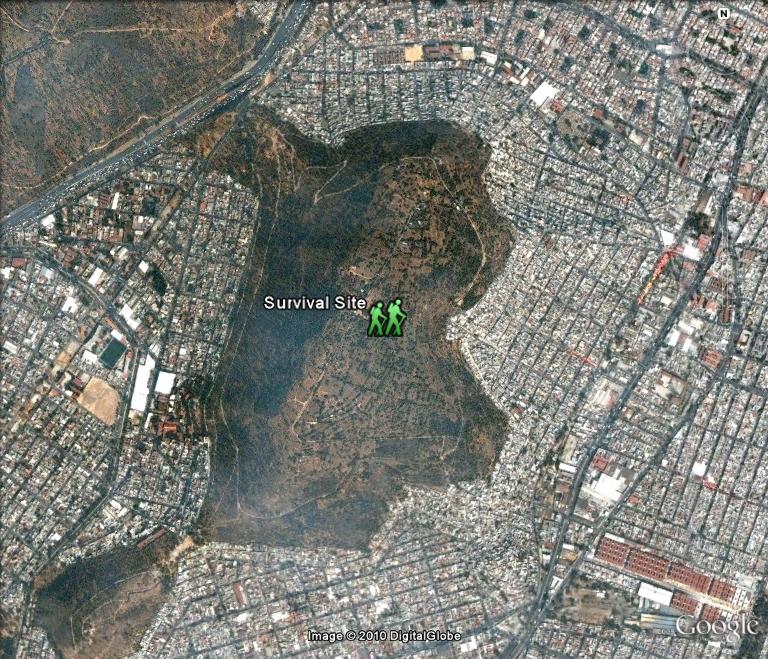 Another vital area will be Chapultepec forest. It's enormous area and infrastructure can ensure the preservation of countless lives in the event of an emergency, and it's centric location can be easily accessed by anyone in the most densely populated section of Mexico City. 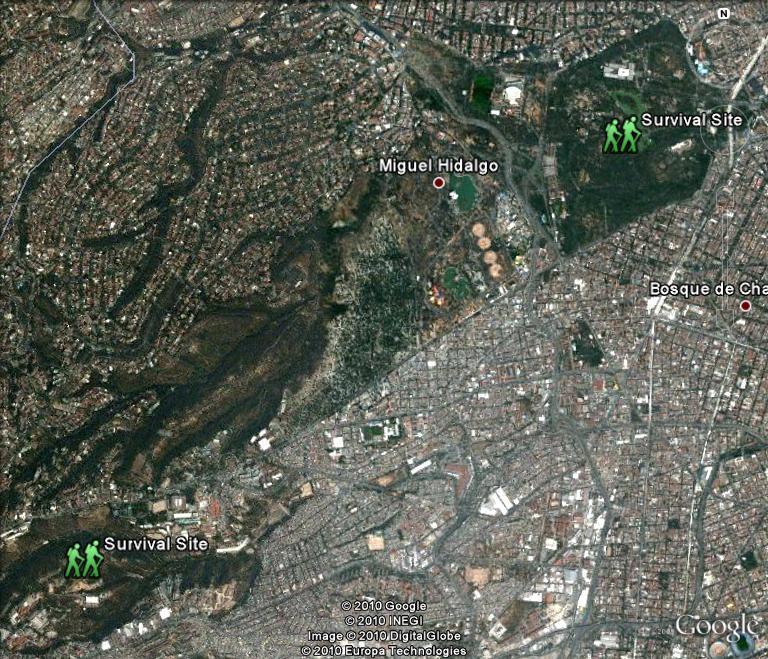 As it can be expected, a large part of the population will be in the downtown area of Mexico City in the event of a daytime catastrophe, so it is hugely important to condition two key areas for emergency response and medical attention: The Zócalo plaza and the Alameda Park, shown respectively below: Also, due to the heavy density of the city and the lack of the open spaces required for an efficient response and survivor attention during a catastrophic event, with the help of city officials and the private industry we have reached an agreement that will bind country clubs and golf courses to allow the use of their properties to tend to survivors and provide for camping spaces for those who may now be homeless, like the Mexican Golf Club below. 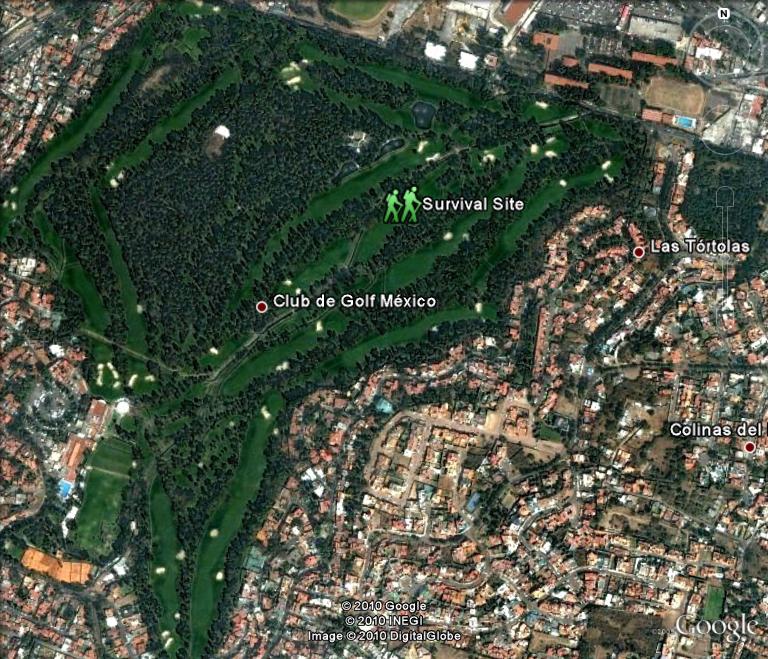 Each and every location will be fitted with renewable energy devices to power lights, medical equipment, water purification services and at least one large screen TV for entertainment and news coverage. Since the structural integrity of any building cannot be guaranteed, each location will have several ready-to-deploy solar balloons to provide energy in the event of a very likely city-wide blackout. 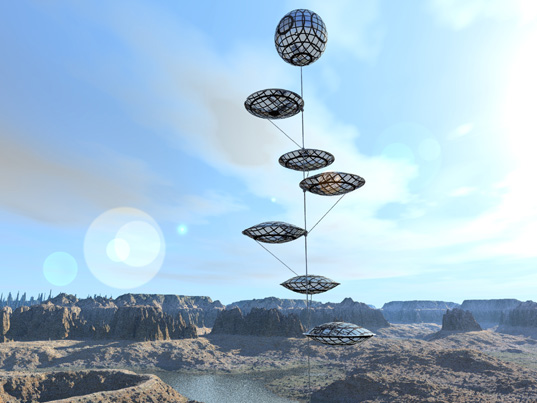 Every location will also be ready to deploy tents and tarps to provide temporary shelter for people left homeless or afraid of going back to their homes due to structural damage, as well as prompt building of medical facilities, for which all locations will be constantly monitored for unexpired medical supplies once a year.

Many of the locations are also near water sources, however, these are heavily polluted and undrinkable. For this reason, they will all also be fitted with treatment plant-grade LifeSaver treatment units, which will also be verified for functionality during a yearly inspection.

These are just the highlights, there are many more details to be learned about our project, like new food resiliency techniques by Patricio Buenrostro, and they will all be available soon at a new website by the Ministry of Civilian Protection.

The poor response and attention from 1985 will never again be repeated. Next time disaster hits, Mexico City will be ready.

P.S. Yes, I know the mission said to use Google Maps, but I find Google Earth to be better and more versatile. :p

Comment by Jean Frankly on May 2, 2010 at 8:58am
Excellent proposal on an earthquake survival and emergency program. Thanks for sharing your insights.