The grand mission of EVOKE 2.0 is to create a beautiful, informative, and meaningful three dimensional storybook of the planet Earth. This 3D "story of us" will be the Human race's calling card as humans begin to reach out into the rest of the universe, and possibly find itself in contact with other intelligent life from other planets, galaxies, and maybe even universes, or at least artificial intelligence.

The 3D book will be structured in virtual memory space, with three dimensions of the planet's existence, as experienced by Humans. One dimension of wh*** story will be three different "chapters" covering the Earth's timeline, with a set of chapters for the past, a set for the present, and a set for the future. The second dimension will be sets of three "chapters" for the three main branches of experience that we social animals have: physical (generally agreed on facts of physics, biology, chemistry, geology, astronomy, etc.), emotional (art of all forms, personal relationships), and intellectual (unproven theories, philosophy, puzzles, and otherwise asked-but-as-yet-unanswered questions, etc.). And the third dimension will be made up of all the individual humans who choose to be Agents helping to write the story book of the Earth. (Of course aliens and non-Human Earthlings are also welcome to contribute, if any happen to want to!). Each agent will, therefore, be another set of chapters, in a way.

As the game progresses, agents will be given the assignments to do one of each combination of chapters, for a total of 9 unique pieces of evidence possible, per Agent, for one in-depth "page" that is either a new creation or a news report each week for 9 weeks (plus a wrap-up week). Agents are encouraged to collaborate with other agents, and anyone else, to make the story more interconnected. Agents are especially encouraged to connect with others from all parts of the world, in some way, and translators will be available from the WBI to increase the accessibility of the game to those who don't speak English. (And mirror games will be played in several other major languages, with some crossover encouraged for those who are multilingual.) Multimedia submissions are also highly encouraged, to add even more dimension to the story, and to make it more fun!

Because telling our story is something that resonates with nearly everyone, this second version of the game will be even more popular, and will attract many, many more people, and many more people will be enthusiastic about participating more deeply, for a much fuller game. The point system will naturally be gone, as the stories will all be equally valuable as pieces of the larger puzzle that is the wh*** of the story of us, though each agents will have the ability to link to other parts of the story that they feel reflects their own stories well, or that they are especially interested in because it's such a different story from theirs. (So maybe a "this is like my own story" and "this is very different from my own story" set of buttons that will automatically add those stories as links on one's own personal page.)

With all the agents' evidence combined, and many of the agents working collaboratively, the story of us will be fully three dimensional, and will very likely become a most precious indigenous object of the entire planet Earth. 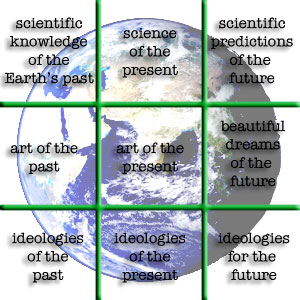 Comment by Turil Cronburg on May 6, 2010 at 5:49pm
It occurs to me that this is essentially the two dimensional Wikipedia with the added dimension of a more diverse range of perspectives of personal/emotional experience. Allowing people who aren't famous in some way to have their say, and encouraging people to share not just factual or theoretical information, but emotional experiences as well. Cool!