KANO, Nigeria -- The nation blessed with Africa's largest oil reserves and some of its most fertile lands has a problem. It cannot feed its 140 million people, and relatively minor reductions in rainfall could set off a regional food catastrophe, experts say.

Nigeria was a major agricultural exporter before oil was discovered off its coast in the 1970s. But as it developed into the world's eighth-largest oil producing country, its big farms and plantations were neglected. Today, about 90 percent of Nigeria's agricultural output comes from inefficient small farms, according to the World Bank, and most farmers have little or no access to fertilizers, irrigation or other modern inputs. Most do not even grow enough food to feed their own families.

Nigeria has become one of the world's biggest importers of food staples, particularly rice and wheat, both of which the country could potentially grow in large enough quantities to be self-sufficient. Even with the imports, about 38 percent of Nigerians younger than 5 suffer from moderate or severe malnutrition, according to UNICEF, while 65 percent of the population -- roughly 91 million people -- are what humanitarian organizations call "food insecure." They are at risk of waking up one morning to find that they have nothing to eat.

Nigeria is "high-stakes," said William A. Masters, associate head of Purdue University's Department of Agricultural Economics and a specialist in agriculture in Africa. "Malawi's successes or Zimbabwe's failures are small compared to what happens in Nigeria," he said.

The people who have suffered most from Nigeria's unreliable agricultural output are its impoverished neighbors. In 2005, when Nigeria had a bad harvest, traders imported grain from Niger, which borders Nigeria to the north. The increased demand caused food prices to spike beyond what locals in Niger could afford. Aid organizations sent in food aid, but much of it was also bought up by traders and diverted to markets in Nigeria. Nutritional surveys suggest that untold numbers of children died.

Aid organizations say that they are now better prepared for food shortages in Niger and other countries around Nigeria, but that Nigeria itself remains problematic.

"Its economy is so big and complex, we can't really get a handle on it," one senior aid official in the region said on the condition of anonymity because he was not authorized to speak to the media. "The idea of a major drought or other disaster in Nigeria is almost too frightening for anyone to contemplate."

In theory, Nigeria could cope with a food emergency. The government is supposed to have the capacity to hold 300,000 metric tons of grain in reserve. But in practice, many of the silos for these grains have not yet been built, and those that have stand empty or are half-full.

"At best, the government's capacity is 300,000 metric tons and that capacity is only being half-utilized," said Guido Firetti, a silo contractor who recently took over the job of completing a 25,000-ton silo that has been under construction for more than 15 years.

For many in Nigeria, including some government officials, the global food crisis last year was a wake-up call. Prices of imported food soared, and the country panicked. Fearing food riots, the government announced it would spend $600 million to buy rice regardless of the price. The plan was quickly shelved when it became clear that getting the imported food to the people who needed it would take almost as long as growing the food locally.

The government then shifted gears. The money for importing food was reassigned to food self-sufficiency projects and, according to Nigeria's 2009 budget, the government's spending on agriculture is set to increase. The spike in world food prices, the worldwide recession and the slump in oil prices have spurred the government on, said Salisu Ingaw, the head of the National Food Reserve Agency. "Now we have to become more food self-sufficient," Ingaw said.

Corruption is the usual explanation for why this ostensibly "rich" nation remains so underdeveloped. "But corruption is just the tip of the iceberg," said Masters, the Purdue specialist.

Even the most corrupt Nigerian governments invested in some infrastructure projects because they had so much oil wealth, Masters suggested. The problem is that so little of what they invested in ended up working, he said.

One widely held misconception that Nigerian governments fell for, Masters said, is that big farm ventures were inherently more productive than small ones. "Unless they are to be a link in a larger industrial process, the chances are high they will fail," he said "In most cases, large industrial farms don't have the necessary flexibility one finds in smaller family-style farms."

Nigerian development economist Shuaibu Idris said governments have traditionally seen small-scale farmers as backward, "but there is absolutely nothing wrong with a peasant one-man proprietor farm as long as the farmer can learn to adapt to new realities." Small-scale farmers may need to form cooperatives to share the cost of farm machinery and to buy inputs at bulk prices, he said.

That is also the conclusion recently embraced by the World Bank. In January, it approved a new $150 million Commercial Agriculture Development Project in Nigeria designed to support small- and medium-scale farmers.

The World Bank's new project, which is in the form of a loan to the government, will improve rural roads for farmers to reduce high transport costs and provide them with better storage facilities.

The good news is that Nigeria has boundless agricultural potential. Of the 3.14 million irrigable hectares of land in the country, the World Bank says only 7 percent is currently being utilized. And though large tracts of farmland have been lost to desertification, more than half the country's estimated 98 million hectares of arable land currently lie fallow.

"The opportunities for our farmers are enormous if only they were to get the right institutional support," said Sabo Nanono, the head of Kano state's commercial farmers association. "We could feed the entire West African region; we could produce enough rice in just two or three [of Nigeria's 36] states to feed the nation and even to export."

Somehow, the supply chain that feeds 140 million people keeps cranking along. The country has not seen a major famine for nearly four decades, since the Biafran civil war. But Nanono warned that it wouldn't take much to send this vulnerable country -- and region -- over the edge.

"The reality is that if the rains are bad throughout the region or the price of inputs became unaffordable, there could be massive food shortages, and neither the government nor any other institution stands ready to help," he said. "Then only God could save us." 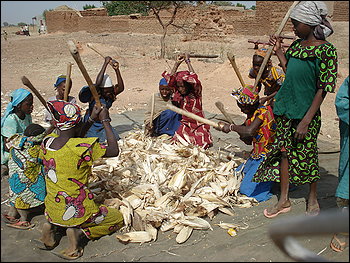 Comment by Mita Williams on March 15, 2010 at 1:38pm
Thanks for this. I'm intrigued by efforts from Oxfam to fight corruption overseas by also holding Western oil companies responsible through financial transparency.