I have read many articles of the UN gender equality newsfeed page. And I've finally decided on the article "American girls raise awareness and money to fight child marriage in four countries". Thousands of American girls between the ages of 13 and 18 years fighting against the marriage of children. These girls help the UN Foundation's Girl Up campaign in four countries, Ethiopia, Liberia, Malawi, and Guatemala.
Girl Up campaign

I think it's very important that children have a childhood. Because you will grow up soon enough.

After further investigations, I have found a more foundation. The "Konrad-Adenauer-Stiftung". This foundation is against the marriage of children in Senegal. For this purpose, the Foundation has published a comic "Afrique Citoyenne - Mariages Precoces". This comic is trying to persuade people, to let the girl go to school and make the conclusion. The foundation gives away comics at schools, youth- and women's- and human right organization. Girls and women in Senegal, as in other parts of Africa, are the main victims of underdevelopment. 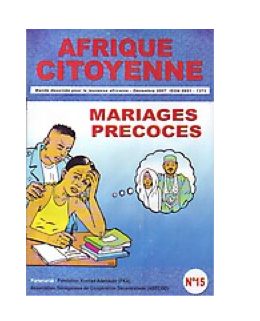 Such a comic should be in Africa and especially in the countries in which the marriage of children is particularly pronounced to be distributed. It shows all the problems with which the girls must contend with an early marriage.
I think it is especially good a serious issue to be connected with a playful aspect. Both children and adults can learn from this. Because children are our future.

I really like the conclusion of this article: Because children are our future. :)