After reading through Exhibit A, one thing struck me—a lot of those secrets had something in common and mostly boil down to one key idea. Simplicity.
When you're developing something, whether it be for school, for sale on the wider market, or for empowering others, simplicity is one key element that I think that you must keep in mind. Why?
Well, let's take a look at a familiar example from the modern world. I bet you're reading this on a computer. (If you're reading this on a phone, good for you! That's an even better example.) Back waaaay waaaaay before I was born, computers took up rooms. Buildings. You had to program them, physically, with giant jumper boards that you actually hauled and slid into the computer. There were only a few around. Why? Only a select few could use them. Now, jump forward ten to twenty years. Now, the personal computer is starting to come of age. More people—hundreds of thousands more—have their own computer. The Atari, Commodore 64, Apple II, and so on. Why? They're cheaper and simpler. They're more intuitive, easier to use, easier to understand. The trend just continues once the GUI is introduced, once Apple creates their strict user interface usability rules, and so on.
You can see the same pattern with cell phones. Look at an older phone, say from 2003, compared to a modern phone. Besides their size, you'll notice one thing—they're simpler. Companies were forced to innovate and simplify. The end result? Mobile phone adoption has jumped, especially in the smartphone market, where you have the iPhone. Why is the iPhone so popular? It's simpler and intuitive.
So, what am I getting at? If we're going to try and change the world, we need to not only think in terms of innovation and development, but in terms of simplification. Creating something life changing is awesome, but creating something simple, life changing, easy to manufacture, and even easier to incorporate into your life is something that is truly amazing. And that's what we're aiming for—something truly amazing here with EVOKE.

“As you simplify your life, the laws of the universe will be simpler; solitude will not be solitude, poverty will not be poverty, nor weakness weakness.” 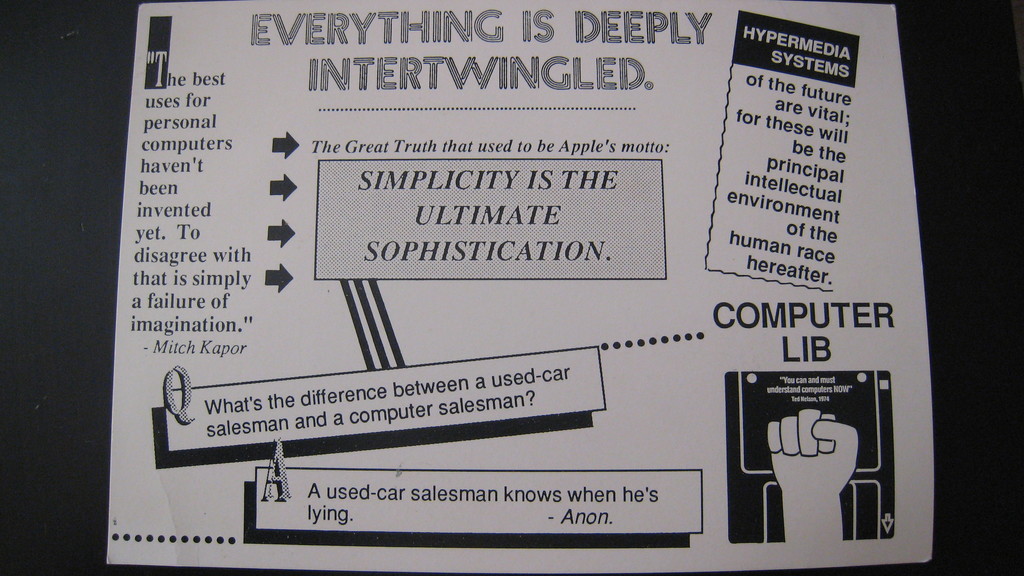 I couldn't resist showing you this promotional postcard because it touches on simplicity, Apple, and computers. The book that the postcard is promoting is called Computer Lib / Dream Machines.

Comment by Nathaniel Fruchter on February 9, 2010 at 11:37pm
That's an awesome card, and quite pertinent. Thanks!

I totally agree with you when you say “simplicity is everything.”

It is also very true that “we need to not only think in terms of innovation and development, but in terms of simplification.” I believe that if we are to create solutions to the world’s most pressing problems – faced by humans – we need to first understand the characteristics of these humans.

In my observations, humans enjoy simple things; most especially when it gets to technology. At the university where I study, we go through a lot of hustle making cues just to register for examinations at the end of the semester. We are quite a big number by the way… around 30,000 students. Good enough the problem was identified by the university officials and they devised a solution – they created a web site where we could register for the examinations online instead of having to make cues. Unfortunately, this solution did not yield results as planned; students actually resisted it because the web site was so complex and not user-friendly at all. The wh*** procedure of online registration is more hectic than the offline or manual one.

I think this is a clear example of the relevancy of simplicity in innovation and development. If we ignore “simplicity” as we try to create solutions, we are most likely to have our target audience develop resistance to our solutions.

Comment by Carlo Delantar on March 19, 2010 at 4:34am
You have the power to wield the world with your mindset! keep it up and everyone will follow!