Taipei, ROC: Taiwan today became the first jurisdiction in the world to adopt energy as the basic commodity underwriting it's currency.
The New Taiwan Dollar will remain in circulation indefinitely, but from 1 April 2020, electrical energy must be paid for using the new currency, forcing banks to convert all existing customer accounts into multi-currency accounts. Under the scheme, customers can use their debit cards in the normal way or withdraw the new currrency from ATMs nationwide that have been replaced as part of the government's drive towards becoming the world's first energy-based economy.

Withdrawals will initally result in the customers going overdrawn on their new accounts, as no exchange rate has been set. Instead, people will need to buy Kilowatt Hours from the organisations that have been issued the currency, said Wee Pei-yoo, a spokesman for the newly-created Taiwan Power Bank. He went on to say that the intention is to create a market for the new notes, offered in values of 100KWH, 500KWH and 1MWH, which will encourage people to use them for other transactions.

"We hope very much that people will recognise the value of a currency that reflects the basic wealth of the nation," said Pei-yoo, before adding "energy is the new gold-standard, and one kilowatt hour will always be one kilowatt hour. We've issued the new currency to leading retailers, online stores, and banks for them to sell at whatever price they can get."

The move follows the financial turmoils on global markets over the last two years after the UN declared that the world had reached 'peak oil,' the collapse of several leading banks in China and Russia, and defaults on sovereign debt by major countries including the UK.

Analysts have responded positively to the move, noting that Taiwan relies mostly on marine energy and has invested heavily in electrically powered vehicles. No new fuel-burning motor vehicles have been permitted on Taiwan's roads for three years, and tough legislation has been introduced making it more difficult to keep existing cars on the roads. With the entire economy shifting to electrical power, a free-floating currency backed by the country's energy resources is seen as a hedge against future instability. "You can't go wrong," said Gabriel Martin, chief currencies strategist at the World Bank's Centre for Financial Security, "nobody's going to speculate against something as real and fundamental as this."

Meanwhile, on the streets, the general public also welcomed the new currency. After years of price hikes and blackouts, energy security is never far from people's minds. "I'd like to receive my salary in KWH," said Pei Mee-nao, a factory worker. "Everything I buy depends on the price of energy, so it would be great if my salary would always buy the same amount of it."

Business owners also expressed interest in the same idea. "It would simplify everything," said Paul Holze, international communications manager for mobile phone giant HTC. "If energy and labour are priced in the same way then all the other variables become manageable. We could forecast our costs more accurately, insulate against the kind of mess that resulted from the last crisis, and of course it would encourage us to invest in our energy production facilities, which would push the cost of energy down and benefit everyone in these troubled times."

So how long until that happens? According to the Taiwan government, civil service and military salaries could be paid in KWH as soon as next year, with the wh*** economy making the shift within five years. Maybe the question to ask is, how long until other governments start following suit? 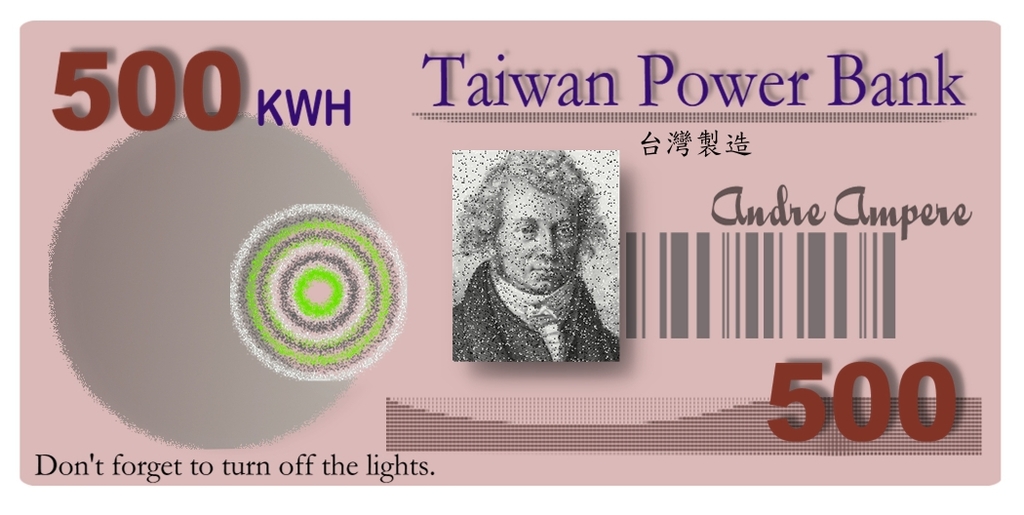 Comment by Daemus on May 12, 2010 at 4:28pm
Using energy is an interesting concept in the introduction of a new currency standard, but how would you be able to contain 1MWH of energy without wasting it? A bank would have to hold massive power plants in order to keep up with demand.

Being an electrical engineer (undergrad), it would be difficult to store the energy as the most useful version of electrical energy is AC, but batteries operate at DC. Just a thought.

Bank notes are just promises to pay. One pound sterling was originally a pound weight of sterling silver, deposited in a safe place which then issued a receipt - a note promising to pay one pound of silver on demand. The silver was then loaned out, because there was a fairly steady 'demand' from people drawing the silver they were entitled to and the rest of it could be safely used to generate economic activity. Meanwhile, the people holding the notes started to use them as currency instead of the actual silver.

Dollars originated as silver coins minted in central Europe. They became the standard medium of exchange for hundreds of years, and were eventually supplanted by pieces of paper which performed the same function as the coins, except that they were promises to pay - backed up by the wealth of the issuer.

A note is a promise secured against the assets of the issuer. In this case, the assets are the capacity to produce electricity. Demand for electricity is fairly steady, so you can issue promissory notes without fear of 'a run on the bank' like you could get with silver.

Other than that, I don't really know enough to argue. Suffice to say that economics and reality are a long way apart. Someone once said that the main function of astrology is to make economists look respectable.

Comment by Chris Ke Sihai on May 12, 2010 at 6:16pm
Sorry, in other words, you issue more notes than you actually make electricity. You don't store power, you maintain a debt or obligation to supply it on demand.