In 2069, I will have finished my first century of life on this planet, and I'll be just finishing up spending my energy learning how to collaborate with the Earth's own abundant resources to create new and wonderful things for all of humanity, and I will be very, very likely to want to share that understanding with not just the humans, but with all other intelligent Earthlings and intelligent life from other worlds, as well, many of whom we humans have learned to effectively communicate with. The new generations that have followed my own have become fully fluent in procreating and evolving through not just genes, art, and memes, but also of xemes, speaking to alien forms of life, and bringing human society into an era of xenophilia - love of others, and have created a very powerful sense of humankind as just one indigenous tribe in a universe of many, many other wonderful species.

I will also, as always, continue to spread the general knowledge of the power of unconditional love as a way to heal all wounds, and create a space for the most creative and positive elements of the human spirit to flourish. 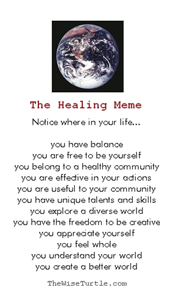 (By the way, if anyone wants some of these Healing Meme cards to hand out to others, I've got a bunch, and I'd be happy to send some to you in the mail, and they will hopefully get to you well before 2069! :-)

I am very happy now having the language to consider myself a Xenophile!

The essence you speak of here, that the greatest wisdom to share is truly one of Unity and Love, brings with it a wonderful feeling of warmth and liveliness. Thank you for sharing.

And yes, xemes, and xenophilia, is something that excites me. Being able to communicate clearly with other species and even other forms of life entirely (AI, maybe), is really a powerful thing and we're only at the very beginning of learning how to speak truly "other" languages.