My personal water alliance will be with Gerald from my institute. We will save water by forcing people to take the coffee water also from a day before. Till now the process is as follow:
In the morning the water is dumped and replaced with new water. But from today on a sign will show people that this is not the way to do it. See picture:… 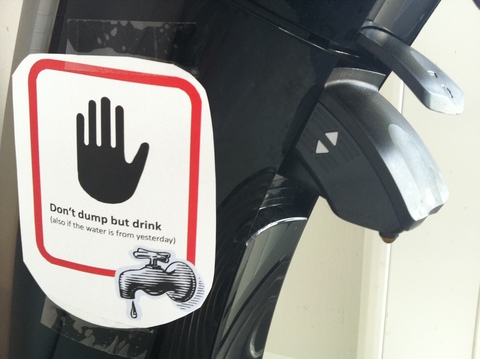 The best secret that i found that would help with innovation is to share your ideas with others and use other ides to build on and create better ones. This is good because it shows that sharing and working with others can really be beneficial to society in general.

In 9 years from now I'll be eating dinner with my family and we will be having one of our favorite pasta dishes, linguine in clam sauce. It will taste good because all the ingredients will have been able to be purchased because we took the steps now to solve a food shortage problem. It will taste great because we are great cooks and every thing we make tastes excellent. We got the ingredients from the store and also purchased some items to donate as well as part of our regular routine for… Continue

A local food shortage that has been going on for years is the food shortage for bay area homeless residents. Thousands of people goto sleep hungry regularly with no viable solution in place. Many people in the bay area have set up food kitchens and other food delivery services to help the homeless population. These grass roots organizations are what is going to solve these crisis in the future. People taking the initiative without having to be instructed or giving the means to go out and do it.

In the year 2020, I'll probably be having dinner with my wonderful wife and perhaps my youngster kid, and we'll be eating similarly to what we eat today. That is, unless we move to France where they serve the right size portions. Hopefully we'll be able to make better informed decisions about what we eat due to upgraded technology, which helps us balance our daily meals with a strict nutritional diet that keeps us all fit. I don't think we'll be eating pill sized meals or anything like that,… Continue

It is March 10,2020. I am 32, and eating dinner with my family. We are having fresh vegetables that we grew in our garden in the front yard. My children have invited their friends over for dinner since they were there to help plant and grow the vegetables too. We eat salad with organic lettuce from a local grower in Sonoma County. We have grown cherry tomatoes in our garden and sliced them up to put in the salad. The tomatoes are red and juicy and taste delicious. My children's friends never… Continue

I know a lot of people around where I live with plenty of space for gardens. There is also a lot of room around a trail that goes for miles through Contra Costa County, called the Iron Horse Trail. I could plant some fruit trees, such as an orange tree. When I was younger we had one in our backyard and it was fun for me to eat the fruit that I picked off a tree that I planted. I also would like to find a way to educate children and their parents on ways in which they can grow their own food,… Continue

When we hear about poverty, hunger, and food insecurity, we might not necessarily think about it being a problem in the United States. However, there are many people who go hungry right here in this country. In 2008, a survey found that 14.6 percent of households in the U.S. had low food security. Many of the states that are considered below food security are in the southern part of the country, including Georgia, Mississippi, Texas, and Oklahoma.
In Contra Costa County, which is where I… Continue

In 10 years from now I hope to be a cop in the general area where I live and hopefully have my own house. Maybe even have a family, who knows, lol. If Japan was going through a food shortage I would definitely do what I could to help out. I would give money to the Red Cross or whatever other organizations were helping out with the relief effort. I would also spread the word and try to get others to help donate. People will tend to donate more in my opinion if they see their own family and… Continue

IMAGINE: The year is 2020 and I’ve just plugged my car in for the evening. Total Solar, the leading edge solar power for residential users, is competing toe-to-toe with the big electrical utilities. Everyone is going solar. I’m running my household 100% solar now. I have a backup generator if I need it, but I never turn it on. Today is a very special day. It’s national Celebrate Solar Day. My hot water, my stove, and my heater are all powered by the power generated by my Total Solar system. My… Continue

ACT: We all know that little things make a difference. Two things I intend to change to save energy are first, to switch to a non-battery operated toothbrush. The second thing is to minimize what laundry I put into the dryer and use a clothesline instead.

LEARN: Growth in the Solar Power energy sector in the United States grew by 17% in 2007, and is projected to compose 10% of our country’s energy needs in 2025. The keys to future success of the industry are they need to make components easy to plug together and use. The electric utilities need to make a commitment to bring solar energy into the array of sources currently feeding the power grids. Tax incentives should be extended for further research and development

How to be in harmony with the environment

Being a harmony with the environment means not to pollute the earth and not to release CO2. Why? Because pollution will affect our eco-system.
Pollutions are become serious because we make a lot of waste. For example, now, many factories on earth release harmful gas to the environment or drain dirty water into rivers.
Because of that, many species become fragil which eudanger the world we live in. How could we slove that? First, not to use so much energy to break the natural. Second,… Continue

When it’s 2111, people all over the world may lack energy resources such as fossil fuel, natural gas and so on. Nevertheless, people will still continue to live without these resources. People will not able to drive, or operate some electronic devices. Society will definitely become a mess! What people can do to solve the problem is to try to find some alternative methods to produce energy. We assume… Continue

The biggest challenge to food security in my local community Alameda County is underway going through changes. San Francisco's number of residents on food stamps has grown by 55 percent over the past year and a half. Now more than 41,000 San Franciscans use food stamps. (SF Gate, 2010). This is statistics of San Francisco, our local neighbor of Alameda/Oakland. There are innovative solution programs that are out there but it lacks community outreach. Many people are not aware or concern of the… Continue

If we do not have oil or gas, how can we drive cars? Then we must walk everywhere. It is really tiring to do this. Someone will say, “Hey, you can ride a bike!” But if so, we can not move as fast as when we have cars.
It is 2011 now; energy resources are less than before. If we do not care about this, one day in the future the environment would be terrible.
Then lots of people started to think of creating something else to be another new energy source for us. For example, solar… Continue

What we should use everyday must be energy. In these days, natural energy has been consumed very much. Since a British invented the first train in 19 century, energy has been used in a huge quantities.
Can you imagine a future without energy? We couldn’t drive cars, take planes, and even take a bath. Most of the countries don’t have enough energy, so they have to get it from other countries. And only few countries have energy. Such as… Continue

How to live in harmony with the enviroment

After one hundred years, maybe there will be no energy. So we don’t have gas to start a car. We will create a machine, that use scream to start it. When the machine need to start, people can scream at it, and you can use that machine. That kind of car is good, because you don’t need to find some other energy, just scream or yell at it, the car can move!

Maybe there’s no any energy in the world after 100 years. I think we have to figure out the serious problem, and manpower may be an excellent choice. Japanese have done a special invention to make electricity by manpower, and that’s telling us producing energy by ourselves is not just a fantasy!
Some floors of Japanese railway stations are a kind of special floors. People who step on them can make electricity. When you step on the floors, the device under the floors is shaking. The device… Continue