I would like to make some suggestions to the next Evoke Episode. Fistly, the application has to become more user-friendly. This means that some improvements on the website could be made regarding the layout, the buttons and user profiles. Further applications could be inserted, like implementing a live-chat amongst the members, or live-chats with alchemy or other Evoke members. There were some internet links not working, and all websites linked should be proofed regarding their actuality.… 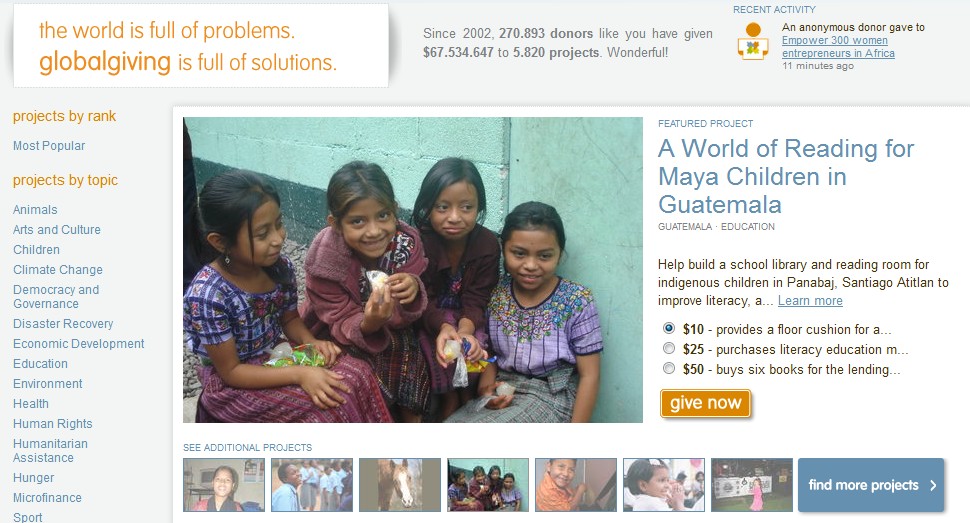 I donated 10 dollars for the project "GlobalGiving". Furthermore I telled all my friends to donate for this project and pass on the informations about this project to other people they…

Scene one.
Sun rises over a valley full of houses.

Close up on two elderly people sitting on a park bench on the top of a hill next to it.
Their faces carved from live. Wisdom and experience in them

Coming up the hill in a convertible are two young men (25-30 years), suited up, ready to go to work.
They bring food for the elderly, they are probably relatives.

The elderly mutter thanks and begin to talk about back when...

LEARN:
How are elderly…

Where will the journey go?

Of course, there's still need for action in the places we've investigated in the last ten weeks, and - of course - there are thousands more to be solved. What is important now?

For me, I think, it's extremely important to get a solution and an awareness for what happens to elderly people in the communities all over the world. Many of them won't be able to feed themselves because of economical issues, though medicine and technologies allow us to live…

the future of evoke

I think evoke should also tackle political topics, like manipulating, censored media and biased coverage, which are important current issues.

What i don't like are the private options of your submissions. On Missions you can only select "All" "Friends" "Private", but you can't for example make it visible for all logged in evoke agents and invisible for public. This is even more of an issue for Quests, because everyone can read your submissions by searching "your name + evoke" on…

§1 Basics and Definitions
§1.1 Definition of EVOKE:
EVOKE is a formerly secret community of social innovators all over the world brining together their skills and abilities to change the course of the world. This may happen in great events or small local actions.

§1.2 The Members of EVOKE
Anybody who is interested in changing the world and being part of massive change can apply for membership. Alchemy will check the apply and get you informed

The EVOKE network is a union of many agents around the world who are interested in changing the world. They feel and consider the different problems of the world and it's inhabitants and want to change it.
Through different missions in ten weeks the agents are confronted with several challenges of the world, especially in season 1 problems of the African continent. The agents are asked to find solutions in an efficient and humane way and to cover methods which save…

I would change a lot in the game.
First, the “game” (one has to admit that this is not really a “game”…) should be more interactive. Therefore, I also agree with Dennis Hartmann concerning the point, that is lastet a very long time until the blog post has approved, which is very bad concerning the interaction and communication. I also agree with Claudia Siatrowski concerning the one-week-rotation of the missions. One week is very short to understand a real big problems, especially for…

^^
Do you have the other ideas to thrift something you use everyday? Let's do it!

There are two groups of people i would call to help. First there are medicine experts who know how dangerous the epidemic really is. The other important group consists public relation experts and journalists who can inform the population in the right way to prevent a panic.
If the epidemic is really dangerous, it needs a third group. Politicans who could organize help efficiently.

Meanwhile, it's all about the 3rd Season =)

This season takes place in Africa, the 2nd in Brazil and the 3rd should play, in my opinion, all over the world! I think the problems of a country are more important than the country itself.

There should be a focus is…

The first thing I want to say is that I think that the Evoke-project is a great idea. However, I would be happy if more would be done for public relations of the network. I think the Evoke is still relatively unknown. I've also just learned about it because it was offered at my university as a "social innovation"-seminar. I am convinced that many more people involved, if they would be made aware of specific problems and possible solutions.

Now I would like to make a proposal for a…

When I am thinking about the future of the EVOKE network and what urgent challenges could be tackled next the following problems/spheres could be in the centre of attention:

> Special attention should be given to the future and the education of children in different parts of the world. Every child should get the…

I used PayPal this week for the first time. Although I have heard of fraud in connection with paypal. But I still have a feeling of security. I'm still going to stay attentive. Hopefully it works.

vegetables in the garden

Last week i've visited my parents and have helped them to work in the garden. Important to this mission was to plant some vegetables. Salad, tomatoes, cuc**bers and different spices. It produce only small costs to cultivate vegetables. But more important is that the food is very healthy.

I think the social problems which were treated in the last 10 weeks are still biggest Challenges. Additional to this problems could be poverty and child labour a topic for Evoke. That are the biggest problems in the world.
New EVOKE communities should grow around the world. I think there is no special place for the next community. It should around grow around the world constantly. Then can all communities work together and the social problems will more efficient solved.
The next…

I think Evoke should become more famous. It appears to me, that evoke is mainly known by students. In order to have a bigger pool of good ideas, evoke should be known by broad levels of the population. I think there would be many internet pages that are willing to advertise for evoke for free.

Some global main concerns were not discussed in the first evoke session, e.g. the massive trash problem or the dying rainforests.

In my opinion, the wh*** evoke "playing" process should…