My Evokation for 2010 Helping empower Battered Women, Children and Men stop the cycle of abuse by Sunny du Pree

I touch many lives in real life, and hope to exponentially increase my ability to assist and inspire through online outreach and face to face counciling. I know that I can be an effective counsellor/trainer to help those who are abused, and to help stop the cycle of violence in Amarillo and the surrounding areas. I have an area of influence that is large. I have…

Rotors thump as the helicopter hits the ground. The door bursts open and a squad of uniformed men and women bound forth. A tall man in a Beret jumps out last. It is Alchemy and he is calling on his Urgent Evoke agents once again to assist him. Mita runs up with a cell phone. "Alchemy, I have organized the agents and they will be ready on Go when you give the orders"! Alchemy grabs the phone and barks into it as a dust storm kicks up. "Sunny you have your agents in Texas mobilized… Continue

I made a pictogram based on some examples that I found online. Unfortunately I do not have the link for it and I am hoping to find it so you can see more examples of pictography or pictograms. I have based my work of art on the following poem taken from Hiawatha.
These are the major pictograms that were used
I utilized a rabbit fur because I couldnt afford bison!!! The plains Indians would write stories on wood, trees, rocks and skins. I would like to… Continue

Imagine 7 Urban Resilance April 15 2020 The dark side- Had to add again I deleted before!

Well the idiots went and did it. NO ONE would come together. No one saw
that we all matter and that each life touches the other. One argument
escalated to another. People could not overcome their egos and see that
there is a beautiful world out there. That an ocean of people could come
together in one massive wave and put aside differences. They flat out
forgot the word Love. So we don't really know how or who, some say they
heard a person with his… Continue

I went out to Mariposa Eco village. They broke ground last year sometime and are almost finished with the Visitors center. I blew past that and was in the middle of no where and where the heck and I going and I found the signpost for Mariposa Rd in juxtapostion with Rabbit run. I saw acres of green shelves and berms in a hilly area. I saw supplies for one area to build and came across a home that is near the end of being done. It was very cute had its own cistern and solar… Continue

Many on Wall Street say they'd never seen anything like it. One money
manager says he literally fell off his chair. Another says he thought a
nuclear bomb had gone off.

Evoke Manifesto
The Agents and all peoples connected to Evoke hold that all these truths are self evident. Each human being has the right to life, liberty and the pursuit of happiness. All Evoke Agents and connected parties hold to the Golden Rule Do Unto Others as You Would Have Them Do Unto You. That people all over the world have a right to food, water and physical security.

Imagine 9 Who would you call to help in a Pandemic

Hello Channel News 9 Sunnydupree here and I am calling to report a terrible pandemic outbreak of flu that we are just now seeing people in Amarillo come down sick with it. We need to make a call to action to all members of the community medical and non medical alike to come together and triage and organize this health crisis. I will be mobilizing members of my Art is Earth Darksite and the Delta Team to help in this crisis. Be sure and put a crawl on the local…

Learn 10 The future for Evoke Network by Sunny du Pree

I can not believe it I made it to 100! I do not know if I should celebrate or not. Gettin old is not for the faint of heart. I had a bout with the 'ritis boys and Arthur did a job on me..hee hee...cough. I still have my own choppers cause they said back in the day if you are not true to your teeth they will be false to you. Course now they have all those new thingamagummys that keep your teeth from rotten out of your head. All the young folks walk around with smiles so bright… Continue

In one of the wealthiest, most agriculturally rich states in the nation lies an ugly truth: Over 3.1 million people in Texas are “food insecure,” meaning they don’t always know where they will get the groceries or money for their next meal. This number includes approximately 874,000 Texans who may suffer from outright hunger.1 It is estimated that almost one-quarter of Texas children—over 1.4 million—live in food insecure households. 2 Texas has the second-highest rate of food… Continue

Natural Systems Developers LLC (NSD) is a development company dedicated to designing and building modern villages that are ecologically and economically sustainable for a population of
2000-5000 people. We call these EcoVillages.

The first will be Mariposa, outside Amarillo, Texas. (See - "Sustainability" and "What is an EcoVillage" in these web…

If there was a tornado or other crisis in the town i am living I would utilize text messageing, actual phone calls, facebook, twitter and actually going door to door to alert and help people. the ushahadi project is excellent but we need to have one for each town in the US! I would also use the TV and any local chatrooms to check up on people and what they have heard. I would be calling everyone I know.
short but sweet.
grace and peace sunnydupree 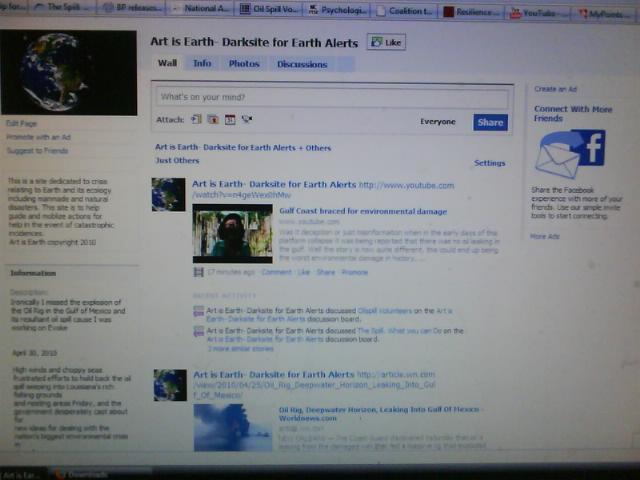 Thank you to Koshy for… Continue 
High winds and choppy seas frustrated efforts to hold back the oil spill seeping into Louisiana's rich fishing grounds
and nesting areas Friday, and the government desperately cast about for
new ideas for dealing with the nation's biggest environmental…

Learn 7 Ushahidi Project and what it is and Disasters most likely to happen in my area.

The Ushahidi project is a platform which allows users to report important information by utilizing their smartphones. They can use video, pictures or text message to report the problems that are occuring in realtime. Ushahidi uses a filter so that they can plow through all the messages and find out what is really going on instead of having to go through the massive amounts of data that is transmitted on Ushahidi.
Continue

Episode 9 code phrase "The crowd does not lie"

I think that phrase "the crowd does not lie" can be utilized in the technologies that we have on hand. If one were to use their twitter account, facebook or other networking sites to report immediate problems the urgency would be evident to others as people report personally on what is happening. You can have one person saying something and it might be wrong but if a mass of people in separate areas are saying the same thing then you can pretty well bet it is true.