Denial during a Pandemic

The most surprising fact for me was that people rather deny pandemic than to panic. In Germany there is currently an illness called EHEC. People get diarrhoea and antibiotic does not help. This can cause heavy damages of the kidney and even lead to death. A few people already died and a lot of people got ill these days. I hardly can imagine that people deny these facts.

The World Wide Web is able to make life easier. In case of a pandemic flu, it can be used as a communication instrument to share essential information with other affected people. My challenge is to implement an online platform that supports desperate people suffering from the pandemic flu. For that reason, I would ask five professionals to take part in a centralized online platform for different needs. People who do not want to leave their home anymore can log into the… Continue

May 20th, 2089. I have reached the age of 100 years and now I am one of the eldest of my village. The time has changed a lot life becomes faster and faster and people do everything to be a part of it. The technical revolution accelerates this process, because it makes it so easy to be available for everyone – 24 hours per day. Today everything and everyone is connected; without a good working internet you do not have a chance to survive.

Nevertheless it is essentially important to… Continue

I think the case study of the women healers who formed groups to practice medicine in OAXACA is an important lesson. This idea is similar to evoke. People share knowledge and talk about problems. I think sharing knowledge very important. Especially when you share knowledge concerning medicine. Sometimes it is easy to help a person who is sick but without having the knowledge how to help or which medicine to give, it can get serious. Antibiotics can for example save a lot of lives. But when… Continue

The climate change – one of the major problem in the 21st century – is changing the world. This ongoing process requires a new way of thinking and acting with environmental issues. Consequently, people all around the world need to get the awareness of how they can contribute to protect the environment. In order to reduce our carbon footprint it is important to act globally. Nevertheless, every single person is responsible for the world we’re living in. But do people actually know something… Continue

The map of Nuremberg 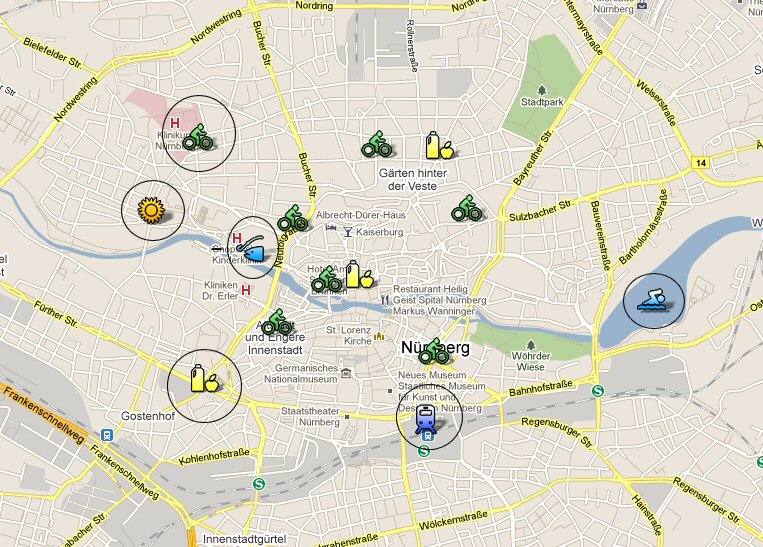 The bicyle means that here you can borrow bikes for only one € for an hour.

The sun is a symbol for a huge solar parck in Nurmeberg.

The city focuses on clean water so that a lot of fishes live in our river. The swimming person is a symbol that you can swim there because the water is not polluted.

The fish symbol shows that there are… Continue

Terrorism and rain in Germany

Ushahidi is a great platform in my opinion. Hopefully it will help a lot of people in the future.

The most urgent fear in Germany is terrorism at the moment. After the dead of Bin Laden the terrorist are angry and there was a warning for Germany.

To collect information for the Ushahidi network I would track the data of potential terrorists who are under suspicion.

In case of an attack information can be shared immediately. People can be warned not to go to… Continue

I picked the project: Income Generation for 5,000 Poor Ethiopian Women. These women will be able to earn their own money. Like that they do not depend on their husbands.

These women will have a nice life. They will be educated well and their children will be able to visit a school and have food. They will be an example for all the other women.

Some of them will tell other women about skills and basic enterprise-management. They teach women how to be successful in working… Continue

I have not the time to meet my friends to ask them for a donation. But I will pick a project and tell about it on facebook.

Instead of collecting a donation I want to tell you something about my work for the women’s office at my university. Perhaps like that I can support some females from my university. My task is to search the internet for interesting courses and to supervise them. This semester we are offering three courses only for women. They only have to pay €10 and the rest is… Continue

The shortage of midwives in poor countries

I chose the story about the shortage of midwives. This article is saying that every day 1,000 women and 5,500 newborns are dying because there is not enough medical care.

The organization “UNFPA” tries to fight against this. They call for investments in midwives programs. And they want to join the Triennial Midwives Congress in June in South Africa.

I found a website about midwives in poor countries:… Continue