Narrator: When EVOKE was exposed by Alpha, Alchemy knew the Network's curtain will be unveiled anytime soon. The fat lady has sung. It's cast, either awaiting applause, encores...or boos, and rotten tomatoes. EVOKE was able to function because of its secrecy. Now, more than ever, the show must go on...

1. What are the goals of the network? How does it work?


The Network exists for one purpose - social innovation. A lot of things in this world can be improved. Individuals rarely do it on their own and problems usually need collaborative, multi-sectoral involvement. EVOKE is a platform where a community of social innovators can LEARN about the problems and solutions, doc**ent their ACTions, and IMAGINE and better world.

2. Who are the members? Why do they join?
EVOKE…

1. WHICH great challenges and social problems should the EVOKE Network tackle next?

Education, Environment Protection and Public Health are the least prioritized sectors in my country (in terms of budget allotment). Yet these three probably have the most long term effects to the nation. Here are some specific issues Evoke could tackle:

IMAGINE9: WORLD 2.0: The Power of Telehealth

The University of the Philippines Manila National Telehealth Center has been using SMS and Email to connect rural-based physicians since 2006. When the new strain of Influenza scattered all over the globe, no one was safe from panic. Everyone rushed to the health centers. Resources were getting scarce. The country needed a rapid way to disseminate up to date information even to the…

Challenge five: Experts and the public have different views.

The public and our medical experts have different ways of viewing the world and that can be a communications challenge. When we…

I'm celebrating my 100th birthday today. No one came. None physically at least...except for my loving wife who is always at my side. A lot of friends greeted me in a social network, some left a message in my voicemail, while some left electronic gifts and cards.

The Community-Based Natural Resource Management Network provided information on previous projects in the Philippines. One of which was the Palawan Tropical Forestry Protection Programme (PTFPP), a plan that aims to help in the conservation of the forests of Palawan.

With the growing tourism… 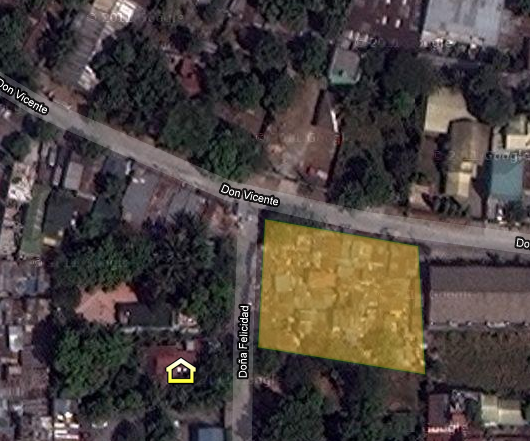 The yellow house is where I live right now. We are surrounded by trees that were planted by my parents, grandparents, and other relatives. They were able to build a haven for us by helping one another.

On the other side of the road (represented by the yellow box) is a large area with informal settlers, living in low quality houses made of…

The University of the Philippines Manila National Telehealth Center (UPM NTHC) in partnership with the City Government of Pasay has been actively involved in delivering health care services more efficiently by computerizing its Community Health Centers.

Here in the Philippines, I can see a lot of ways Ushahidi can help our country mainly because almost everyone here owns a mobile phone. The power of crowdsourced information is really applicable especially when resources are limited and it allows evidence based interventions.

I have a lot of ideas mixing in my head right now...so I'll just focus on the ones I can explain the most.

1. For Environmental Watch. Recently, a "rape of the ocean" occurred in my country.…

IMAGINE6: World 2.0: All the World needs is LOVElots

Today marks the 10th Anniversary of Lovelots - Baked Pastries and Beyond. It's founder and owner, Ms. Melissa Pedrena shares her rags-to-riches life story in a local news network. Even after becoming a billionaire, she continues to be humble and simple, a living example to all people striving for a better future.

To empower other women (and men), she conducts free workshops on…

Recently I helped my friend start a baking business called Lovelots. I encouraged her to find something she is good at and also helped her setup her own website. After doing so, her number of orders has drastically increased. She makes really good cake and cupcake designs and they taste good as well!

You can also help her out by simply liking her…

My country had equal rights to women even before I was born. However, women-related violence is still evident. Every now and then news about rape and abuse is reported. That is why it is a good sign when women are allowed to express and do what they can for a better tomorrow.

Philippines: Women Sowing the Seeds of a Brighter Future

A new form of banking has emerged in the Philippines that aims to uplift the status of the poorest of the poor. This innovation began with the 'Bank of Change', where Filipinos classified as 'severely poor' can exchange their coins (also known as 'change', hence the clever double-meaning name of the bank) for more than its original monetary value.

I did a little twist with this mission.

I've made an online version of this called Favor-it! It is basically a google form where people can try to help one another. Here they can submit their problems as well as the… Continue

M-pesa is used in Kenya for basically anything - to pay for taxi rides, electricity bills, or even buy water from a water pump connected to a cellphone.

Here is doc**entary explaining how it works:


In developing countries, the mobile phone can be found anywhere. You can pay anyone for any service or goods they provided since everyone has a unique mobile number.

One risk is when your phone gets lost or stolen. That is why it is still… Continue

Wow this is probably the fastest mission I will be able to do. I actually contacted the Ateneo Innovation Center already...I was trying to know more about their innovations for LEARN4. Here was my email to them:

My name is Sid Cardenas and I'm currently playing Evoke (http://urgentevoke.com), a social impact game developed by Jane McGonigal and funded by the World Bank Institute. It is a game… Continue


Here is one method posted by Zack Scott on how to use the power of the sun to have drinkable water through simple evaporation and condensation.

Though it is important to note that it doesn't filter everything. Dense materials such as dirt will be removed for sure.


I can barely hear myself think. People are already celebrating the coming year.


Fireworks from Bulacan exploding continuously, multiple drunk karaoke bards singing different songs non-harmoniously, and 'Torotots' trying to beat vuvuzelas as the most annoying instrument ever made (no offense).

Though I live in a tropical country, the rainy season still brings cold weather.
As such, we still use electric water heaters like the one below to have that warm, comfortable bath. 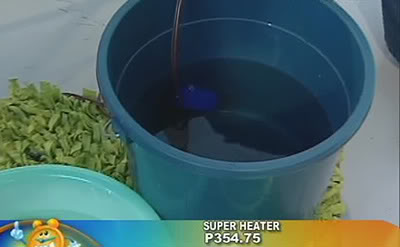 the heater is the blue bulb-like thing floating in the water. it's simple technology - the bulb is plugged to a socket and heats the water with conductors inside…