The EVOKE network is a union of many agents around the world who are interested in changing the world. They feel and consider the different problems of the world and it's inhabitants and want to change it.
Through different missions in ten weeks the agents are confronted with several challenges of the world, especially in season 1 problems of the African continent. The agents are asked to find solutions in an efficient and humane way and to cover methods which save…

When I am thinking about the future of the EVOKE network and what urgent challenges could be tackled next the following problems/spheres could be in the centre of attention:

> Special attention should be given to the future and the education of children in different parts of the world. Every child should get the…

I am very interested in phenomena like human stampedes as an act of mass impulse among a crowd of people in which the crowd collectively begins running with no clear direction or purpose for example during an offical sporting or music event. So I decided for the fourth secret "Managing Panic in a Pandemic".
Furthermore it's very interesting for me how journalists react during a pandemic and how they publish information of the government to the general population. In…

In Germany there are no more wild brown bears. By the Middle Ages they were driven back into remote areas. Beginning of the 19th Century man had also wiped out the last of them - 1835 the last "German" brown bear was shot in Bavaria (Ruhpolding).
170 years later, a brown bear was first spotted back in Germany: JJ1 ("Bruno") stopped in spring 2006 some time in the German-Austrian border area. The bear came from a resettlement project in the Italian Alps. After a warm welcome in Bavaria,…

I read in the'Braunschweiger Zeitung' that Brunswick is one of the most popular cities in Germany regarding to living standards and comforting atmosphere. Especially Brunswick got positive features for cityscape, cleanliness and safety in a representative EU-citizens' consultation…

I live in Brunswick. It is quite difficult for me to face a possible local crisis in the future. But one potential crisis could be modification of foodstuff. As we saw in early summer 2011 the EHEC bacteria (H5N1 virus) was a major threat to the public health in Germany. At that time members of the opposition heavily criticized the government's ineffective response to the emergence of a…

In 2020 it would be a great improvement for all women in the world when (sexual) violence could be described with Once upon a time...

So it is with the women I empowered in ACT this week. The association 'Frauen helfen Frauen' has helped many women and families to left behind years of violence and confrontation. Now the women are ready to be not a victim anymore, they have developed, become more confident and self-assured and they now help other women. They got help…

For this week mission I informed myself a lot about violence against women and children. So I decided to support an association which helps women who are not able to extricate themselves from their awkward disposition. And this association gives starting aid for a life after violence and savageness.
But for me it was important to support an association which is around me so I can be sure that my donation came in. Some days ago I phoned with my parents and I told them about my thoughts…

Investigating about empowering women I found a lot of 'examples' around the world which affect physicality of women. For me it is really detesting and cruel to force women and unfortunately also children into sexual acts.
I am particularly saddened by the atrocities Haitian women often have to endure. After the earthquake in 2010, the situation for the inhabitants especially for women was inhumane and degrading. There was no security in the displacement camps. There was no food; there… 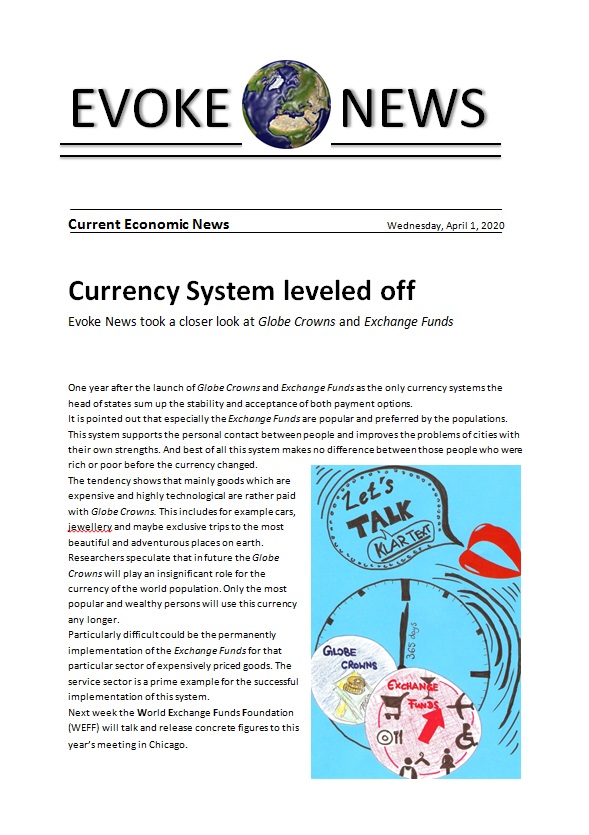 This week I want to tell you about my experiences to 'exchange deals' in my hometown. There it is really distributed that the inhabitants, but mostly children, can earn a free time adventure by theirselves.
In autumn the kids collect for instance chestnuts and acorns to exchange these for an entrance card to the zoo or other leisure facilities. Consequently they and their parents are able to get access without paying money. With reagrd to the social development and the widening gap…

The future of money_05

By reading some articles about money and alternative systems of currency I found a really fantastic example which shows the improvement of a town from third world to a first world city. The talk is of Curitiba , the capital and largest city of the southeastern Brazilian state of Paraná.

Every German uses about 162 litre of water during the day. That means depicted a filled bathtub. One single toilet flush in the industrialised countries consumes as much water as one person in a developing country has at his/her disposal for washing, drinking and cooking per day. So this facts put me in a refelctive mood. One way of responding to this could be the use of special water-saving toilets and showers, repair of seals and use of rainwater could be only some small improvements.…

If I have to imagine about 'Happy World Water Day 2020' I see a big event around the globe. I would like to suggest that similar activities are happening at the same day to the same time on every continent. That means at least 7 and not exceeding 14 events (=2 for one continent).
First of all famous people are needed who support this event. At all locations there would be a big concert which is free of cost for everyone. Participants need only to take over a…

Informing about water crisis and some ideas to solve this problem I discovered the proposal of Ramon Hansmeyer. He developed a business concept called 'drinking water for Colombia'.
He travelled to Colombia to get to know country and its people. Here Ramon saw, that especially many small villages, have a planty of water supply. But the problem is that mostly rainwater, groundwater or river water is…

When I think about a special day in 2020 maybe it could be the wedding of my little sister.
Its summer, the sun is shining and the day is prepared. The marriage-ceremony isn't so far away from place of celebration- an old manor house with a little lake and a huge meadow. After the ceremonial event we drive to the location where all friends are still waiting to celebrate the bridal couple. My sister is an incurable romantic so we ride on a horse drawn carriage.
The celebration is…

For this week challenge I thought about a simple way to power something of my everyday life. Each day, if the weather is fine, I am using my bike. Recently when I cycled and the sun set I had to turn on the light. On my old bike the light is generated by a dynamo. At this moment I remembered of a generator flashlight my father used a while ago. This principle to generate electricity only with muscle power has been already…

First of all I have to say that I am very impressed by the ideas of Jessica and Hugo which are mentioned above. They use evidently 'easy' ways and equipment to improve the energy supply of those who are not connected to the power supply system. Furthermore they made sure to use only affordable and regional specificities to implement their ideas and conceptions.
Noodled over that 'stories' I had a look to suggestions for generating energy which are forward-looking around…

I'm really not sure whether my nutrition will change significant in 2020. From today's point of view I think my taste won't be different that much. But if I think about a meal in 2020 I imagine that the preparing will start at the weekly farmer's market. Here it's possible to buy fresh seasonal ingredients and to consult the farmers directly about their produces. Furthermore it's possible and of course very important to stimulate the regional agriculture.
Since nearly 6 years I adopt a…

I grew up in Mecklenburg-Western Pomerania, a federal state with many space, arable lands and lakes. For as long I am able to remember my parents had always a garden to cultivate. Some vegetables and fruits are so called 'steady runner' in our backyard. For example potatoes, onions, beans, strawberries, raspberries, blackberries, cherries, apples, rhubarb and herbs like parsley, chive, dill and others are harvested by my parents every year. In this large garden there are often too many…