Capacity-building in Africa by moving educator/entrepreneur to Africa with capital and project, to create jobs and provide training in open-source collaborative systems. 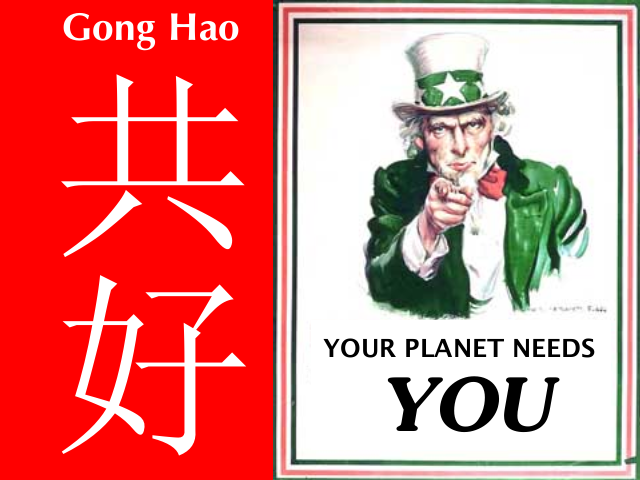 (This is a placeholder image. I need a graphic designer!)…

I've been looking at other people's plans to try and get good ideas about PRESENTING my own plan, and I wanted to share a few resources with the community.

There's an awful amount of passion on show at Evoke, and some of the Evokations look amazing. But many are also a bit 'one-sided' in that they focus on the problem rather than the strategy for solving it and what you can contribute. They're all about what we need (in order to solve… Continue

Gamers, teachers, I need your ideas

I used to work in sales, now I'm a teacher, and I'm participating in Evoke after seeing Jane's TED speech about using games to teach people. I use stuff like… Continue

This is a story I wrote a couple of years ago, copied here for the benefit of anyone dealing with impossible demands.

One of my students told me something wonderful last night, and I want to share it with the world.


It has to do with the power of positive thinking, improvised comedy, success in our endeavours, an advertising slogan used by a famous sportswear company, and the ritual humiliation of English teachers in high schools. It may also be relevant to…

I just read the rules...

EDIT: This post is now redundant as the rules have been changed. Hallelujah! And thanks to the PTBs for listening....

Thanks for this feedback. Points all well taken. In the spirit of EVOKE -- we listen, learn, adapt and evolve. EVOKATION prizes now open to all
agents of any age. See blog --…

Ten years later, as conservation work continued in the… Continue

Taipei, ROC: Taiwan today became the first jurisdiction in the world to adopt energy as the basic commodity underwriting it's currency.
The New Taiwan Dollar will remain in circulation indefinitely, but from 1 April 2020, electrical energy must be paid for using the new currency, forcing banks to convert all existing customer accounts into multi-currency accounts. Under the scheme, customers can use their debit cards in… Continue

Q: Some problem with the tagging thing. Was my last post too long, or has the thing stopped working? I can't log my evidence.
A: Probably the post was too long. No reward for hard work, is it?

The proper article can be found here - http://www.urgentevoke.com/profiles/blogs/indigenousity-and-my-bonsai

Welcome to the Evoke Network.

We are a global organisation dedicated to solving the world's global problems. You are joining a network of agents who have taken individual responsibility for saving the world.

Our members are people like you. We come from different backgrounds… Continue

The problem with dark sites is that nobody knows they are there until it's too late. And when you find them, you're not familiar with them so they have to follow a fairly simple format - like a brochure. All the information flows in one direction.

My new site, still under development, contains many tools that can be used in an emergency. By cultivating a large member base during normal times, it is possible to build… Continue

One Laptop Per Taliban

This is just an idea for an Evokation, and as I already have a big one under development, I'm quite happy to see someone take this and make it their own.

Here's the deal: the biggest single problem in some areas of the world is that one particular group has a monopoly on 'the truth' and are able to maintain that monopoly by restricting access to information. In places like Afghanistan, where few people have access to education, religious authority is claimed by people who are free to… Continue

The future is now

I think the first thing the next Evoke needs is clarity. Who is this site for, and what are it's objectives?

As of today, 46% of participants are from the USA - a country which is listed seperately at the top of the 'select a country' thing, so I assume the target market is Americans. This is kind of odd, as the official explanation is:…

To be honest, I haven't taken much notice of the comic book stuff on Evoke. When I come to this website, I see a 'panel' and nothing else. All that stuff described in the investigation file is hidden. I have no idea where it is, and didn't even know it existed until today. I don't know who the heroes are, and don't have a lot to contribute in terms of developing a story that has remained hidden to me.

I just checked, and it works in IE, but I use Firefox. If you want me to look at… Continue

Looking back on my first century

You don't need me to tell you that 'indigenous' doesn't mean anything any more. We're all global citizens these days and national governments don't really matter. We're all free to live anywhere and it's not cool to cling to an ancient identity just because of who your parents were or where they came from. But I'm glad to see that many people today are adopting cultures through the World Heritage Cultural Diversity Project. It still amazes me that today people will sign ten year contracts with… Continue

Fighting the boredom during a pandemic

I regularly have to endure periods of 20-30 hours where I can't really leave home due to typhoon weather. During a pandemic, it is possible that people will have to stay home for many days, even weeks, due to containment measures. (I faced ten days of quarantine during the SARS outbreak.)

In these situations, we start to go 'stir crazy' and desperately need to keep ourselves occupied - especially if we face the threat of dying in agony because of an invisible killer. People need… Continue

Life during the SARS outbreak in Taiwan

In 2002/3 it looked for a while as if the world was about to end. I was a recent arrival in Taiwan when Severe Acute Respiratory Syndrome appeared on the scene, and watched events unfolding with a sense of detachment from reality. It was happening to 'them' but not to me.

In retrospect, that was a pretty stupid attitude to take. But most of us are guilty of denial when faced with threats we can't really comprehend. Disease is an invisible enemy, and until it actually starts affecting… Continue

Women are not "the other"

All this stuff about empowering women, and especially the encouragement to donate instead of actually doing something is really starting to piss me off.

While researching this one, I came across a fascinating blog post about a reservoir project in Taiwan that is being blamed for the loss of 500 lives last year.

In short, water is being diverted from one area to another in order to put it in a reservoir. But in doing so, environmental damage is caused that leaves many areas less resilient in the event of major events such as typhoons. Last… Continue

The only currency that matters

The foundation of all modern economies is energy, so it makes sense to me that ultimately money is just a measure of our ability to buy energy. Energy is the ultimate commodity, and the best basis for a global currency.

It has been suggested many times that the Kilowatt-hour will one day be the standard unit of exchange around the world, in the same way that wealth was once measured in gold, or buffaloes. One company is now trying to create this currency, in the form of the Kilowatt… Continue

Ushahidi, an alternative use??

I've been musing this week on the connection between economics, security/resilience, and 'systems'. It suddenly occured to me tonight that Ushahidi is a tool that may be adaptable to enable systems for more efficient economics as well as in response to disasters.

To begin with, you need to see this video about how a systemic failure in Africa resulted in famine even while there was a food surplus - Eleni… Continue