I made a pictogram based on some examples that I found online. Unfortunately I do not have the link for it and I am hoping to find it so you can see more examples of pictography or pictograms. I have based my work of art on the following poem taken from Hiawatha.
These are the major pictograms that were used
I utilized a rabbit fur because I couldnt afford bison!!! The plains Indians would write stories on wood, trees, rocks and skins. I would like to note that I am a small part cherokee it is in my blood and am proud to have that heritage.

For the earth he drew a straight line
For the sky a bow above it
white the space between for daytime
Filled with little stars for nighttime
On the left a point for sunrise
On the right a point for sunset
on the top a point for noontide
And for rain and cloudy weather wavy lines descending from it.

This is the story inside the rabbit fur 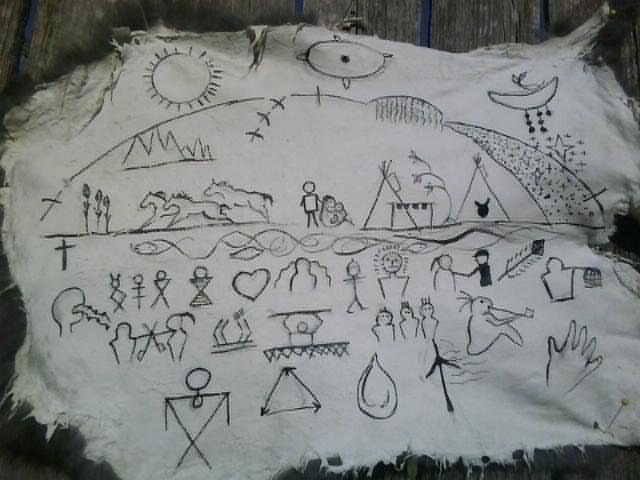 there is a purpose for everything in that picture
Ok so the sun is me! I actually lfet out the indication of sign that would connect it to me but i thought people would get it being that I am Sunny.
The oval shape is the Great Spirit Everywhere the one that has the dot in the middle and the four nubs on it
So the moon to the right is the planting moon which means May and the dark circles connected by teh lines mean the 7th so i made this the 7th of may
So the main drawing is from the hiawatha poem that I quoted
You see the arc in the sky is the bow to represent sky
The line to represent earth below

The mark on the left to indicate sunrise

And then the corn crop for food
The three "crosses in the sky" are geese
The triangle shapes are mountains so all things good inside the bow and arc of the earth!
I made up the water pictogram myself and there are a few fish in there if you look
i wanted to show what is precious
so here is the message that I learned from doing Urgent evoke
Oh the Cross on the left hand side represents my Christianity!
Ok so you see the big head and it looks like it is throwing up? There on the left
that means intense talking!!!

I talked intensely about Direction which it the first three figures,I was seeking direction and moving!
The next symbol is me as woman opeing her heart so that she could hear
The hearing symbol is the one with the figure with wavy lines coming out either side of its head
ok so the man symbol is next cause I had to listen to man as in human
The next symbol means wise man because I spoke to many wise people
Because of the schism on Evoke people getting mad and getting booted
I drew the next symbol of the Indian and the soldier which represent making peace
So the next symbol is the feather which means Power
There was great power in making peace so that led to a treaty (of sorts) so people would move on to do more great thing which the cross pipes and the two figures means
treaty
At that time I was thrown into great doubt about what I was doing on Evoke and realized how important it really was to me but I freaked out and almost quit

The next symbol is two hands are thrown up in supplication for help,,,many agents helped encourage me I moved on and did that post about the bomb shelter~! So I threw up supplication to the Lord and my friends Oh my I needed help!!! I froze~~
.
The next picto is Discovery!!!!!! cause I just went forward and broke through the wall and made the post of the
bomb shelter and came up with this idea of the pictograms and I even
went out and took pictures and video at an eco village for the course!
i really like this next part

Comment by Michele Baron on May 10, 2010 at 4:59am
great post, very evocative, sunny. I love how you merged ancient and new, heritage, history and hope for future in your pictogram rabbit skin and blog explanation. good evoking!!

Comment by A.V.Koshy on May 10, 2010 at 8:55am
lol oh my it is pretty good
:)
good going sunny
hope your post gets as much attnetion as it deserves

Comment by Julio Cesar Corona Ortega on May 11, 2010 at 3:49am
Great post, Sunny. I love all the meanings and iconography you put into the cloth. :)