Food Security in the Wealthiest County in the USA

Loudoun County, VA -- an hour Northwest of Washington, DC -- where my husband and I have lived for 5 years was once again ranked as the "richest county in the US" by Forbes Magazine. So when Alchemy said our mission was to investigate food security in our own community -- well, I felt like it would be waste of my time. But... maybe not. Look, I know where my passion is -- to be part of the solution for the poorest billion on the planet [and none of them live in Loudoun County -- heck none of them live in the USA!] But I decided maybe there was something to learn by investigating what was going on in my own backyard. And so I did.
Is there Food INsecurity in Loudoun County?
Short answer? Yes. Yes of course. Even in here there are children who go to bed hungry at night. And since the economic downturn, the numbers are -- of course -- growing.
According to 2008 newspaper article:

What's concerning us now is that demand is growing at a faster pace than we've ever seen at the food bank," said Martin L. White, chief executive of the Blue Ridge Area Food Bank Network, which distributes food to people in Loudoun and 24 other counties in northwestern and central Virginia.
Officials at the network said they are getting requests for assistance from almost 4,000 people a month in Loudoun, up from about 2,000 in November. For years, the nonprofit organization has served mostly Loudoun residents who are poor enough to qualify for government assistance. But with rising food and fuel costs, network officials say their clientele has expanded in recent months and includes many people whose incomes are higher and who had not sought help before...
"In addition to the increasing demand from wage-earners, the food bank network said it is fielding more requests from elderly people who rely on fixed incomes. For example, the network's Winchester branch, which serves people in seven counties including Loudoun and Fauquier, provided food to nearly 33 percent more elderly people in March than it did in March 2007, officials said.

From a Spring 2009 Newsletter of Loudoun Interfaith Relief:

And here is a local newspaper article from February 2010 about a new food pantry opening as the need continues to grow. This county paper doc**ents basic demographic info for Loudoun county in 2006 and finds that 2.9% of the overall population and 2.9% of the children live below the US poverty line. But as any social/economic activist in the US can tell you the poverty line is a joke. [Meaning it is way too low. In reality people who make twice what the poverty line is in Loudoun County might still have a hard time making ends meet.] So in reality it's more like 8% of the county's population that is eligible for food assistance.


Finally, access to some VA demographic databases yielded this info: 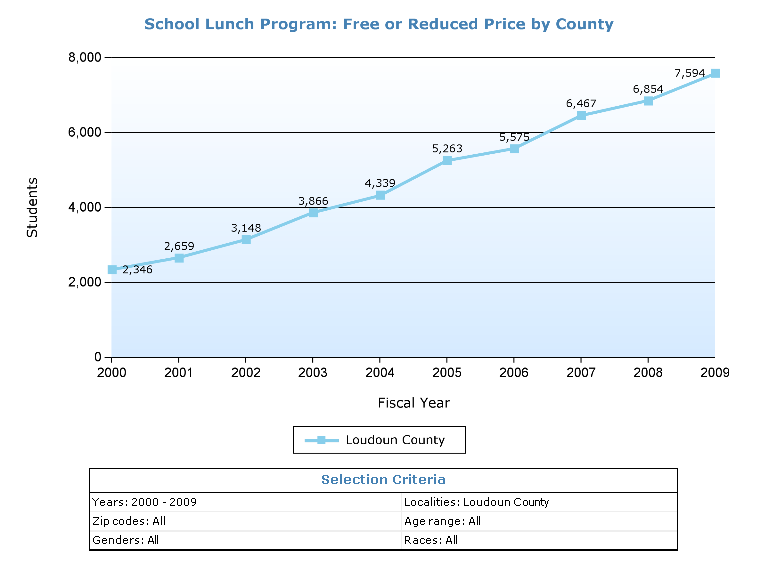 A definite trend.
So. Yes. There is a food security problem in Loudoun County.
I know we are supposed to doc**ent an innovative solution in the same piece of evidence -- but this is getting too long. So I will address local solutions in a follow-up post.

Comment by Jane A.W. on March 12, 2010 at 4:29am
And I bet alot of your neighbors don't think there's a food security problem in your area either.

Comment by Sara Wickenberg on March 13, 2010 at 4:27pm
Thanks for sharing your research, Ayala! I am facing the same "problem" doing this mission. Living in Sweden where we have a social welfare system that offers support for unemployed persons or those suffering from long-term sickness, it would be easy to say: poverty and food security isn't a problem here.

But of course it is. One of our biggest problems is distributing/sharing the food supply. Between countries or within the same local area.

Comment by Fleep Tuque on March 13, 2010 at 10:09pm
I had the same reaction when doing research for Cincinnati. I had no idea my township has "food deserts" or that 31 neighborhoods in Cincinnati don't even have a grocery store in them. I guess it's shocking what you can find in your own back yard!

Comment by Jane A.W. on March 14, 2010 at 4:12am
While I know a goal of this wh*** project is to build social innovation and aid for Africa - I think Americans can start by finding out how the 'other half' (or whatever fraction) lives like in their own country. Maybe they won't discount social problems as just the inescapable nature of 'backward countries' and 'backward people' that way.
This made me think of the weirdest thing - I recently watched a movie aimed at kids (Kitt Kittredge: An American Girl). It's inspired by the Doll set, but it is set during the Great Depression and shows people finding poverty in their own neighbors.

Comment by Michele Baron on March 16, 2010 at 4:32am
food insecurity in Fairfax County, too. It is a tough place for many people to live--and the working poor and disadvantaged must compete for the same few jobs as the large ranks of similarly unemployed, underserved poor in DC, Baltimore, etc. small steps, backyards, local efforts are needed here, as elsewhere. And there are so many language challenges here, as well. People able and willing to help other people are certainly to be valued!