Homeless in a First World Country

In the late 2000's the world has seen the effects of what has been called "The Great Recession." Starting in late 2007, a financial crisis began to stir within the United States. Financial institutions were taking part in lending practices that were considered reckless and unsustainable. The breakdown of these high risk loans began to expose the fact that many assets had been grossly over-priced, especially in the real estate market. People began to lose their job, default on their mortgages, and lose their homes to foreclosure.

Economists are now telling the world that the recession may be over. At least it is headed in that direction. Consumers have begun to pick up the pace and spend the money that they were saving during the recessional period. Unfortunately we don't all fall under that category. What happened to the people that lost their jobs and weren't able to find a new one because of increased competition in fields where there wasn't any before? What about the people and families that lost their homes and had no where else to go? Families and children are the fastest growing homeless population in the United States. Sadly, it has become a daily sight when walking down the street in urban environments to see homeless families sitting with signs asking for help. Recently there has been an increase in the homeless populations in rural and suburban areas. We often see someone standing on the side of a freeway exit asking for money. 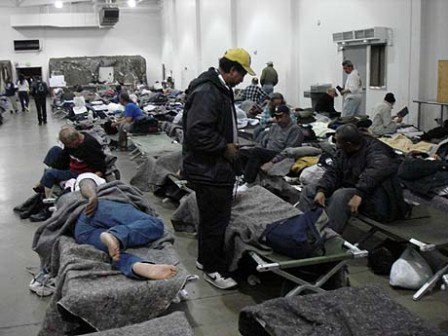 Many people look down upon these homeless individuals thinking that they are only homeless because they made themselves that way. Many people assume homeless individuals are either drunks or drug addicts who are victims of financial irresponsibility. We often wonder why they don't just go to a shelter or try to get help through government programs. Homeless shelters are often worse than living on the streets. They are extremely overcrowded and sometimes are dangerous places for people like women in children.

It wasn't until recently that the U.S, Government decided to listen to the plight of the homeless and provide funding for transitional housing and shelters through HPRP and HEARTH. Unfortunately as with everything that is government related, there are issues with eligibility and community roles under these two acts that are making it hard for homeless advocacy groups to get the funding they need. 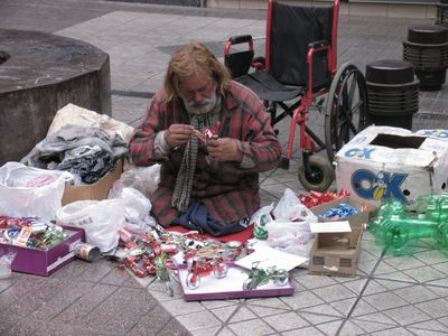 Until society sees the importance of getting these victims of circ**stance off the streets, images like this will forever be a part of our daily lives.We need to do all that we can to help these people out and get them the help that they need. My previous blog "A Walk in Your Shoes" can help you to think about what you would feel like if you were in their situation. In a country that is as developed as the U.S. where we have plenty of resources, homelessness should not be as common as it is. Something has to be done soon to stop this ever increasing problem and the change can start with us.

Comment by Lynn Caldwell on March 4, 2010 at 9:05pm
Hi. I've given a Local Insight power vote. I've said a similar thing in my blog (although not so eloquently!). I believe that we need to get all the stories together, this situation shows us that the problems come from those who are in charge of all the money in this world are causing all the problems...ooo....it's also given me a blog idea! Cheers :o)

Comment by Brandon Spearman on March 4, 2010 at 9:12pm
Thanks Lynn! It definitely needs to start with the people that are handling our money. Corruption is sadly very prevalent in this world and often times money never makes it to the places where it is needed the most. I'll check out your blog for sure!

Comment by David Sahlin on March 4, 2010 at 9:42pm
I agree with the local insight here at home. Though it reminds me of a program I think I heard/read about somewhere, where they combined microfinance loans with providing homeless people with unused homes - and nearly all of them got on their feet.

Comment by Armando Guevara on March 5, 2010 at 3:07am
Brandon, I am so moved by this blog. Actually, I've been watching the news about how bad economy we have. I started seeing people losing their home, jobs, and money. I feel so terrible about it. I don't blame anyone who corrupted our and their economic system. I just wish that people need to control their budget and will to work at low-wage jobs such as McDonald. I mean, who knows it might be worth their time? Like, a fresh start. My family has suffered financially and we started working at Burger King. We saved up a lot of money for each family member in this house. We have been living well, but we, of course, have some downs. I just want to set some kind of program that helps people to learn how to maintain their budget, and live well finanically. For free.* It's for a good cause, right? This just got me thinking a lot. Thanks for this blog!! :)

Comment by David Dreshfield on March 5, 2010 at 7:02am
Great local insight. A Kiva analogue for recession-battered developed nations could be a wonderful impetus to economic recovery in hard-hit areas.

Comment by Brandon Spearman on March 5, 2010 at 7:11am
@ Armando: Your story is very inspirational and I wish more people would think like you and your family!

@ David: I had never heard of KIVA until you mentioned it. It looks like an amazing program and people get to see that their money is actually doing some good. Thank you for the heads up!

Comment by David Sahlin on March 5, 2010 at 9:23am
Once I have a stable income I definitely plan on using KIVA.

Comment by David Dreshfield on March 5, 2010 at 9:41am
Glad I could bring it to your attention, Brandon. It's a really great service, and deserves a lot of credit for kicking off the microtransaction paradigm that we're seeing all over the place now.

Comment by Jerry Rae Leyland on March 5, 2010 at 10:07am
Its great to see that you feel so strongly about poverty!

Living in South Africa, I see signs of poverty daily and I think its important that we don't become too complacent and accustomed to it. Poverty is not acceptable and we need to fight its causes.

Comment by Shakwei Mbindyo on March 5, 2010 at 10:25am
I have given a COURAGE power vote. It is not always easy to (1) see such people and (2) be their voice. Thank you for sharing and caring.