LEARN2: My process - Part I

Instead of simply posting my LEARN2 after I have done my learning, I will doc**ent the process here on my EVOKE blog.
To me, the process is as relevant as the end result, if not more. Who knows, seeing the process of others may even be inspiring. At least I know that I feel inspired myself when I can feel the sincerity of the curiosity of others who are in the process. In the process of learning something new, or exploring something that can be of use to many after the process is done.
Food security. This is a very vague concept for me. I know that here in Norway, we import a lot of food, and we also produce a lot of food ourselves. Given that Norway is outside the EU, we can also subsidize local farming a lot more than what would otherwise be the case (as far as I know - I might be wrong!)
Norway is one of the world's biggest exporters of fish. We can afford a huge public sector thanks to our oil/gas income. There are all kinds of public officials checking and double-checking the food that is sold in Norwegian stores. Food security issues in Norway?
So I did some googling, and this is what I found: 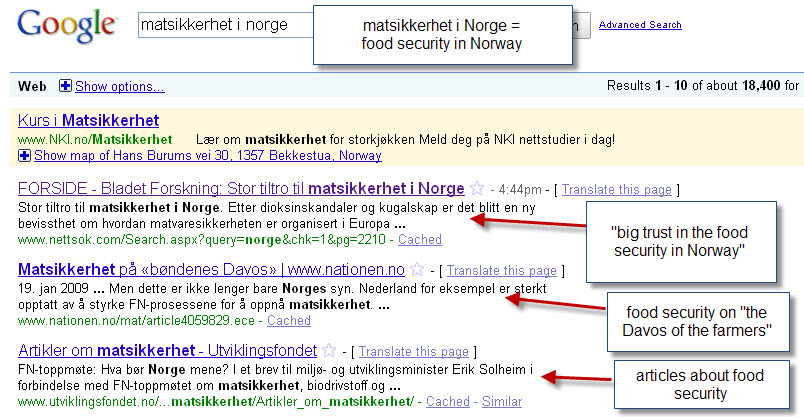 I went for the first link, which was an article from 2000 published by the Norwegian Research Council.

In the article, three female researchers talk about how food security is such a small issue in Norway, even after the cow madness disease and other cases. The article concludes that most Norwegians are having a great faith in the national food authorities - maybe even bordering to naïvite.

I decided to just follow the path of this article first, googling the names of the three researchers:

Where are they now?

Unni is a researcher at SIFO (National Institute for Consumer Research)

Kari Tove is actually holding a leading position at my old university, the University of Bergen!

Lise Hellebø is also a researcher, having published an interesting report last year (in English). I also see, that she spoke at a conference in 2005 about "Food safety at stake - the establishment of food agencies"

Ok, so I guess what I will do is to e-mail the three of them, referring to this article from 2000, and ask my questions from the LEARN2 mission.

My name is Raymond M. Kristiansen and I apologize that I am writing to you in English, even though I am Norwegian.
The context of this e-mail:
I am active on a site called "Urgent EVOKE" which is a website which launched last week. EVOKE is a social networking site sponsored by the World Bank Institute (http://wbi.worldbank.org/) which has the goal of fostering collaboration and innovation on important issues.
EVOKE is presented as an on-line 'serious game', a so-called ARG (alternate reality game).
Here is a CNN interview from a few days ago with Jane McGonigal, the chief architect behind the site:
http://www.cnn.com/video/#/video/tech/2010/03/09/am.game.solves.pro...
I am contacting the three of you because this week, I have as my mission to learn more about food security in Norway. Here you can see my mission:
http://www.urgentevoke.com/page/food-security-learn-1
In short, my objective is
Describe the biggest challenge to food security in your own local community or country -- and an innovative solution that is already underway.
So I did some simple googling, and I found this article from 2000 where the three of you are featured:
http://forskningsradet.ravn.no/bibliotek/forskning/200003/200003060...
My question to you is:
Do you have any good suggestions to me to who I could contact in order to get the information I need for this mission regarding food security in Norway?
I understand that your own time might be limited, so that's why I don't simply ask you these questions myself :)
But unfortunately, my time is short - I need to give an answer to this before wednesday March 17th.
Your response will be made public on my blog on EVOKE, as part of my doc**entation of the process I go through in order to get this information. My hope is that my methods might inspire others, from around the world, in their own mission.
Thank you for your attention.
Best regards,
Raymond M. Kristiansen
(tidligere student ved UiB og aktiv studentpolitiker 1999-02)
tlf: +47 40295447

As I was writing the e-mail, I realized that the best approach would basically be to ask them for leads on who I could contact with these questions. This means that if they were short on time, they could simply spend 1 minute shooting a few names to me. If they were interested in this, and wanted to help further, my e-mail also opened up for that. I gave them a bit of the context for my email, which I think was important - otherwise my question might seem a bit too 'random'.

So, this is where I am now. Sending off this email instead of doing a bit more research first may have seemed 'cheap', but it's a strategy that still might work. I basically asked them for suggestion for names, nothing more. Who knows, the names they give me might be people who are 'on top of the game' here in Norway, saving me the time I would otherwise spend crawling through the system.

I will write a new blog post when I get a response from either of the three researchers, and if I don't receive a response I will write something on Monday nevertheless.

Comment by Ayala Sherbow on March 11, 2010 at 6:16pm
the transparency if very helpful. thank you for taking the time to doc**ent your process.