Nearly two thirds of the earth are covered with water. As about 97% of the water is salt water, there's only a relative small amount of water which is drinkable for the human population. In addition, the United Nations say that "more people die and suffer from the lack of access to safe drinking water and to basic sanitation than from war" which also underlines the enormous importance of fighting against the water scarcity of which millions of people are affected. 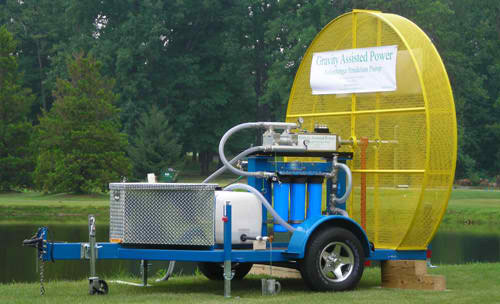 Well, I found information and a video about a portable (what might be important and useful to help not only one, but several areas) system which turns polluted water from lakes, ponds, rivers or wherever standing water is found, into drinking water just by using gravity, respectively a small amount of human support - no other energy, like fuel or electricity, is needed! It's not even required to build huge water treatment facilites like we have in our developed countries.
One system is able to produce over 1.000 gallons drinking water per hour and is able to provide enough clean drinking water for up to 40.000 (!) people daily. In my opinion, this would be a giant help to thousands of people!