The green-centric approach to development

I wonder if all the 10 weeks of EVOKE will be green-centric. Be 10 stories about food, eco-village, plants, harvests, corn types, food, flowers, seeds, and - did I mention food?
Don't get me wrong: I also see the importance of these issues. But I also think that development has many other aspects.
Development also has a political side. International agreements - something which EVOKE in the two episodes of the comic seem to reject. To EVOKE, politics doesn't work. What works is a secret organization which like proper hitmen go in, do the job, and take a hefty profit. Doers, not talkers.
I wonder what will happen when the EVOKE network is exposed to the population in Japan. We get a hint of an opposition at the end of episode two 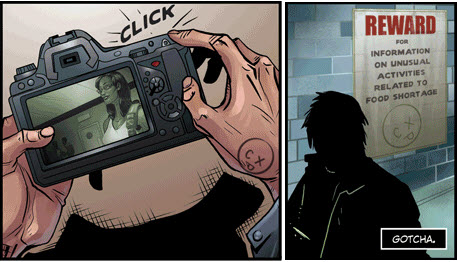 The opposition is seen as a person in the shadow. Are they bandits? Are they people who want to blackmail EVOKE? Are they EVOKE's enemy? Why?

What will happen when the public finds out that the local government gives 50% of the profit to EVOKE, a secret organization where the leader - Alchemy - is represented through a visual scrambler?

The way I see it, development in Africa and around the world is achieved through a ton of work on a lot of different areas. Areas including local governance, anti-corruption measures, and so on. Not just food security.

What do you think?

Comment by James Ream on March 11, 2010 at 5:54pm
These are good questions. Who is making this game? and I agree, hopefully more of the missions will involve different channels/methods of communication/action.