You don't need to know the truth! 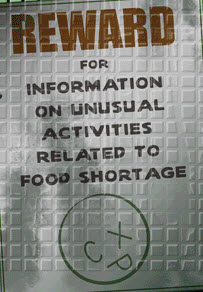 Following the discussion on Citizen X here and here, I will talk about how organizations like EVOKE is hiding the truth, and why Alchemy is against the Citizen X network.
Let's look at a Citizen X of today, 2010: Wikileaks. The tagline for Wikileaks is: "Publishes and comments on leaked doc**ents alleging government and corporate misconduct."
Misconduct. Questions about procedures and results. Where the public demands information, even if the information will hurt the reputation of the government. Uses of the Freedom of Information Act, publishing information that shows inner workings of governments before crucial decisions - like communiation between key players in the UK government before they decided to go to war against Iraq.
Let's look at what Wikileaks might be criticized for:
* Providing information without an editing process.
* Who secures the validity of the information?
* "Some secrets are secret for a reason - the public should keep out"

An early criticism of Wikileaks was its posting of anonymously leaked doc**ents without running it through an editing process and without providing any context — something that many industry insiders (and military brass), including prominent open government advocates like Steve Aftergood, view as “irresponsible,” at best.
[source] Irresponsible organization. Leaking of government memos.
Yup, sounds like Citizen X is partly inspired by Wikileaks.
Look at who works on trying to close Wikileaks down. According to this story,

Earlier this month, Judge Jeffrey White of the Northern District of
California ordered domain registrar Dynadot, LLC to shut down the
domain name Wikileaks.org based on allegations that a former employee
of Swiss Bank Julius Baer posted doc**ents on the website that
highlighted the bank’s dealings in the Cayman Islands.

Cayman Islands? Isn't that a tax haven?
Banking + Tax haven = Interesting
Banking + Tax haven = hush hush.
So when a whistle-blower talks about a bank's dealings in Cayman Islands, that bank itself sues, attempting to close the site down that published the whistle-blower's information.
All right. Let's look at Jane McGonigal and some of her tweeting:
#1

What conspiracy theories are Jane thinking about? Something like this?

attention people this website is not what you think it is a scam , the world bank wants to expand into other areas thay will take youe innovative ideas and use them for thear own marketing and money making plans , i give alot of good ideas and thay closed my account, thay want your ideas and then thay will send you a printable diploma, i alread have one that says i am a doctor never went to med school and never treated a pacient

This was published by John Patrick on this mission post. Can't find it? Nope, because he deleted his account (or his account was deleted by admins, but I doubt that)
Citizen X vs. EVOKE.
What I love about that part of the storyline is that both organizations are doing good things, and less good things. Alchemy has a helicopter taxi service?! Yup: 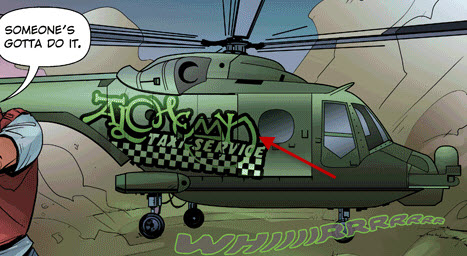 EVOKE is us. We are EVOKE. And what this ARG is teaching us is to also develop a critical mind.
We fight ignorance, and yet we also say that some attempts of uncovering the truth is irresponsible and dangerous.
Sometimes, western countries need to look at the actions of their own government. Sometimes, African countries need to do the same.
We may be EVOKE, but that shouldn't stop us from criticizing EVOKE.
So here is my call:
Out with the secrecy, engage Citizen X in open talks, dare to criticize them publicly - their methods, which may be illegal.
When someone says to you "You don't need to know the truth!" then is when you should really wake up.

Comment by Lynn Caldwell on March 13, 2010 at 9:00am
I'm really not into conspriracy theories, but I was wondering why the global way of dealing with food security was given preference over food sovereignty. Surely, food sovereignty is the way forward? Alchemy did stress that it was interested in ways of encouraging small farms, but the example wasn't weighted against ideas of food sovereignty. - food sovereignty is against commercialised solutions (farmers means of production feeds the global seed markets, introduces carbon rich solutions etc and contributing to the wealth of a system they can't compete in). In the UK, for example, organic farms, small stakeholders work well because they own the land, and have access to it, unlike the current global model. I won't go through the wh*** positives and limitations of each one, I'm ust trying to point out that there are two sides to the story. Food sovereignty ideas have been discouraged by the World Bank - our European Food Sovereignty ideas aren't supported, as in increased investment into small stakeholder farms. greenpeace also advocate food sovereignty, and so do Deutche Bank support the institutional change and revolution of agriculture policy found by the IAASTD...it's a shame that we are having to find this out for ourselves, rather han being given only one half of the story. Please Note: I'm stil a bit sketchy on all the details, I'm busy informing myself before I blog about it to complete my mission...I don't really think it's the intention to be misleading, or an intentional conspiracy - but, still. I think we should bear in mind that this game exists within a certain political context, and therefore, it's important to make ourselves informed, rather than reling on one sourse that's been advocated.

Comment by Raymond M. Kristiansen on March 13, 2010 at 9:52am
Interesting regarding food sovereignty. Do you have any links to stories where World Bank goes out against food soverignty? What are their arguments?

I dont think that there is a conspiracy, but there might be. The conspiracy is not evil, there is no ill intent, but the conspiracy is a result of 'the left hand not knowing what the right one does'. It's the disparity of information which is causing a lot of suffering. The non-sharing of information - basic information like who does what where --- and more importantly: where does Nobody do anything.

As the world media and the attention of NGOs and governments shift, there is not much attention paid to where their attention is NOT.

For a conspiracy to be a conspiracy, it would require some sort of collaboration between different agents. In this case, there is a consensus. What this consensus is, we will explore with time.

It's like looking at the blind spot. You can't, because it is blind. But by shifting perspectives, you still can.

I certainly don't think that the World Bank is against commercialised solutions. The world bank is - a bank. A bank that lends money to countries in need, and those countries often need to make certain policy changes, and also pay an interest rate. Banks can be more or less 'green', but they are rarely anti-commercial.

Comment by Cian Gregory Accuardi Shelley on March 16, 2010 at 4:56am
http://www.adventuresofcitizenx.com/