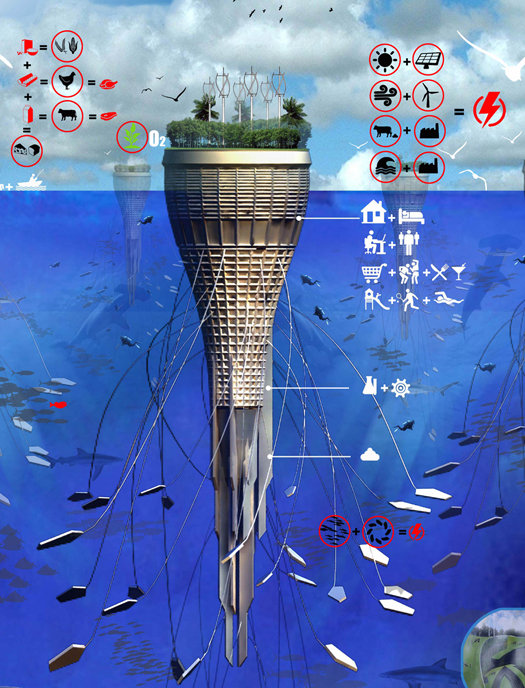 For the last five years, eVolo Magazine has hosted a futuristic skyscraper design competition. Usually, the entrants imagine giant buildings taller than anything under construction today. However, the most impressive entry in this year's competition goes the opposite route, by dropping the building straight into the sea. This floating building would generate its own electricity and food, house thousands, and plunge deep beneath the waves.
Designed by Sarly Adre bin Sark** of Malaysia, the waterscraper would be about as tall as the Empire State Building, but with only a couple of stories exposed above the surface. The wh*** building would be a self-sufficient, floating, arcology. Wind, solar, and wave power would provide energy, hydroponics and the green space at the top would provide food and oxygen, and the structure would provide housing, work spaces, and areas for recreation.
Ballast tanks would keep the structure level, like in a submarine, as would the tentacles. The tentacles would also move around in the ocean tides, generating electricity from kinetic energy.
Adre bin Sark** deliberately designed this building to contrast with the skyscrapers that dominate the rest of the competition, and to highlight sustainable architecture.
Obviously, no one has any plans to build anything remotely like this. But if global warming throws us into a WaterWorld like future, Adre bin Sark**'s aqua-condo looks like much sweeter digs than a rickety boat captained by a urine-drinking fish-man.

Comment by Bianca on March 17, 2010 at 3:41pm
Looks interesting... I would chose to live like this :D :D
Do you know about any negative side effects?

Comment by cameron michael keys on March 17, 2010 at 7:46pm
weird!!!
i heard somewhere that a financial audit of some of the wealthiest dynastic families of Europe and the Middle East calculated that one single family is worth 200 trillion US dollars. when i lived in new york city i saw Ralph Nader at a vegetarian restaurant, he was working on a new book entitled "Only the Super Rich Can Save Us", which is out now. If some of these families can become venture capitalists for urban (and underwater!) Arcologies, big things could change quickly. peace // cameron

Comment by Rahul Dewanjee on March 27, 2010 at 2:14am
this picture totally blew my mind....possibility is imagination!!! +1 for Knowledge Share