Another of my social innovation heroes: Commander Hugo Chavez 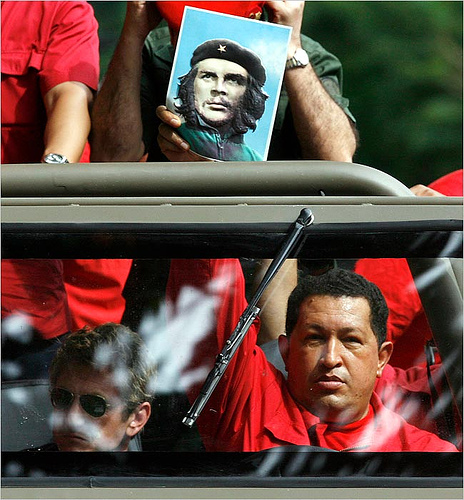 Hugo Rafael Chávez Frías is the President of Venezuela. As the leader of the Bolivarian Revolution, Chávez promotes a political doctrine of participatory democracy, socialism and Latin American and Caribbean cooperation. He is also a critic of neoliberalism, globalization, and United States foreign policy.

whose goals are to combat disease, illiteracy, malnutrition, poverty,

and other social ills. Abroad, Chávez has acted against the Washington Consensus

by supporting alternative models of economic development, and has advocated

cooperation among the world's poor nations, especially those in Latin America.

His political influence in South America and his adversarial relationship with the
United States have given him a comparatively high geopolitical profile,
leading Time magazine to include him among their list of the world's

Chávez was born on July 28, 1954 in Sabaneta, Barinas to schoolteachers


is of mixed Amerindian, Afro-Venezuelan, and Spanish descent. Chávez

was born in a mud hut near Sabaneta. Due to the Chávez family's

impoverished conditions, Hugo Chávez was sent to Sabaneta with his older

where he pursued hobbies such as painting, singing, and baseball while

attending elementary school at the Julián Pino School. He was later forced


At age seventeen, Chávez enrolled at the Venezuelan Academy of Military

Sciences. After graduating in 1975 as a sub-lieutenant with a degree in

Simon Bolivar University. Over the course of his college years, Chávez and

"Bolivarianism" inspired by the Pan-American philosophy of 19th century

President Juan Velasco and the thought of various socialist and communist

leaders including Karl Marx, Vladimir Lenin and Leon Trotsky.
Chávez engaged in sporting events and cultural activities during these
years as well. He played both baseball and softball with the Criollitos
de Venezuela, progressing with them to the Venezuelan National Baseball

Chavez's military carrer lasted 17 years, during which time he held

a variety of posts including command and staff positions, eventually

rising to the rank of lieutenant colonel. Chávez also held a series

of teaching and staffing positions at the Academy of Military Sciences,

and radical critique of Venezuelan government and society. 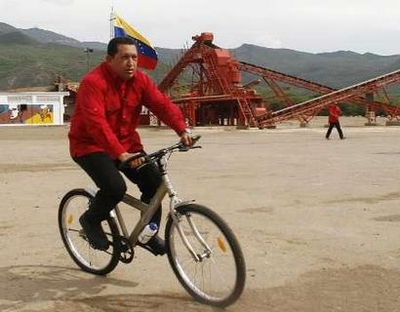 Comment by Wintermute on April 28, 2010 at 5:24pm
Well written. I hope you are able to make contact with Hugo.

Is it just me or do others hate when people where Che Guevara t-shirts. I find it sickly ironic, seeing as how he detested the corporate octopus--damn hipsters.

Comment by Ethan Walden on April 28, 2010 at 5:24pm
Thank you Sarah! I wasn't aware of much of the information presented here,
the Pan-American link clarifies a lot of things.

Comment by Paul Holze on April 28, 2010 at 5:54pm
Hope things work out communicating with him (and perhaps one day meet him)! Anything can happen...I mean, I had the good fortune of meeting Rafael Correa a couple weeks ago when he came to where I work here in the US. Correa is someone I have looked up to because he graduated from the same university as myself, and I have enjoyed hearing his vision for Latin America, much like Chavez's.

Comment by A.V.Koshy on April 28, 2010 at 5:58pm
winter mute i dont get you - whats wrong with young guys wearing che guevara t shirts and whats the connection with the corporate octopus here?
che guevara hated the corporates true
young guys were che guevara t shirts true
why are they damn hipsters
are you fomr the us army
you sound like one of those throwback to the age when the majority of the folks in usa didnt like the youngsters for showing their red leanings and their desire to rebel - also didnt u comment onmy blog recently that it was quite right on the part of evoke to kick sara out?

Comment by Wintermute on April 28, 2010 at 6:37pm
@Kosky--I think Che would die of a heart attack if he saw some suburban American white kid wearing his image on a t-shirt, because that idea is against everything he fought for. Its sickly ironic because the kid wearing the t thinks he's supporting che, although he is doing the opposite.

ps. Srry about not commenting. I though I had made my position clear though that I was in agreement with the administration's decision to temporarily suspend Sarah--I am also glad that she decided to return.

@Sarah--I think that Hugo sound like a very interesting leader and certainly one worth shadowing. America has a history of suppressing and inhibiting south American development so it would be nice to see a leader who will stand up to American demands of cheep labor and cheep material resources. You obviously like him, but what are some of the things that you think his presidency will promote and develop?

Comment by A.V.Koshy on April 28, 2010 at 6:48pm
whats wrong with suburban kids wearing che guevara t shirts?
i still dont get it
how can i - an other - know what che guevara would think of it?