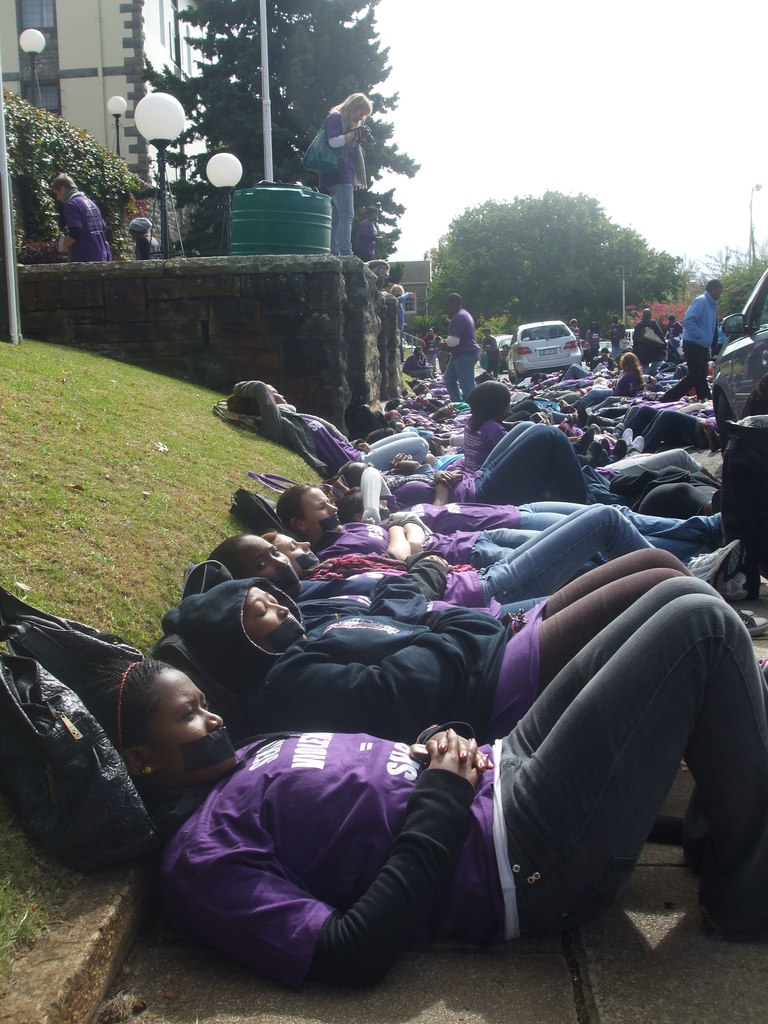 Today my mouth was taped up and I wandered around my university's campus silent for 12 hours in a shirt that read "Sexual Violence = Silence". I could not eat, drink or speak from 6 this morning until 6 this evening. This was all in an effort to unite in solidarity with women who are no longer willing to be victims of rape, but survivors of rape.

This protest is the brain child of of an organisation called One in Nine http://http://www.oneinnine.org.za/1.page. The One in Nine group was established in 2006 when the rape trial against South Africa's President, Jacob Zuma, began. The sentiments behind the campaign was to unite with women who speak out about rape and those who are brave enough to report such a tragedy.

Essentially, only one in every nine women who are raped report the attack to the police. What is even more scary is that only 4% of these reports are successfully prosecuted. These statistics are based on research conducted in South Africa by The Medical Research Council (MRC) in 2006. And from what we know, this has not changed. Women are still unable to stand up for their rights and claim their bodies as their own. South Africa has one of the highest number of rapes per year and these are just the ones we know about. Can you imagine the number of women who remain silent about this attack on their bodies?

This years protest offered four levels of participation. The silent protesters were women who were taped and wore a shirt with "Sexual Violence = Silence" on it. Women who could not remain silent for the day as they were lecturers or needed to drink and eat for medical reasons wore the shirt, "In solidarity with women who speak out". Men were encouraged to take part by wearing the shirt "Men in solidarity with women who speak out". The final shirt was for those who had been raped and were ready to speak out about this atrocity committed against them by wearing the shirt, "Rape Survivor".

The Silent protest is currently in it's fourth year at Rhodes with the first protest taking place in 2007 with only 80 participants. Last year, just under 400 people participated and this year it has grown to 1 091. At a university of just over 7 000 students, one in every seven students played a role in today's protest. What was even more astonishing was the number of women who got up this morning and spent the day in a shirt that read "Rape Survivor". Their courage and bravery was the inspiration for this blog. Campaigns like these demonstrate the power of organised protest and willingness to stand in solidarity with those who have been wronged.

I have no doubt that today's events will speak out against the injustice that is abundant in our society; and with a little more time and energy, we could encourage social change within our communities.

STOP THE WAR ON WOMEN'S BODIES!

Comment by PJE on April 23, 2010 at 9:00pm
This is fantstic and inspirational, brave women! Though I wonder why it is just women, men and boys get raped too.
Best Wishes
PJE

Comment by Leigh Hermon on April 23, 2010 at 9:05pm
Thank you, Sarah.
So true PJE. It is sad we don't recognise this. I think the legal system in South Africa doesn't even recognise rape in men and boys, I think it's referred to as sexual assault. However, I stand to be corrected.