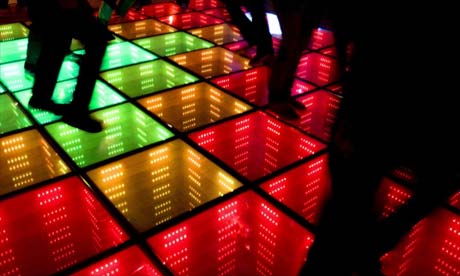 
It is a pleasingly Gallic phrase that brings to mind marauding students and protesting unions. But, while Toulouse's "pavement power" project has nothing to do with social unrest or burning barricades, it
could yet prove revolutionary.

As part of wider efforts to put France's south-western technology capital at the forefront of green wizardry, city authorities are testing out a scheme to generate
electricity for street lights through the stamping feet of passers-by.

Designers say the section of eight custom-made modules placed in the city centre for a two-week trial period can produce between 50 and 60 watts of
electricity to power a nearby street lamp.

It is the first time the modules – unveiled to the world by Dutch company Club"">Sustainable Dance Club (SDC) for use in nightclubs – have been tested on the street. For Alexandre Marciel, the city's deputy mayor in
charge of sustainable development, the new function is potentially
ground-breaking.

"It is a world first," he said. "It is an idea which has existed for a long time in people's minds but which has never actually been made a reality."

Toulouse, France's technological and aeronautical hub, is the latest stop-off for the SDC modules, which had their first outing at
Rotterdam's Club Watt last year and which have since lit the
imagination of designers the world over.

Embedded with microsensors which produce guardian.co.uk on Energy"">energy when people move over them, the modules seemed to Marciel to provide an unprecedented opportunity to
alter how cities save and produce energy.

"It all stems from an observation that, in the public sphere, energy is wasted and it would be good if we could somehow get it back. There is nothing original in that
but what the Dutch start-up had created was new," he said.

Although the authorities say they have succeeded in proving that the idea works – to the bewilderment of some sceptical Toulouse residents – they and the
designers admit there have been problems.

The prototype of the modules, said Marciel, was unsuitable for street use as "at that stage they only worked if you jumped on them like a kangaroo". "So a model was
developed on which you can walk normally and still produce enough
energy to power the lights," he said.

Since last year, SDC designers have been flooded with demands for the modules in increasingly varied locations. Though Toulouse is the first, it is not the only
European city to have recognised the potential .

Jaap van den Braak, the company's marketing director, said Rotterdam's football stadium had recently signed a contract to run a pilot scheme. "There are
several similar pilots projects being considered which use the modules
in public spaces where there is a high traffic movement, such as train
stations and sports stadiums," he said.

Marciel admitted there was a way to go before the dream of pavement-powered street lighting could become a reality. The relatively high cost of the modules remained a
deterrent, he said, but should not put off authorities in cities where
the political will was strong.

"Toulouse has a mission to become the capital of our country in terms of innovation but practical innovation that responds to the needs of the population," he said,
adding that a recent test of heat-sensitive lampposts in the city had led to
the product being exploited commercially by two companies.

Comment by Sarah Shaw Tatoun on April 23, 2010 at 5:51pm
I didn't know Toulouse was France's technological and aeronautical hub. Sounds like the perfect place to try this prototype!

Comment by PJE on April 23, 2010 at 9:26pm
Hello Sarah
This place is busting at the seams with engineers!
Thanks for reading!
PJE