ten years has seen some major changes in the ideas surrounding money and currency. after what is now called the 'Final Crash' of 2018, people finally decided to end the affair with the stock market and unstable trading/currencies. the currencies of individual countries had fluctuated to the point that they were no longer even usable. companies that relied heavily on stock value collapsed. the 'too big to fail' banks were allowed to crash and burn; the smaller ethical banks picked up the pieces. government 'dynasties' fell, as the evidence of horrendous crimes that caused the economic meltdown became public (i was a part of that). people rose as one and elected independent and non-mainstream party politicians. a generation of small, clever efficient companies were finally in an even playing field; they picked up all of the people that lost their jobs in the crash and then some. nothing of worth was lost. the world recognized currency is now the Electric Watt. people store what they can in free containers issued by local community organizations, adhering to international standards. these include large home batteries and small, round yellow spheres called Watt Balls. for beyond what can be held in a single household, non-profit Energy Banks allow for cheap and easy storage, as well as Watt access anywhere in the world's electricity grid.

due to the still fresh wounds caused by bankers before the 'Final Crash', local trade centers and bartering-based currencies are starting to bloom all over the world. 'face time' has also become important; communities are now closer that ever because of the cooperation forged in weathering the crash. i had the opportunity to check out a quite interesting example. 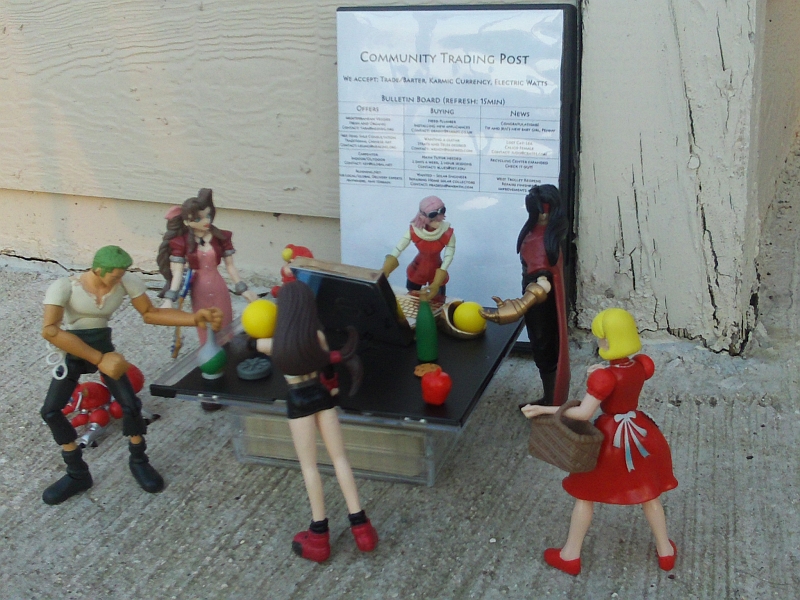 notice the yellow Watt Balls in use and the computer interface. in addition to trade/barter and Electric Watts, they are using a local system called Karmic Currency. this is based around anonymous evaluations of goods and services; these Karmic Points can be collected, traded and used.
http://www.urgentevoke.com/profiles/blogs/karmic-currency
i still hope that the world can achieve a level where currency and money are no longer needed; a world where COMPASSION and PHILANTHROPY trump hatred and greed. amazing changes have gone down so far; i eagerly await humankind's next level of enlightenment.

Comment by Julio Cesar Corona Ortega on May 1, 2010 at 4:32am
Great post. I really love the idea. May be a bit uthopical, but it is still great.

And I love the trading action figures!