Almost every minute of every day in different parts of the Democratic Republic of the Congo, a woman is raped. Says a study published by the American Journal of Public Health, the AJPH. The study says the incidence of sexual assault is 26 times higher than United Nations. The study examined detailed household data gathered from women between the ages of 15 and 49 living in the DR Congo. The data shows that 400,000 women are raped every year in the Congo which means over a thousand raped every day.
Margot Wallström, the UN Special Representative on Sexual Violence in Conflict, said the report helps to better understand the problem.

"This brings more clarity to the phenomenon of sexual violence. It also confirms what we know from before and that is sexual violence is grossly underreported."

"The rate of sexual violence quoted in the new study is significantly higher than the previous estimate of 16,000 rapes reported in one year by the UN"

Margot Wallstom: "I remember this young woman who I met in Walikale and she said that she had been taken out of her home the night before she was getting married and had been gang raped and her wh*** future destroyed in a way. And she was not only devastated but she was also angry. I could feel that that she was also furious that this could be done to her. And she said that a dead rat is worth more than a woman who has been raped." 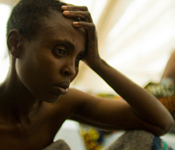