Being high school students, even with such an amount of money, we realize that our powers and resources are limited. We have time and ability constraints. So it took us quite a while to come up with something big enough to make a difference but definitely probable.…

Mission 10: What Happens Next? - Imagine

The goals of this network is to inspire and be inspired, to learn and to teach, to think and to speak up. It is a place where you gain a sense of duty, where you feel the weight of the world on your shoulders and that by just being you and believing in yourself, you can make a difference. It doesn’t matter where you’re from or who you are, it is what you can give and do that is important. The target never too high to reach, the future never too far to see.

The network works as a… Continue

Mission 10: What Happens Next? - Learn

WHICH great challenges and social problems should the EVOKE Network tackle next?
We have come up with five unexplored social problems on evoke.
1. The burgeoning silver generation
2. Fatal lifestyle diseases
3. Unbalanced birth rates
4. dropping educational standards
5. The emptying seven seas

WHERE in the world should the network try to build up new EVOKE communities?
We think… Continue

Mission 6: The Future of Money - Learn

Maybe we can really use the record of the credit note to be the money,and it is my favorite experiment because we don't have to take cash,paychecks,even credit or payment cards--it can be more convenient.Additionally,the record is more difficult to be stolen,that means we will have less robberies than before;the cities,the society,and the world will be safer and peaceful!

We must value these issues coming about all over the world,since these
mean our world is not making progress at all.While our modern medical
science promise we will keep out of dying as delivery,numerous women are
dying owing of the childbirth.We have to take action right now--even if
the surroundings is difficult to send tons of medical teams to live
there,yet ,at least we should let some people know how to handle the
incidents and the situations of emergency.On… Continue

Global warming of the earth will also cause sea level rise, scientists predict there will be three possible situations. The first one is the best situation, but also the smallest increase in sea surface where it is needed immediately to strictly control the emission of greenhouse gases in 2050, when the sea will rise 13 centimeters, in 2100, when the sea surface to rise 28 cm. The second is a bad situation, but also a large increase in sea surface where it is not currently control greenhouse… Continue

I believe we Taiwanese must be ashamed about the way to
conserve water--we don't make it thorough in our lives.I am of the
opinion that we can apply funnel to our water tower on top of our
building to receive the rain.I'm deeply convinced that not only our
costs but the nature are going to take advantage of this descent idea!

With environmental issues about global warming, energy crisis and so on, many countries have been aware of the protection. Besides, innovators around the world begin to create all kinds of technological devices to generate renewable electricity.

“Using the simple principle of an exercise bike, DIYer David Butcher has constructed what he labels the “Pedal-Powered Prime Mover”. This pedal generator keeps David fit and charges batteries that run an inverter to produce 100V AC. This… Continue

During the outbreak of diseases or war, civilians are certainly the victims. They may react wisely and rationally or emotionally and insanely. In terms of the situation, the government, journalists and the information disseminated by media play an important role in crisis communication. They use any kind of mechanisms to relieve people. “ Managing Panic in a Pandemic” deeply attracted me. As a governor, you must be equipped with psychological knowledge during wars and outbreaks of diseases. The… Continue

To cope with the food crisis all over the world, I have three manners:
(1)To cultivate the sorts of trees able to grow nut.Not only do the people get the food but the tree can keep us from global warming little by little.
(2)To promote the organic agriculture,and we are capable of decreasing,even preventing the nature from the chemical substances.
(3)To grow the vast trees and long-rooted plants adjacent to the river banks and on the mountains; as a…
Continue

It's our ideal map of Taipei after ten years. We love our city! 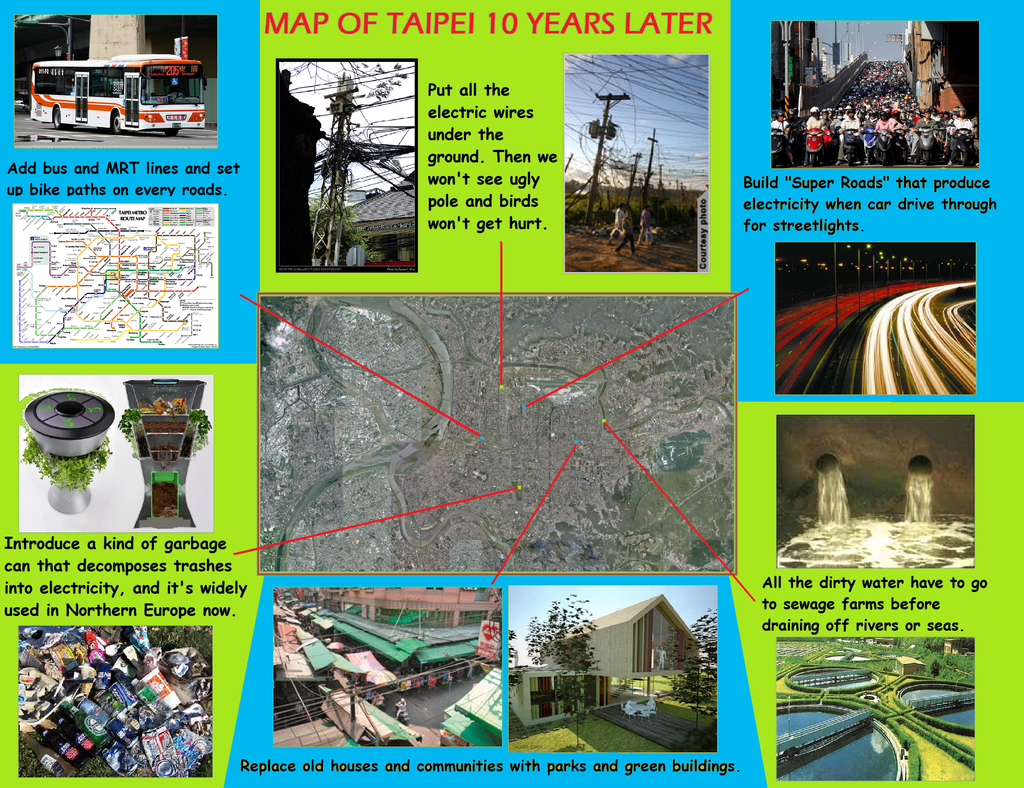 Water resource is one of humanity’s large properties, but it may be used up in the future. In spite of maintenance to the lives on Earth, it may also threaten the human beings, such as dirty drinking water or tsunami. Countries throughout the Earth are devoting themselves into the actions of protecting water resource. Protecting water resource is the act which should be done instantly!
We have been joined a alliance called Taiwan Water Conservation Alliance. Being one of the members on… Continue

Ten years from now, I will be a college student in America . I will be working in a lab all day, trying to find a more
efficient way to produce energy.

I will also be a volunteer in Green Peace, to broadcast and educate people on ways to…

Here come our wonderful site! And some lovely pictures are included.
Click me!

In the year of 2094, I will be a hundred years old, the oldest elder in my country. There will be nothing left but sea, trees and stones. Because people have already run of out all the resources on earth, I mean like oil, pure water, electricity…… and so on. And, of course, car won’t work without oil, all the electronic devices won’t work without electricity. People’s life goes back to the Stone Age. They don’t even know how to make food without stoves. As a wise elder, I hope my people can… Continue

The way we think is the watch or watch not only need to have automatic search function which can research people who wear watch in 500 miles surrounding area, but also establish Compound Internet to prevent one of the Internets from paraslyzing and the others can’t be used, either. And then everyone enter individual information into the watch or cell phone. When something happened, we could use the Internet to search for the person who is the closest to you and fit the requirement, it would… Continue

In the year of 2012, there is the festival called World Energy Day, which is held during the first week of July annually by countries taking part in the conversation of energy and in the development of solar power. In the festival, participants not only encourage people around the world to save energy, water and any kind of resources by making videos or producing advertisements. Aside from that, residents or politicians gather to the street and parade with their hands raising a hung solar… Continue In 2020, due to the sea levels have risen,
we had less vegetables and fruits in our meals. We had dinner at our
apartment in 2012-floors. Nowadays, we run out of our food, so we have
no choice but to cook our lovely dog. Besides, we find a can of corn
which is out of the date for ten years! We are forced to eat dead
bodies! So the dishes we have today are called "fried dog", "stinky
corn", "delicious body". And all of… Continue