I need some brainstorming help - connecting hose bits together...

I've been wanting to build a small geodesic dome out of some trashpicked leaky hose. Up until today, it was mostly going to be just for fun, so I hadn't been putting much effort into figuring out how to do it, but then when I got invited to help out with a community garden in my neighborhood, I realized that the dome would be a perfect trellis for the climbing plants, while offering a bit of protection from wayward bicycles and other larger creatures wandering around the area.

The main idea is to cut the hose into about 1 foot long segments, and assemble all the segments into a 2/3 Bucky dome. But, I'm not quite sure about how to do the "assembling" part.

So what I'm looking for from you folks are some possibilities for connecting several hose segments to each other. (Up to six segments of hose have to come together at the points!) The hose is pretty thick, but can definitely be cut with scissors and drilled with a drill. I don't really have any money, so I kind of need to use something that I can trashpick or recycle. I originally thought of running strips of bicycle tube elastic through the hose and tying it, but it doesn't give enough structural support to hold something as heavy as a bunch of zucchini. If worse comes to worst, I'll beg, borrow, or steal some really long bolts and nuts, and just hope for the best, and hope that the thickness doesn't cause too much of a problem.

It seems like there should be something obvious that I could do, though, but I'm just not imagining it. Any ideas? 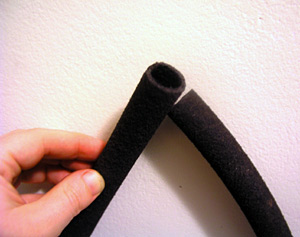 Comment by Daniel LaLiberte on March 27, 2010 at 1:44am
I used to build structures with plastic straws and pipe-cleaners. The pipe-cleaners were cut in 2-inch lengths, and folded in the middle. Then one end each of two pipe-cleaners were pushed into the end of a straw, with the other ends available to join other pipe-cleaners in adjacent straws. The friction of the pipe-cleaners was enough to hold the structure together. Difficult to describe with words - hope you get the idea.

I wonder if you could slice up some of the hose to serve the purpose of the pipe-cleaners.

Maybe if the ring was made of wire it could then be tightened so the hose ends smush together for greater friction.

Comment by Turil Cronburg on March 27, 2010 at 2:52am
Daniel, that was fun! It's definitely a little stronger than the rubber, and using the hose itself was genius! I'm not sure it's strong enough for zucchinis, but it's a start. I was hoping to add something rigid to the hose. But I can at least do this if nothing else ends up being doable, and then just add some internal support, since this particular dome doesn't need to be so open inside.

So thanks! (I really wish we could powervote comments...)

My comment a few minutes ago was for Daniel LaLiberte. And for you Daniel Clarke, that's an interesting idea. The smushing might add some strength, and smushing them together perpendicular to the "surface" of the dome gets rid of the layering/thickness problem. It's a great idea, if I can find a way to make and keep the tension up. I do have a lot of wire that might be just the right gauge. Thanks!

I can see you might need more rigidity since the stability of the structure depends on it. If you don't have anything rigid to insert inside the hose, it might be enough to tie strings between the center points of each hose length and its four neighbors, subdividing each triangle into four triangles. The string would also help add more trellising for the zucchinis to climb on. Some internal strings across the center as you suggest would also help since otherwise the top might sag.

Comment by Turil Cronburg on March 28, 2010 at 12:24am
I finished it! Check it out. And thanks again for the brainstorming, guys.