1. Two(or maybe more) of my posts show I have 1 power vote, but actually I have more than that. I wonder if more people have the same problem.[Solved]

Quoting Nathaniel:
"I have fixed Samiran Roy's votes. There were only the two he identified where the votes on the evidence page were out of sync with profile page.
There a few evidence items that have a similar issue. There are all old items that arose from an earlier bug, now fixed, where the user player was being identified as undefined. This is also the cause of the Neil Spurgeon issue -- that name is associated with the 'undefined' user. I will work on assigning the votes, assigned to the 'undefined' player, to the correct players."

3.Once, evoke turned into this:[Explained by Nathaniel] 4.Julio has another Agent's pictures on his blog, 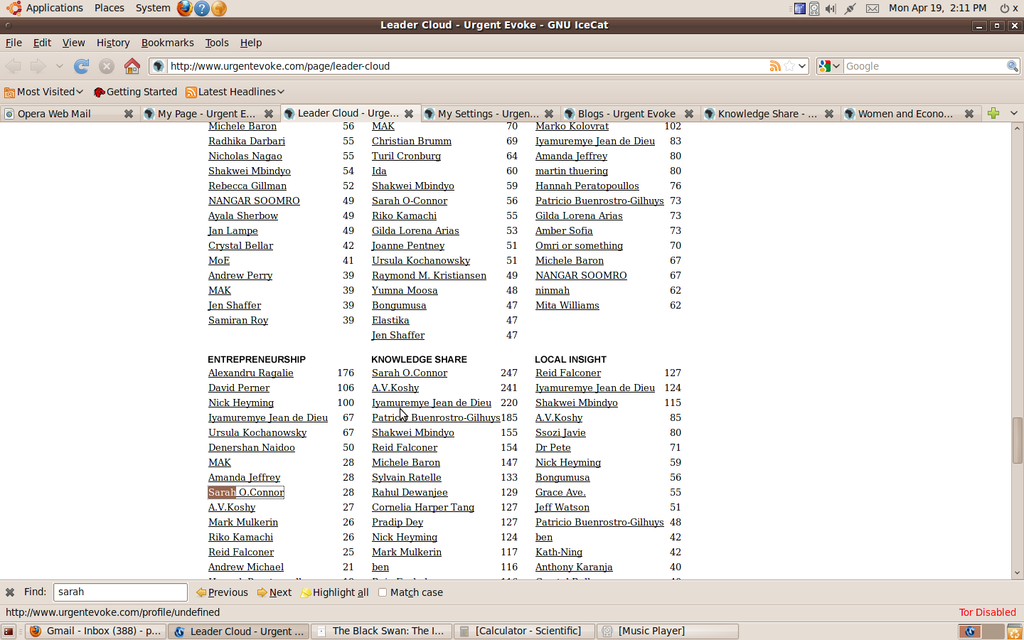 Quoting Nathaniel:
"This is because—surprise surprise—Ning had some problems. The Ning ID is scraped from the page (because of Ning's utter lack of APIs). This has sometimes led to an empty scrape due to Ning's inconsistent source and then the database is updated as "undefined". It shouldn't happen any more. Now, let's get back to focusing on everything left to do in the week or so that we have here on EVOKE."
Sarah:
"Update: now the Neil Spurgeon phantom link, instead of 267KS has 177,
which makes it as inconsistent and shady an issue as it ever was,
we are told that its because he has two accounts,
but if you look for them you will see that there is only one:
http://www.urgentevoke.com/profile/NeilSpurgeon

Is there ANYTHING in Evoke that is not a Ning problem?
After all, the point system doesn't run on Ning,
but it doesn't matter cause most people would believe
anything you say if you include the words "bug"
and "system".
Of course there is one more problem,
Alchemy 2099

Comment by Julio Cesar Corona Ortega on May 3, 2010 at 11:51pm
Actually, they do show for me. I neglected to scroll down enough to find them.

And those definitely are not posted and/or uploaded by me. Ning bug indeed.

Also, right after you mentioned the wrongly attributed photos on Julio's page, I discovered I had a photo that wasn't mine attributed to me as well, but if I click on it, it doesn't exist.

As for the power vote inconsistency, I have no idea. I can't keep track of all the various votes I've got.

Comment by Sarah O.Connor Panamericana on May 3, 2010 at 11:57pm
and number three in Knowledge Share has shared virtual knowledge,
Neil Spurgeon, apparently is a phantom placeholder the admins have fun with.

Comment by Samiran Roy on May 4, 2010 at 12:04am
Ahh
thanks Turil and Sarah and Julio
btw anyone know a.kinsara?
http://www.urgentevoke.com/photo/jim-morrison
he disappeared long ago

Comment by Nathaniel Fruchter on May 4, 2010 at 12:17am
I can't comment on all of them, but #3 is probably because the page didn't load all the way. It looks like Ning's CSS styles loaded, but none of our Javascript customization loaded. That one should very rarely be a problem.

Comment by Sarah O.Connor Panamericana on May 4, 2010 at 12:24am
Can you comment on Neil Spurgeon Mr. Fruchter?
all you have to do is put your mouse pointer on his name on the leadercloud:
it will say "undefined" and you can see there 267 KS points.
Now if you go to the actual Neil here:
http://www.urgentevoke.com/profile/NeilSpurgeon
he has 34 KS points.
This "undefined" link has been there for weeks
with the name changing overtime.
Should we think that is a glitch?

Comment by Michele Baron on May 4, 2010 at 12:29am
a.kinsara wrote some meaningful pieces, but lately lives on in records--like his avatar jim morrison. Perhaps he has a "manager" who maintains the records, and who has, prolifically, taken up his pen... I have seen a few runes light up without posts being added until later--but that was probably my own tech inexperience... I summarily bow to all of your superior gaming and computer-tech expertise--I hope to write some meaningful posts and stay afloat!! good evoking.

Comment by Samiran Roy on May 4, 2010 at 12:41am
Thanks Michele
The quests light up even when you save them without answering anything. Dont know about the posts though.

Sarah both the Neil's are different, there is a spacing difference, maybe the one on the leadercloud got deleted?