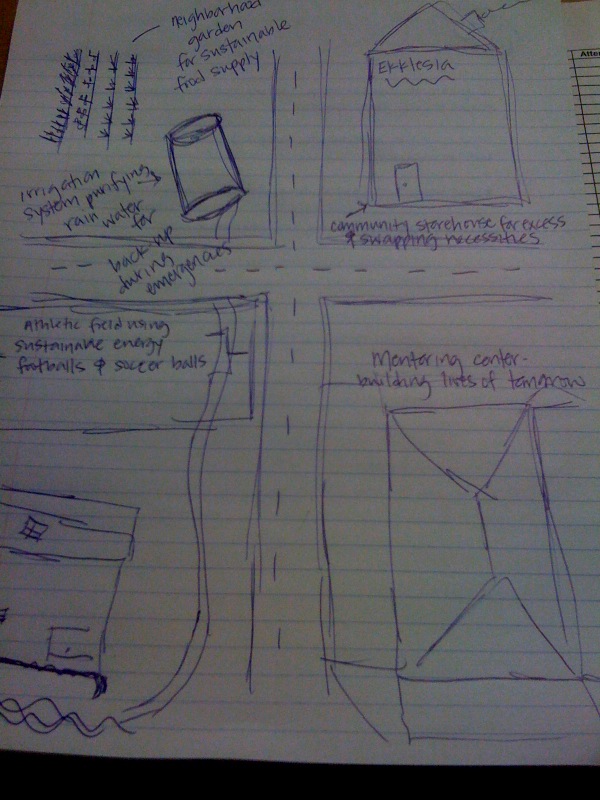 Obviously I'm no artist, but this is what I envision for my neighborhood in 2020. :)

While researching, I found an article by Nell Edgington on social capital in Austin. She focuses on slow money - "a national movement aimed at increasing the availability of risk capital to sustainable food-related social entrepreneurs." Austin has it's own… Continue

When the shooting happened on Ft. Hood in 2009, I was in a classroom less than twenty minutes from the base. Immediately, all nearby campuses went on lockdown, but no one knew why. Teachers eventually received an email with some vague information, but no specifics were given. Of course, we have internet connection within our classroom, so once students were receiving news of a shooting on base from texts, I started searching. Surprisingly, twitter gave me quicker and more accurate updates from… Continue 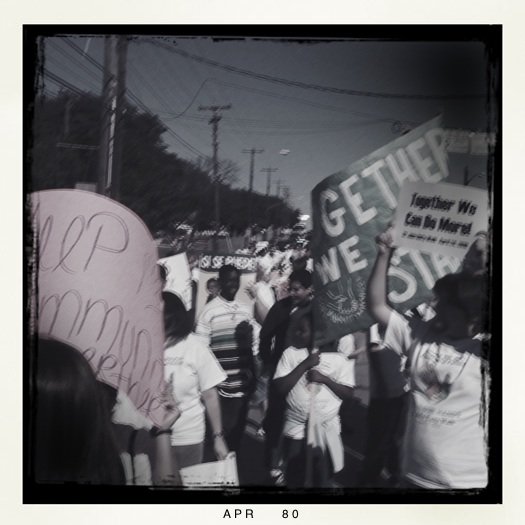 People gathered today for the launch of the community storehouse Ekklesia (Together in Greek). The premise: bringing excess to the storehouse in order for others to gain what they need. One man, who was able to find a coat before the first cold front, said "I never knew I didn't really need all these shoes - and I'm so glad I am able to help someone who may need a pair, just…

My husband has been frequenting freecycle for the past month or so. We've also cleaned our closets which resulted in about four bags of clothes we don't wear anymore. We posted the clothes on freecycle a couple days ago and today we received a message about someone needing them. We'll be meeting her tomorrow to pass off the clothes, and she'll take what she needs and give the rest away. It's nice to know someone specifically will be getting these clothes, as opposed to a random organization… Continue

In ten years: trafficking of women and children will have decreased drastically. In order to free everyone caught in trafficking, we must be just as covert and intentional as the traffickers. The past decade has taught us strategies in rescuing victims of sexual and job-related slavery, and so we now know how to effectively operate a mission to free the girls. Although trafficking still exists, and issues still arise concerning safety of those dedicating their lives to rescuing the women,… Continue

I furthered the cause of women empowerment multiple ways.
First, I spread the news via twitter and facebook about Girl Effect and She Dances - two organizations fighting for the betterment of womanhood. (Girl Effect targets girls as a wh*** - they believe a girl can lead a movement and change her entire village. Amazing. She Dances works to build rehabilitation centers in Honduras for girls facing the threat… Continue

This was a hard choice for me. Haiti is near and dear to my heart, so every time I saw an update with Haiti involved I had to fight from clicking the link. However, what kept capturing my attention was the article about Human Trafficking in Egypt. I couldn't get away from the article - so I ended up reading it. Human trafficking is what I've chosen to… Continue

I haven't received an e-mail back from anyone in the group, but I DM'd the guy spearheading the campaign for getting the program in schools and he said the curriculum writing was "on hold" - looks like I will need to find another way to get involved with a water campaign. :)

I'm thankful for EVOKE in this situation. I'd been wondering what happened with the collaboration for curriculum, but never worked up enough courage to e-mail the necessary people. Not because I didn't…

Maybe it's because I live in Austin, but I've been seeing a rise in co-ops this past year. Some of our closest friends have a date-night co-op consisting of about five-seven couples. Every Monday, one couple opens up their home in order to baby sit for the remaining couples while they go on a date. Thus alleviating babysitting money and at the same time, entrusting your kids to someone with whom you are close. Perfect scenario - and everyone I have talked to about it says they wouldn't trade it… Continue

Austin - On Friday, thousands gathered to celebrate World Water Day downtown. They were hard to miss - frozen on the sidewalks of 6th, walking with jerry cans towards Town Lake or dancing in a flash mob in… Continue

I am a huge fan of what Scott Harrison has done with Charity:Water. If you don't know his story, I encourage you to check out their site. Last year, I started working with a few other educators on curriculum for their Water for Schools initiative, but I hadn't heard anything in a couple months. Knowing the hectic schedules of educators and the incredible year Charity:Water had, I emailed the group in hopes to get the ball rolling again… Continue

Evokers: Let's Not Change the World

This was taken from a post James Pearson (Acholi Beads, Choice Mob, WikiChoice) recently wrote for Plywood People. I thought it was incredibly inspiring.
Let’s not change the world. Let’s not end poverty or wipe human trafficking from the… Continue

While most teens were making plans for their summer vacation, Conner Cress was colliding with a world of poverty that would forever change his life. Looking through a magazine, he saw pictures of incredibly malnourished and dehydrated babies in Africa - and he was wrecked. He told his friends (also in high school) about the article, and they decided to do something instead of sit back and watch people die from dirty water (or lack of it). They founded DryTears by making simple rubber bracelets… Continue

we're celebrating Christmas by candlelight in 2020. as a neighborhood, we have a specific night set aside during the Christmas season to leave all our lights off and join together in the streets for celebration. of course, being December, the sun sets quickly, but with the recent renovations of sustainable energy in the community and the street lights run off of biodeisel fuel from the community garden waste, there's plenty of light to see. there is no gift exchange - we have everything we… Continue

I will admit. I use to be one of those people - you know - the ones who believe in wasting as much energy as possible and who laugh at "Earth Hour" and see no reason to watch the temperature of the AC. However, the more I study culture and learn about those who have nothing, the more I see the necessity of saving as much as possible as well as the ridiculous nature of excess. I am incredibly interested in the trend of biodiesel as a form of energy, but… Continue

Renewit is a self proclaimed think tank providing sustainable energy to areas where electricity is limited or impossible. According to their website, "a third of the world's population are without basic power or lighting. Over one third are illiterate." With their products, they believe communication will improve and lighting will offer better opportunities for employment and… Continue

in 2020, i'm pretty sure dinner will look something like my husband cooking a meal ripe with vegetables and spices from our garden. complete with a free range chicken we raised ourselves. we won't be eating alone, though. in the past few years, we've taken to the community around us and consider our neighbors as part of our family as well. it works out perfectly. if our crop isn't as good one year, and someone else has plenty, we share. one chicken is a lot for just a few people - but can be… Continue

This is a bit of evidence in motion.

My husband and I plan to move within the next month or two to the inner city. Our hope is to plant a garden in our backyard not only for our benefit, but for the benefit of the neighborhood. Starting small, we could provide education on gardening and the essential knowledge of which crop to grow during which season. Our overall goal would be to provide and maintain a community garden where everyone could access and benefit from the food grown… Continue