OUR Evokation, OUR Gameplay, OUR Expansion

OUR Gameplay: The expanded gameplay system…

Staying in touch after Season 1

Hello, everyone!
I have made a platform (in Facebook) for all of us to stay in touch, even if not "friended". It is a user group under the name "EVOKE Founders, Class of 2010", and it is for now open.
After the 20th, it will go semi-dark and it will become "secret", accessible by invitation only.
It has a board and everyone is welcome to…
Continue

One of the things I believe need to also evolve for Season 2 is presentation, and I think the comic book format needs to be improved upon. Perhaps not a fully fledged animation or live action productions, but maybe a "motion comic", akin to the work done by Budget Monk Productions with their masterpiece Broken Saints.
It is but a small improvement over the current format, but it provides for a more engaging…
Continue

We are EVOKE.
Each and every one of us. Big or small. Poor or rich. Asian and Latin. White and black. Young and old. Left and right. Progressive and conservative. Religious and atheist. Illiterate and intellectual. Citizens of the world dead, alive and to be born.
All those who ever have or ever will care enough to look at the world and decide it is not enough to be in the sidelines, pointing fingers and criticizing. Each and every one of us who…
Continue

There are many great issues and challenges EVOKE can tackle, but there is one that takes importance over all others.
EVOKE itself.
Firstly, it needs to be a bigger and more comprehensive place to exchange ideas, and that means implementing a zero tolerance for censorship with the sole exception of extreme cases, such as blatant racism, constant badgering and/or insulting other members, etc.
Secondly, the Terms of…
Continue 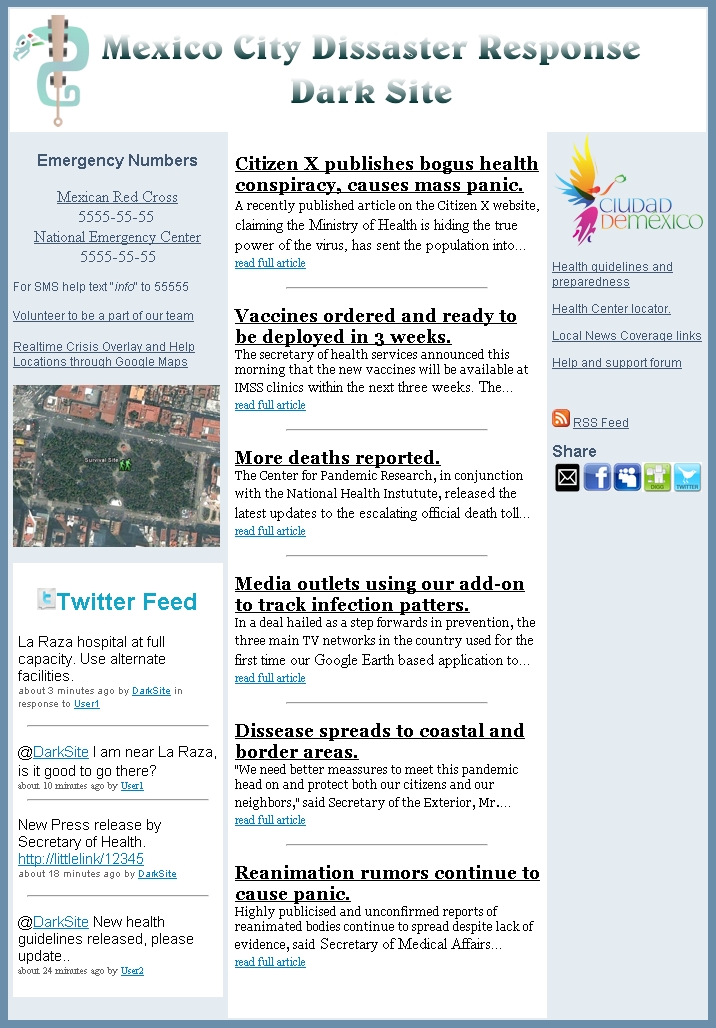 Keeping in mind I'd get to form a team and select the people involved, I would have people with high technical knowledge to handle the stuff not many people know how to do, while I worry about the logistics.
Team members would be:
Programmers
Doctors
Pandemic Experts
Media cooperation
Web designers (if a dark site is not yet ready)
The plan would involve first a dark site -…
Continue

The EVOKE final stretch and the fallacy of points farming.

So, 10 days left to change the world.
And 10 days where I feel like I have to force myself to see this through to the end.
The reality is I have been loosing my will to EVOKE. The reasons are many: Agent feuds, bans, administrative abuse, content censorship, people trying to force their own vision unto your evocations, points farming, Jane's reluctance to be a part of her own game, the increasing focus on EVOKE 'top dogs', etc.…
Continue

Panic during a pandemic: The not so silent killer.

The Tao Te Ching Says:
Gravity is the source of lightness,
Calm, the master of haste.

A lone traveller will journey all day,
watching over his belongings;
Only safe in his own bed may he lose them in sleep.

So the captain of a great vessel should not
act lightly or hastily.
Acting lightly, he loses sight of…
Continue

Emergency-prepared Mexico of the future

April 15th, 2020
It is 2020 and Mexico City, after decades of neglecting resiliency programs, is about to unveil it's new PESCA (Programa de Emergencia y Supervivencia Citadina Avanzada or "Advanced City Survival and Emergency Program"), in which yours truly took a part in designing.
This program was designed to provide support and facilities in case of city-wide emergencies and natural disasters, with a primary focus on seismological…
Continue

Arizona, profiling and the little racist Governor that could.

I have a rant to share, and it has to do with Arizona's bill SB1070, which was signed into law a couple of days ago. But before I get into it, allow me to begin with a bit of history and why this bill is so personal to me.
I am a Mexican and I am engaged to be married to a wonderful, intelligent, loving and smoking hot woman. The twist? She is an American. Now, other than one time and for no more than a couple hours when I was two years old, I have never set foot on the…
Continue

Happy 100th birthday to me!

August 7, 2076
Wow... I just can't believe I made this milestone, yesterday. 11 more years and I will be as old as Bilbo Baggins was when his nephew Frodo set forth in his adventure out of The Shire. Yes, yes. Old, commercial fantasy book, I know. But it is still a story worth telling, and if we leave anything for our younger generations, it is that: stories.
Our memories become theirs and our knowledge passed down from one person to the next. So…
Continue

EVOKING all agents! This is important and will only take 5 minutes of your time.

I am calling on everyone who stumbles on this post to help Agent Edayis.
This coming May 5th through 7th, the Davos Debates will be held at Dar es Salam, Tanzania. World leaders will be meeting to discuss on a World Economic Forum on Africa, and they are welcoming questions from everyone all over the world. A big factor on what questions go through, is votes.
And Edayis has a…
Continue

I'm not sure if this is cheating a little bit. While I did redo all the finishing and exterior for this post, this is an item I already had made. However, I still wanted to share it for my ACT8 mission. After all, Sarah did share her bow for her LEARN2 mission. ;)
So I give you my handmade katana (and please excuse the quality, my webcam sucks):…

The traditional knowledge I chose to pick up this week comes from the indigenous women of Oaxaca, Mexico.…
Continue

It has been quite a few days since I began this assignment, and the sad truth is: I got nothing to report.
After researching all over the place, I have learned that Mexico has absolutely no resiliency plans beyond construction codes that are rarely (if ever) followed. The reason? Lack of political motivation to do anything about it. Is it a surprise to anyone when, just last year, Mexico had a terrible score of 3.2 in…
Continue

Many remember the earthquake that hit central Mexico in 1985. Not least of all, the people of Mexico city, and the lessons learned from that catastrophe will not soon be forgotten. You see, Mexico city is particularly vulnerable to telluric movements for two main reasons:
1. Central Mexico is located in the middle of several tectonic plates
2. The ground in the Valley of Mexico is composed primarily of soft…
Continue

It had been a long while since EVOKE Agent Hiryu had been to Africa.
During his time there, he had met another local EVOKE agent, Codename: Ngami. From her work, he knew her real name was Adebowale, but as EVOKE protocol indicates, they preferred to refer to each other by their agent codename.
Ngami had been working tirelessly on the now dilapidated city of Eldoret. Warlords had completely leveled the town a year back, and as a long time survivor…
Continue

Quick post.
I knew I had heard this one before in my Melodic Metal collection, so I looked it up and decided to share. Hope you enjoy. :p
After Forever - EVOKE
So wild, so beautiful and…
Continue

Mexico and the Blue Heart campaign.

Yesterday, April 15th 2010, Mexico became the first country to be a part of the U.N. based 'Blue Heart' campaign, targeted to "Create awareness of the problem and inspire those with decision-making power to effect change".
The UNODC lauded Mexico for being the first country to jump on board with the campaign, where a dozen buildings were lit in blue light as a "symbolic act of awareness".
More on the news can be found here:…
Continue