Using UV radiation is known to be an effective way to sterilize water. Why? Because the radiation kills the DNA of any living organisms in the water, thus making them unable to reproduce in the human body- or anywhere else, for that matter. The micro-organisms aren't dead, but they can't make any more of themselves!! Hahaha

And if you think about it, what do many of the African nations have plenty of? Well, I'm in Ghana right now, and I would argue that it is SUNSHINE. Plenty of UV… Continue

wait what is that skyscraper doing? is that water?

(in order to facilitate water purification, the tower will be made up of several circular tanks filled with brackish water
(water that has more salinity than fresh water, but not as much as
seawater), which will be enclosed in spherical greenhouses. Using… Continue

I picked an organization that was started in my own hometown called Water 4 Water. This organization raises money by selling plastic and metal water bottles to provide children in Africa with water. …

"Don’t fight culture (If people cook by stirring their stews, they’re not going to use a solar oven, no matter what you do to market it. Make them a better stove instead.)" This rule is incredibly useful and can apply to almost any situation. You cannot simply exchange a people's previously used items for newer, foreign things; they…
Continue

Ten years from now, I will be a lead game designer in a studio specialized in creating live action pervasive, roleplaying and alternate reality games. My personal goal as a designer will be to allways have some kind of message and story in our games. This way, we will have enabled the players of our games to experience various critical situations from many points of view and aslo to take action in order to change them.
In the process, I will have uplifted and enlarged the slovak…
Continue

Getting Clean Water to Scale in Bangladesh

For my ACT4 post, I decided to write about Grameen-Veolia Water Ltd., a joint venture between Grameen's health and hygiene subsidiary and Veolia Water, a French company. Operated as a social business venture (similar to the joint venture between Grameen and Danone I would imagine) the water purification plant provides water to the area at a nominal cost, which helps to maintain the facility and plan expansion into… Continue

Thinking Outside the Box and Into the Urinal

There's some things you hear and have a hard time really processing, and using urine as a source of cheap hydrogen fuel via electrolysis is far up on the list.

Quick stats: Potentially 90 miles to a gallon. Water takes 1.23 volts to be split and release hydrogen, while Urea only takes about .37 volts, making it more efficient for hydrogen production.

Not long ago the US Military working in conjunction with TARDEC (Tank-Automotive Research, Development and Engineering Center) designed a system that allows Army vehicles to create perfectly drinkable water via the condensation of the engine exhaust system.

The system creates on average 3.5 gallons per day.

There are over… Continue 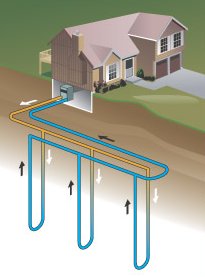 This is an example of what geothermal heating in a building would look like. The pipes are filled with a type of liquid that absorbs heat--so in the summer, unwanted heat is absorbed into the liquid and stored there. In the winter, the pipes draw heat from the earth around it to warm up the…

The Cry Heard Round The World

Economy tops environment as bigger concern!
As the millennium children wake up out there stupor from all mindless media, they will one day realize todays news of exanding oil drilling over any cost of more destruction to the enviorment is something they will never forget.

AT WHAT COST!… Continue

"Understand by observing the environment, infrastructure, culture and lives of people by being there." -- from…
Continue

While generally I don't like the idea of water desalination (I'm a fan of learning how to make the most of what's available instead of forcing the system to work for you) I recognize that at least in the short term it may become a necessary part of life around the world. To that end, why not try to make this process as benign as possible?

I found a company, Water Standard, who is trying to do exactly that. Their idea is to get a tanker-type… Continue

A Happy, and Renewable, Holiday Season

While I don't actually celebrate Christmas, I do enjoy the lights and all the festive decorations around my neighborhood. It has been some time since virtually all Christmas lights phased to LED bulbs, but even with the massive reduction in power consumption, when a couple million people decide to string out hundreds if not thousands of lights a piece, you have to get more energy from somewhere.

When I think of 2020, I see solar power being the prominent source of energy in America. From working in sports, I
see many of the stadiums that go unused throughout the year as a major provider
of solar energy. Imagine if the
seats that were in those empty stadiums were able to capture the power from the
sun and send it back into the grid.
Not only would the…

So it's not completely new, but I would want to design my own homemade wind turbine. I've seen a couple people on the EVOKE network give it a shot, and I've found a couple website that have plans such as My DIY Wind turbine, TheBackShed.com and Instructables.