This week I would like to share an amazing story with you! It is about a project of UNESCO which is focused on gender equity in education. 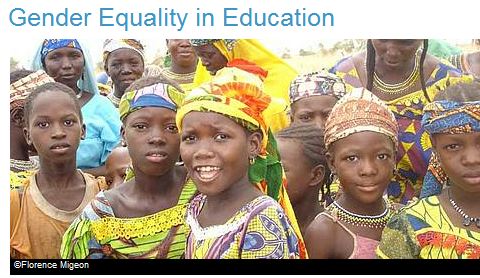 When i visited the the WomenWatch news feed the latest news was about a 20 years woman, called Emini, who lives in the so-called “House of Hope”, where woman can live (also with their children) for a certain period of time after leaving prison. Emini was originally sentenced to three years in prison from running away from her abusive…

eat many things, like meet, fish and other things

I´ve chosen an article about domestic violence against women in Gaza.
The article says, that there are still over 30% in the Gaza Strip that are exposed to (pysical) abuse in their homes, while there are 15% exposed to sexual abuse and nearly 75% exposed to pschological abuse, too.
The main reason for this - according to the report - is that, while the Israeli blockade halted imports and has cut jobs, the Gazan families have to survive with even less than before, which in the end…

If I had the chance I would spend my money on women's health.
In addition I have found a video which I find very interesting
It is a disease that can be treated easily if enough money and doctors were available.

This week we should choose a story from WomenWatch. I chose the story „HEALTH: Treat the mother - save the baby”
This story is about to save the mother’s health during pregnancy and that’s the key to the babies’ survival.
The traditional childhood killers - measles, pneumonia and diarrhoea - are all down; even where malaria is still rife, treated bednets are saving children’s lives. But as deaths from other causes drop, mortality in the first month of life looms ever…

On May 23 and 24, 2012 Egypt started the first round of electing a new president. The article I dealt with is about women and their role in the revolution and in the votes taking place at the moment.
In Egypt's Arab Spring, women played an important role fighting for freedom and for their gender's rights on the streets and on the internet. But what happened afterwards? Did their efforts pay off in the end?

For a little moment it seemed as if things would change, but then the…

The future of money will be influenced by megatrends

A new study giving a taste of the future of money. Which megatrends influence the financial sector in the next few years? Following points will be very important:
1. Globalization
2. Emerging Markets: Here are mainly the BRIC-Countries (Brazil, Russia, India and China) to mention
3. Digital transformation: The financial sector is more dependent from technology renewal than other sectors.
4. Mobile Media and mobile lifestyle: In Year 2015 internet using will done 50% on…

The internet article
http://www.unfpa.org/public/cache/offonce/home/news/pid/10804 of the UNFPA describes the reasons and possible solutions why still today more than 800 women and 20,000 children die every day caused by the lack of commodities in the situation of child birth. Also, cotraceptive methods to avoid unwanted pregnancy are treated in the article. Contraceptive methods like the condom are known but…

IMAGINE6 - Mission 6: Helping a family out of poverty

My parents and I donated $30 in total for this project: http://www.globalgiving.org/projects/a-hundred-friends/

"This project empowers local women to tackle poverty, improves education, and fights daily difficulties in their lives to bring a brighter future by accessing to income-generating work."

Being born in China I felt the responsibility to look for projects supporting Chinese women. Scanning through all active projects I came across this one: http://www.globalgiving.org/projects/a-hundred-friends/

"Empowering a woman is empowering a family"
This projects aims to equip local textile craftsmen with the necessary items, who would then be hired to create traditional Tibetan textiles.…

I own an Ipod which is why seeing the word "POD" on this site http://www.kickstarter.com caught my attention. I briefly scanned the description and decided to support it by donating a dollar. What impressed me most is the idea of carrying renewal energy with me when I'm outside. Renewable energy concepts usually catch my attention since the earth is slowly running out of its natural resources. What people need most nowadays is to find out how to…

I have read many articles of the UN gender equality newsfeed page. And I've finally decided on the article "American girls raise awareness and money to fight child marriage in four countries". Thousands of American girls between the ages of 13 and 18 years fighting against the marriage of children. These girls help the UN Foundation's Girl Up campaign in four countries, Ethiopia, Liberia, Malawi, and Guatemala.…

Teen precnancy
Teen pregnancy is one of Madagascar's severe issues. Girls as young as 12 or 13 years old get pregnant because they lack education and birth control. Often the birth comes with a lot of other difficulties such as travelling to far away hospitals, high death rates right after giving birth and post-birth infections leading to dangerous diseases and sometimes even death. UN Population Fund revealed that the Sofia region has one of the highest death rates in the country, with…

My favorite solution is from the Futurist Douglas Rushkoff. He speaks about the alternative currency systems like "complimentary currencies".
In his article "Life Dollars: Finding Currency in Community" he speaks about "Life Dollars",an electronic currency used in the Pacific Northwest. Life Dollars are not exchanged for traditional currency. Instead, members of the Exchange earn credits by performing services or providing goods to one another.

Here is an example for such…

“There are a lot of special things about outbreaks, but most important is that they're unfolding events. Nobody really knows where they're going and, especially in the beginning, there's high outrage and high concern in the absence of knowing what the hazard is”

– D*** Thompson, Team Leader, WHO Pandemic and Outbreak Communication
this is a quote from the doc**ent.

For Season 2 the evoke network should make one of the missions about racism in our world today, and should encourage famous people to join.

For Season 2 the evoke network should make one of the missions about racism in our world today, and should encourage famous people to join.